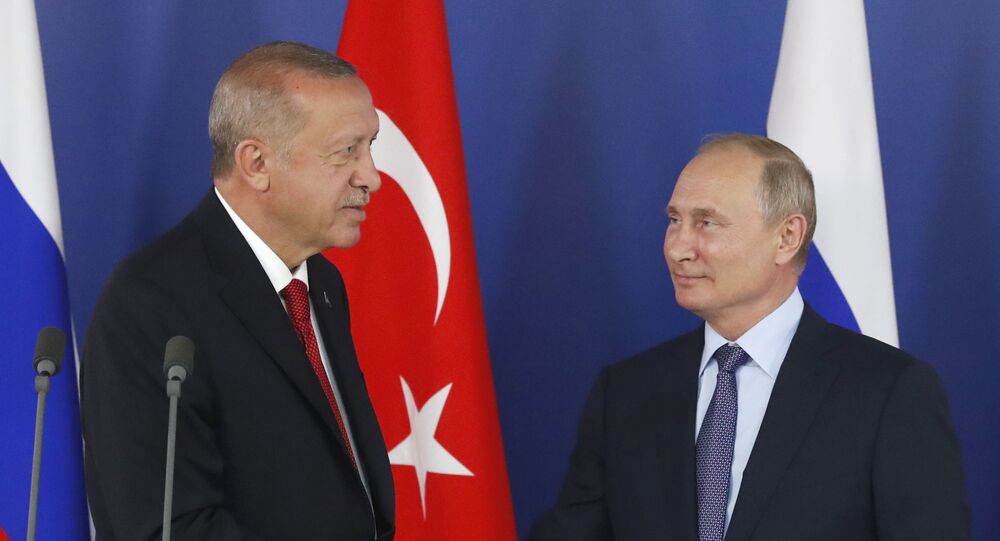 Russian President Vladimir Putin on Tuesday will receive his Turkish counterpart, Recep Tayyip Erdogan, in the Russian resort city of Sochi in order to discuss recent developments in Syria as well as bilateral relations.

The Turkish military operation against the Kurdish militia in northeastern Syria is set to be high on the agenda of the talks between Vladimir Putin and Recep Tayyip Erdogan as the two presidents are scheduled to meet in Sochi, Russia, later on Tuesday.

According to Russian Foreign Minister Sergei Lavrov, the two heads of state will mainly focus on the task of ensuring Syria's sovereignty and territorial integrity, fighting the remaining terrorist groups and promoting the peace process by holding the first session of the Syrian Constitutional Committee.

On Friday, Erdogan said that he would discuss with Putin the creation of a 32-kilometre (20-mile) wide and 444-kilometre long safe zone along the Syrian-Turkish border.

The Turkish president also expressed a willingness to reach an agreement with Russia on the possible withdrawal of Kurdish forces from the northern Syrian town of Manbij.

A 120-hour ceasefire agreement, which was announced on 17 October by US Vice President Mike Pence after talks with Erdogan in Ankara and expires on Tuesday, will also be high on the agenda. Kremlin aide Yury Ushakov said on Monday that further developments in Syria would be a subject for discussions.

Aside from the Turkish offensive, the two presidents will also touch upon bilateral relations, according to Kremlin spokesman Dmitry Peskov.

Turkey launched Operation Peace Spring in northeastern Syria on 9 October with a stated goal of creating a "safe zone" along the border and clearing the area of the formerly US-backed Kurdish militia, viewed by Ankara as terrorists.

The offensive has faced widespread condemnation from across the globe, with a number of countries either imposing sanctions or introducing an arms embargo on Ankara. Damascus has likewise slammed the military campaign, calling it an invasion and violation of the country's territorial sovereignty.

On 17 October, Erdogan and Pence reached an agreement on a 120-hour ceasefire in northern Syria to allow the withdrawal of the Kurdish militia from the area, but the Turkish side has subsequently warned that Ankara would resume its operation if the deal is breached, or the Kurdish militia do not leave the area by the agreed upon time.