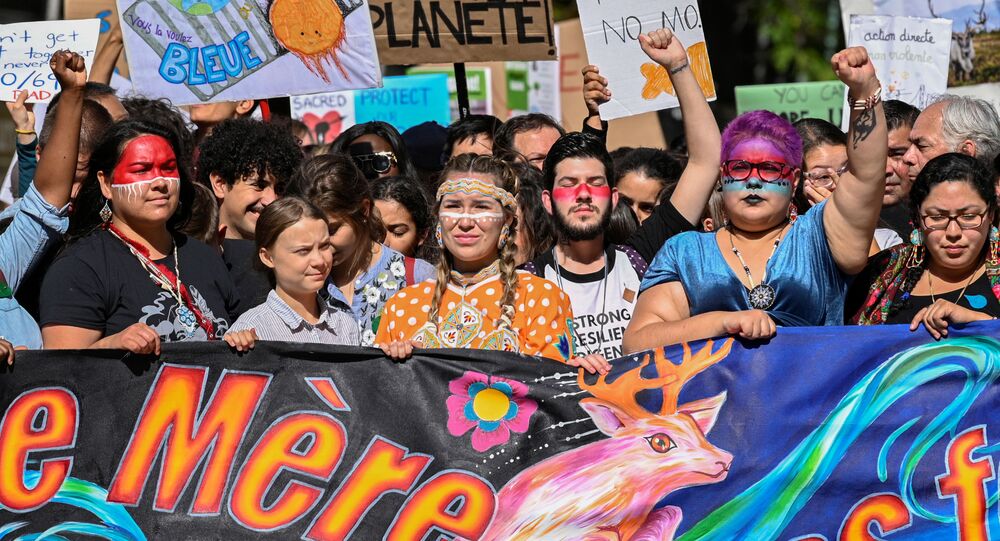 The rally caused a massive disruption of transport in Montreal, with bus lines and trains cancelled and streets closed, local media reported.

Hundreds of thousands of Montreal students abandoned their classes to participate in a “climate march” across the city on Friday. Although there is no official count, organizers claimed that as many as 500,000 joined the demonstration, according to the Montreal Gazette.

The demonstration was led by environmentalist ‘celebrity’ Greta Thunberg, a teenager who earlier this week turned heads delivering a strikingly aggressive speech to world leaders at the UN General Assembly.

The Montreal province’s largest school board, Commission Scolaire de Montreal, cancelled classes for all of its 114,000 elementary and high school students, the Gazette report says.

What a nice #FridaysForFuture in #climatestrikecanada, in Montreal. Had the pleasure to see @GretaThunberg and @ManonMasse_Qs. pic.twitter.com/5jr4HsHfYS

​According to the report, the climate change demonstration disrupted city traffic, as motorists were told to avoid the large area between Berri and Peel Sts., as well as between St-Joseph Blvd. and de la Commune St. Several streets and at least one bridge were closed to traffic.

More than 50 bus lines and trains were cancelled, and many had routes changed, the Gazette reports. City and commuter transport fees were waived in an effort to ease congestion.

​Thunberg delivered a speech displayed on monitors along the route of the march. In her speech, she attacked Canada and her homeland of Sweden, calling each country “allegedly a climate leader,” but saying that “in both cases, it means absolutely nothing,” before turning on the world leaders she previously lambasted in New York.

In a characteristically abrasive manner, Thunberg claimed that world leaders’ “world view or their interests or whatever... is threatened by us.”

“We’ve become too loud for people to handle so they try to silence us,” she declared, adding that “we should also take that as a compliment.”

​Thunberg threatened that “once [world leaders] start to take responsibility, and do their jobs, we will stop worrying and go back to school and go back to work.”

Canadian Prime Minister Justin Trudeau, who had a 15-minute private meeting with Thunberg, was attacked by a protester who threw eggs at him as he joined the march. Another protester shouted at the prime minister earlier that day at a campaign stop, calling him a “climate criminal.” Police detained both protestors, according to Reuters.

Environmental activists are demanding that world leaders take drastic measures to stop climate change, citing scientific findings. Notably, the advent of rapid global warming as a result of human-induced climate change is still in debate, as some say that the emergency is merely another long-term geological oscillation in the evolution of the Earth.

​Greta Thunberg gained media attention in late 2018 by standing for three weeks before the Swedish Parliament with a sign reading “School strike for climate.” This year, her notoriety skyrocketed with an invitation to address delegates at the United Nations. Her sudden spike of fame and her willingness to move across the globe to further the agenda of climate change mitigation has led some to accuse her of fronting a much larger campaign organized by an as yet unidentified third party.

French President Emmanuel Macron warned that "such very radical positions are liable to antagonise our societies," while his secretary of state for ecological transition, Brune Poirson, said "Greta Thunberg mobilizes despair and the hatred of others."