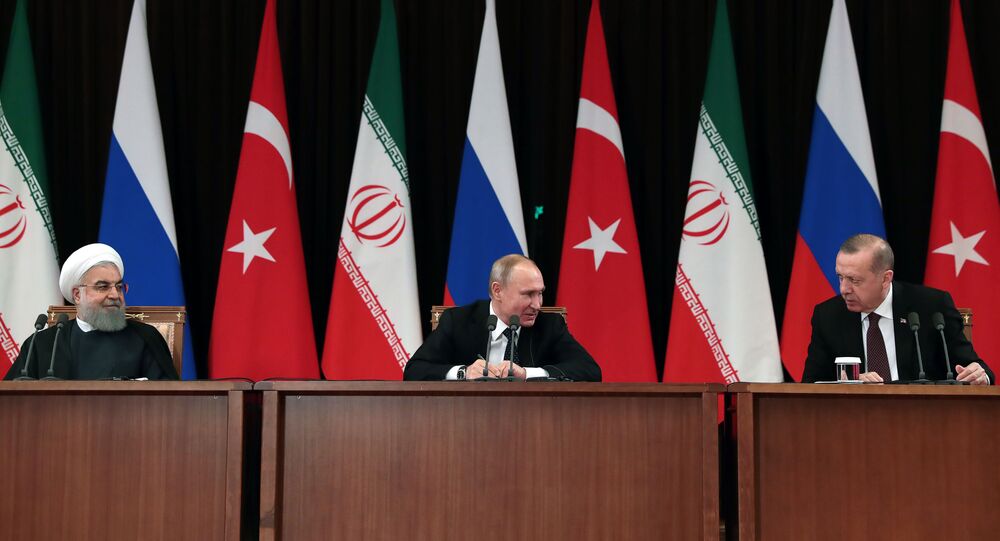 The Presidents of Russia, Turkey and Iran gathered in Ankara on Monday for the 5th Trilateral Summit as part of the Astana format of meetings. This time Vladimir Putin, Recep Tayyip Erdogan and Hassan Rouhani discussed the current situation in Syria as well as some regional issues.

Russian President Vladimir Putin said that US troops are staying in Syria illegally, adding that he and his Turkish and Iranian counterparts hope that Donald Trump's decision to withdraw the troops will be implemented. Mr Putin also said that de-escalation zone in Syria cannot serve as a springboard for provocations and that joint efforts are needed to counter terrorist threat in Idlib. The Russian President stressed that measures taken by Russia, Turkey and Iran resulted in a reduced level of violence in Syria.

Turkish President Recep Tayyip Erdogan, for his part, reaffirmed that the Astana format remains the sole platform for the peaceful settlement of the Syrian conflict.

"The Astana format for resolving the Syrian conflict is producing very effective methods. We are the only platform to carry out these tasks. To ensure peace and stability in Syria, we need to work even better," Erdogan said.

Speaking during a press conference, Iran's President Hassan Rouhani said his country insists that US troops must leave Syria as soon as possible, adding that sovereignty of Damascus must cover the eastern bank of the Euphrates River. Mr Rouhani also said that Tehran regrets that it has not yet been possible to fully implement the agreements on the Idlib province and added that territory controlled by terrorists has only increased.

Russian President Vladimir Putin, Turkish President Recep Tayyip Erdogan and the President of Iran, Hassan Rouhani, held a press conference after a trilateral summit as part of the Astana format, which took place in Ankara on Monday.

The talks focused on further joint efforts by the three countries to solve the Syrian crisis as well as other regional issues. This was the fifth such meeting for Putin, Erdogan and Rouhani since November 2017.

The next, sixth Russia-Iran-Turkey summit on Syria will be held in Iran, according to a joint statement adopted by the presidents of the three countries, Vladimir Putin, Hassan Rouhani and Recep Tayyip Erdogan at a meeting in Ankara.