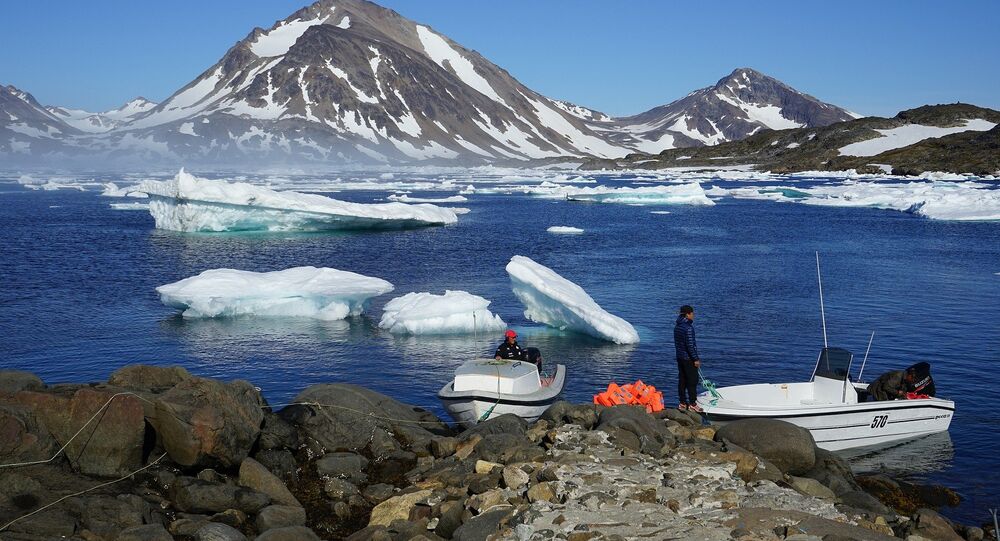 Donald Trump has floated the idea of buying Greenland from Denmark. Sputnik looks at other pieces of territory which were bought or ceded from one nation to another.

The US President is due to visit Copenhagen next month and it is thought he may mention to the new Danish Prime Minister, Mette Frederiksen, his interest in purchasing Greenland - a vast territory in the Arctic Circle which dwarfs the size of Denmark, which has owned since 1814.

That is his interest in purchasing Greenland for the United States, not the Trump Corporation.

Soren Espersen, an MP with the right-wing Danish People's Party, told the Jyllands Posten newspaper: "If it is true that he (Donald Trump) is working on this idea, this is a final proof that he has gone mad."

Trump wants to buy #Greenland? Let’s make him find it on a map first.

​Greenland - the name is ironic, considering it is largely covered by ice and snow - measures 820,000 square miles, four times as big as California but has a population of only 50,000. It also houses a US military base.

Its strategic position, and the possibility that it sits on millions of tonnes of hydrocarbons, makes it a lot more valuable than one might think. In 1946 then President Harry Truman tried to buy it from Denmark for US$100 million but his overtures were rejected.

But what other chunks of territories have changed hands in the last 300 years?

If you are mocking Trump for wanting to buy Greenland, remember that USA had purchased Alaska from Russia for $7.2 million in 1867.

There are precedents for deals between Denmark and the US, although they are significantly smaller than Greenland.

The Danes had taken possession of the Caribbean colonies of St Thomas, St Jan (now St John) and St Croix in 1672 and - like Britain, France and the Netherlands - used their colonies to cultivate sugar using slaves imported from Africa.

Interestingly, Denmark, of which Greenland is an Autonomous territory, was maybe the last country to sell land to the US - the (now) US Virgin Islands, were previously the Danish West Indies.

​Slavery was finally abolished on the islands in 1848, 15 years after it was ended in the British West Indies.

The Danish West Indies became an embarrassing reminder of the slave trade and in 1917 they were sold to the US for US$25 million in gold coin.

Washington rebranded them the US Virgin Islands and they are nowadays a luxury tourist destination for wealthy Americans.

Alaska is 663,000 square miles of territory in the Arctic Circle and was a far flung colony of the Russian Empire in 1867, when it was sold to the United States.

At the time Alaska’s greatest exports were fish and fur pelts, although now it is fertile territory for oil and gas production.

Perhaps the greatest geopolitical disaster in Canadian history was the Alaska Purchase of 1867, allowing the United States to effectively outflank Canada in the north-west & contributing to their comparative power & influence in the Arctic. pic.twitter.com/O33fsMt2LX

​The Russian Tsar Peter the Great had dispatched the great explorer Vitus Bering - who gives his name to the straits between Alaska and Russia - to the area in 1725.

By 1859 Russia had lost interest in Alaska but did not want it to fall into the hands of their greatest rival at the time - Great Britain, who ruled neighbouring Canada.

#greenland a bit wacky but the US buying Greenland makes sense and is revealing. Greenland is huge and is very close to the US like the Alaska purchase it has a very low population is cheap & has large mineral deposits. It also proves the adminstration believes in global warming

​So they offered it to the US and, after several years of haggling, Washington agreed to purchase it for US$7.2 million, a huge sum in 1867.

The Senate approved the purchase, President Andrew Johnson signed a treaty but Alaska did not become the 49th state of the United States until 1959, a few months before Hawaii.

In the early part of the 18th century control of North America was being contested between Britain and France.

France controlled Quebec and a huge stretch of the centre of the United States - from what is now Montana, right the way down to New Orleans.

But after losing the Battle of the Plains of Abraham in 1759, France had lost Quebec and its interest in North America dwindled.

Many people think the nation would be better off without the states of the Confederacy. But judging by this map, it's the Louisiana Purchase that really screwed things up. pic.twitter.com/MnRVqZEYVP

​In 1803 the United States agreed to buy France’s remaining possessions - 830,000 square miles of prairie, mountain and Mississippi delta - for US$15 million, what amounted to four cents an acre.

It proved to be the bargain of the century, doubling the size of the US and eventually turning it into a super power.

General Horatio Gates told President Thomas Jefferson: “Let the Land rejoice. For you have bought Louisiana for a song.”

The Louisiana Purchase worked out pretty well. Same with Alaska. I mean, why not Greenland?

​Of course the Native Americans who lived on the land, many of whom had fought on the French side in wars against Britain, were completely ignored and they were to suffer greatly under the US government.

French settlers in New Orleans and Baton Rouge - known as Cajuns (a corrupt of Acadia, the early French colony in Nova Scotia from where they were they had migrated) were also unhappy but eventually became assimilated.

Hong Kong, which is currently undergoing waves of protests, was handed back to China in 1997.

But how did it become a British possession in the first place?

The story is one of the most sordid in the dark history of the British Empire.

Wrong. Hong Kong is part of China as it was handed back to them by the British in 1997 after the 100 year lease had expired. Stop spreading misinformation ! Concentrate in YOUR own affairs like your $22 Trillion debt. https://t.co/roTtsrZ9X6

​In the early 19th century the East India Company - a private British company -  was basically a giant drug pusher, growing opium in India and exporting it to China, where it created hundreds of thousands of addicts.

The Chinese Qing dynasty objected to this, sparking the First Opium War in 1839.

British ships were sent to China to back up the East India Company and, after defeating the Chinese, the Qing emperor was forced to hand over Hong Kong, a promising but undeveloped harbour in the south of China, “in perpetuity”.

One of the point is China must cede Hongkong and surrounding island to United Kingdom.

And later on 2nd Opium war the Hongkong Colony extended their lease for 99 years which expired in 1997.

​After the Second Opium War, a further treaty was drawn up in 1898, in which Hong Kong was formally leased from China for 99 years.

Nowadays nations do not buy and sell territory like they may have done in the 19th and early 20th century, but land remains valuable and there have been some controversial commercial deals which have been seen as akin to imperialism.

On August 1st last year, #SantiagoMaldonado a 28-year-old fine arts graduate was attending an Indigenous Mapuche protest against the seizure of ancestral lands by multinational fashion giant Benetton. When police arrived, Santiago was bundled into their van and #disappeared. pic.twitter.com/tEpaZtjJp5

​In 2017 demonstrator Santiago Maldonado, who had been protested about the treat of the Mapuche Indians, was found dead in a river after clashing with police.

In 2009 South Korea’s Daewoo Logistics cancelled plans to lease 3.2 million acres of arable farmland in Madagascar after local opposition. The land would have been used to grow food for export to Korea.