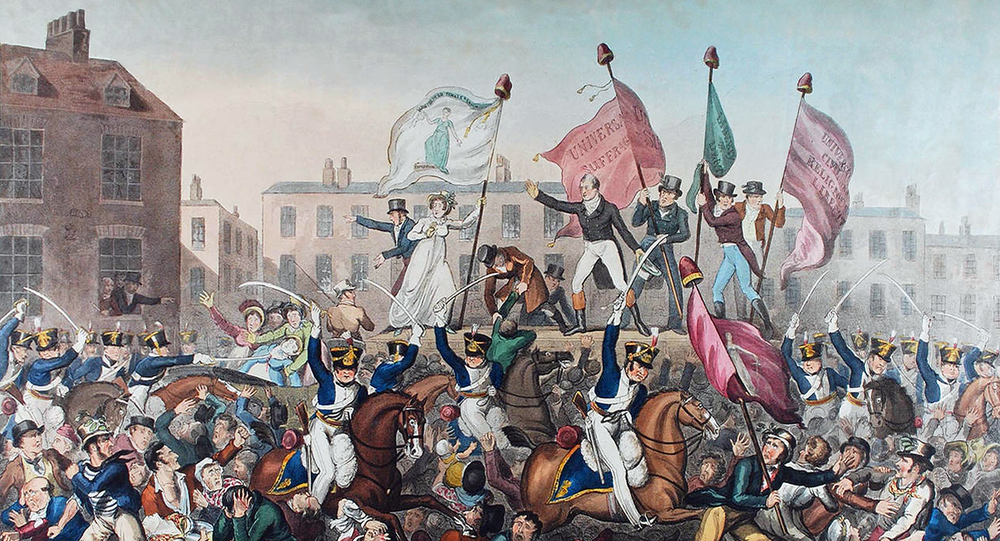 On 16 August 1819 a cavalry charge against a crowd of political protesters in Manchester led to at least 17 deaths. But the significance of the incident remains mired in controversy.

Conservative historian Allan Mallinson has accused the Left of “weaponising” Peterloo and exaggerating its importance and the BBC has been accused of excessive coverage of the 200th anniversary with no less than seven radio programmes devoted to it.

Last year veteran director Mike Leigh brought out a new film, Peterloo, starring Rory Kinnear as radical orator Henry Hunt, whose stirring speeches stirred up the crowds on the day of the bloodshed.

This Friday, the 16th of August marks 200 years since the Peterloo massacre. We remember this watershed moment in our city’s history on this season’s away shirt #peterloo2019 pic.twitter.com/BaJhXHDWol

​Leigh said all children should be taught about Peterloo at school and added: “They will know about 1066 and Magna Carta and Henry VIII and his six wives and they may be told about the French revolution and the battle of Waterloo but Peterloo was a major, major event which resonated down the 19th century into the 20th century in the context of democracy and suffrage.”

Today marks 200 years since the Peterloo Massacre, when many w/class people were killed or injured for the crime of demanding a political voice.

Many on the Left will today pay tribute to them. They will then continue with their efforts to overturn the 2016 referendum result. pic.twitter.com/EODpXuqPPA

​Mr Mallinson said that simply was not true and claims it was a freak incident, a simple case of “ineptitude” rather than any government-ordained attempt to wipe out dissent.

On the Unherd blog, Mr Mallinson said it was certainly “brutal”, but did not compare with repression in countries like Tsarist Russia or 19th century France.

“Only in England do they call that a massacre,” sneered one French diplomat at the time of the incident.

Labour Leader, 14 Aug 1919, remembers the Peterloo Massacre as 'The Baptismal Hour of the Labour Movement.' It commemorates the 100th anniversary of the event, which occurred at St Peter's Field, Manchester on 16 August 1819 https://t.co/Vato8sD96Y #OTD #1919Newspapers #Peterloo pic.twitter.com/2zfoZqrMa1

​So what exactly did happen at Peterloo?

In the aftermath of the Napoleonic Wars, which had cost Britain a great deal of money, the government of Lord Liverpool imposed austerity measures and resisted electoral reform.
Manchester was at the heart of the booming cotton industry and its population had grown immensely but most of the workers in the city’s cotton mills earned little money and were totally unrepresented by the politicians of the day.

​On 16 August 1819 a crowd of up to 100,000 people descended on St Peter’s Field in Manchester to hear Henry Hunt and other speakers demand universal suffrage and the repeal of the Corn Laws, which artificially inflated the price of grain and as a result flour and bread.

The Manchester magistrates, headed by a wealthy landowner William Hulton, authorised the arrest of Hunt and sent in the yeomanry, a cavalry unit designed to control civil unrest.

​The soldiers, whose sabres had reportedly been specially sharpened a few days earlier, attempted a cavalry charge to disperse the crowd but 17 people - including several women - were trampled under the hooves of their horses amid widespread panic.

Another 400 people were injured and Mancunians vilified Hulton, who was forced to turn down a parliamentary seat the following year because his name remained dirt.

Next Friday is the 200th anniversary of the Peterloo massacre.

The free 'Peterloo and Parliament' exhibition is now open - come along and find out more about this important event in the struggle for the right to vote. https://t.co/Oxzcjz6K2c#Peterloo2019 pic.twitter.com/PAnl7Tx9rZ

​But nobody - not Hulton or any of the soldiers - were held accountable for the deaths and very little changed as a result of the massacre.

It took another 13 years before the Reform Act abolished “rotten boroughs” and increased suffrage, while the hated Corn Laws were finally repealed in 1846.

Universal suffrage would take another century to come into effect.

So after years in the planning and months in highly skilled stone masonry and construction the #peterloo memorial is finally completed on our @mcr_central forecourt ahead of the 200th anniversary on Friday pic.twitter.com/HR3z31ya4x

​A memorial to mark the Peterloo massacre was unveiled in a very low key ceremony on Tuesday, 13 August.

The £1 million memorial, outside Manchester Central conference centre, has already been criticised by disabled groups who say it is not accessible.

Mark Todd, a Manchester-based accessibility adviser, told the Guardian: “As it’s currently designed, everybody is stood at the top speaking down to disabled people at the bottom. If you wanted the worst metaphor for inequality, there it is.”

The ghosts of Peterloo >> On the 200th anniversary of the massacre @tribunemagazine republishes EP Thompson's landmark essay exonerating the martyrs and incriminating the authorities - https://t.co/w9LDTQx02h #Peterloo2019 pic.twitter.com/uEoOl5teU7