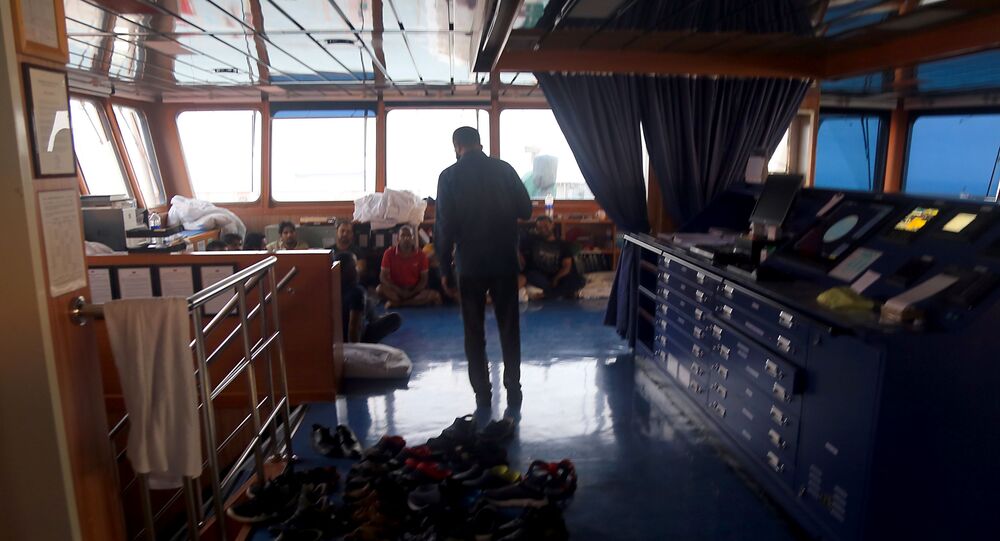 Footage released earlier showed what appears to be an Iranian flag waving over a deck of a British-flagged tanker seized by Iran’s Revolutionary Guard Corps in the Strait of Hormuz on 19 July.

The first photo has been taken inside the detained British-flagged oil tanker Stena Impero, where its several crew members are seen sitting on the floor.

The AFP news agency image also shows what looks like an Iranian official talking to the crew members as a pile of shoes is seen nearby.

The photo was released after a clip was filmed to show an Iranian flag hoisted over the main deck of the Stena Impero which was seized by Iran’s Revolutionary Guard Corps (IRGC) in the Strait of Hormuz on 19 July.

Separately, Fars reported that all 23 crew members of the detained tanker were now at the port of Bandar Abbas and will remain aboard the vessel until the end of Tehran’s investigation into the incident.

Tehran underscored that the duration of the detention of the mainly Indian crew will depend on their collaboration with Iranian authorities, who earlier said that the Stena Impero had been detained over alleged breach of international maritime regulations.

At the same time, Iran’s Parliament Speaker Ali Larijani made it plain that the tanker’s seizure was in retaliation against the detention of the Iranian oil supertanker Grace 1 in the Strait of Gibraltar by British military earlier this month.

Bob Sanguinetti, the head of the UK Chamber of Shipping, in turn accused the IRGC of clearly violating “international laws”.

On 4 July, the UK Royal Marines captured the Grace 1 which is suspected of delivering Iranian oil to Syria in violation of EU sanctions.

Tehran insisted that the vessel was not en route to the Arab country given that no port in Syria is capable of mooring the Iranian tanker. Foreign Minister Javad Zarif described the incident as “pure piracy” which he insisted “set a dangerous precedent”.