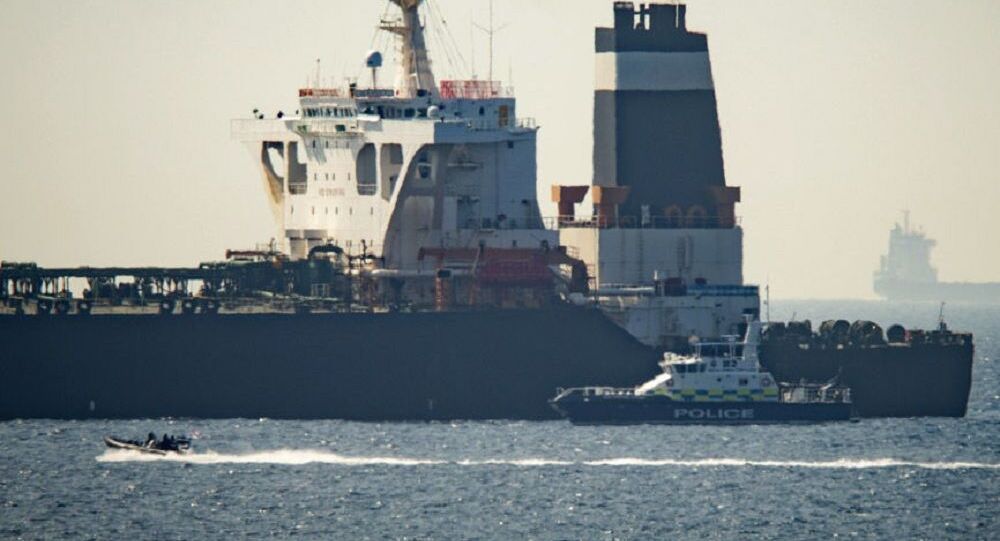 The Islamic republic, following the UK seizure of an Iranian tanker in the Gibraltar Strait, said that it will use all political and legal means to have the ship released, as Tehran affirms the boat was operating in accordance with the ongoing international sanctions regime.

The seizure of an Iranian tanker in the Gibraltar Strait by UK Royal Marines is "a form of piracy" proving that London is parroting "the hostile policies of the US" a senior Iranian Foreign Ministry official said Thursday, according to IRNA news agency report.

Speaking to the UK ambassador in Iran, the head of the Ministry’s Third Bureau on Western Europe condemned the move, calling it illegal and demanding the immediate release of the ship.

During the meeting, Iran handed the ambassador documents proving that the tanker was transiting to a permitted destination. The UK ambassador affirmed that he would relay Tehran’s protest in full to UK officials.

Earlier on Thursday, Spain’s acting foreign minister, Josep Borrell, reportedly declared that the tanker had been intercepted following a request from the United States. During the meeting in the Iranian Foreign Ministry, the UK ambassador stated that London does not comply with the unilateral sanctions dictated by Washington.

Port and law enforcement agencies of the UK overseas territory of Gibraltar, aided by the Royal Marines, seized the 300,000-ton tanker Thursday morning, claiming that the ship was transferring oil to Syria from Iran in violation of EU sanctions on Tehran.

"We have reason to believe that the Grace 1 was carrying its shipment of crude oil to the Baniyas Refinery in Syria," said Gibraltar Chief Minister Fabian Picardo, according to CNN. "That refinery is the property of an entity that is subject to European Union sanctions against Syria."

The United Kingdom's Ministry of Defence on Thursday welcomed the operation, calling it a “firm action by the Gibraltarian authorities, acting to enforce the EU Syria sanctions regime.”

“America & our allies will continue to prevent regimes in Tehran & Damascus from profiting off this illicit trade,” Bolton tweeted.

One Killed, 16 Injured in Fire on Tanker in Turkish Port of Aliaga (Video)