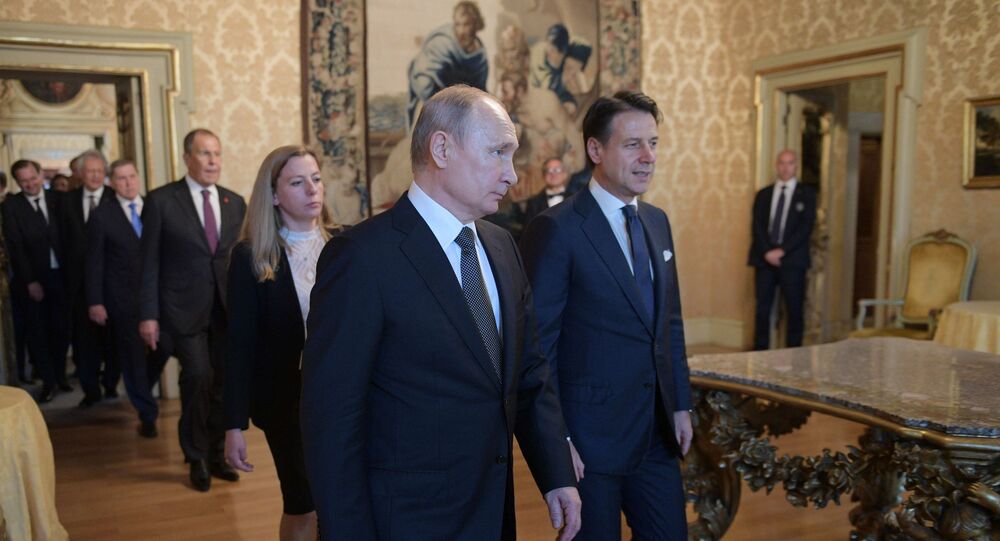 Putin on Chances of Restored Russia-EU Ties: 'It's Possible, But Not Everything Depends on Russia'

Earlier, before the start of his one day state visit to Italy, the Russian president said that the Russian side remained interested in restoring full-fledged relations with the European Union, and to work with all political forces supported by the EU's voters to do so.

Russian President Vladimir Putin has said that the opportunity for improving Russia-EU ties is always there, but that not everything depends on Russia.

"On our part we are ready to make our own steps toward Europe," Putin said, speaking at a press conference in Rome on Thursday along Italian Prime Minister Giuseppe Conte.

"Like I've said during my meeting with my Italian friends, you shouldn't always demand that Russia implement the Minsk agreements [on peace in Eastern Ukraine] in those areas where it's not up to us. For example, the Minsk agreements call for the restoration of economic ties between the Donbass and Ukraine. But it was [former Ukrainian President Petro] Poroshenko's decisions that prevented Donbass from restoring these relations...It's not up to Russia to restore what's broken in Ukraine. We cannot interfere with that, it's not up to us," Putin said.

Saying he was aware of Italian commitments to organisations including the EU and NATO, Putin said he hoped Italy would remain "consistent" in its position in favour of easing anti-Russian sanctions, and working in favour of the restoration of full-fledged relations between Russia and Europe.

Political and economic relations between the EU and Russia deteriorated sharply in early 2014 following a US and EU-backed coup in Kiev, which culiminated in a civil war breaking out in eastern Ukraine and in Crimean residents holding a referendum to break off from Ukraine and rejoin Russia. The Ukraine crisis resulted in several rounds of back-and-forth sanctions between Russia and Western countries and cost their economies tens of billions of dollars in economic losses.

For his part, Prime Minister Conte said Rome would continue working to create the conditions to lift economic sanctions. "Italy is working on creating conditions for overcoming this state of relations between Italy and Russia, the European Union and Russia. This state [of relations] is not beneficial for anyone," he said.

Asked to comment on the prospects of a political resolution to the crisis in Libya, Putin said he and Prime Minister Conte had agreed on the need for coordination, and said he was concerned over reports that terrorist militants from the Syrian province of Idlib were establishing a presence in Libya.

"We agreed to continue the coordination of efforts toward peaceful settlement in Libya, where, unfortunately, the situation is deteriorating, the terrorist threat is growing, and the number of victims is increasing. Both of us believe that it is important for the political and military forces in Libya to establish a ceasefire, to launch a dialogue, to take measures for restoring the political process aimed at overcoming the country's breakdown and to form unified and efficient state institutions," Putin said.

Saying that Russia could not be the sole guarantor in resolving the Libyan crisis, Putin said that that does not mean that Moscow refuses participating in the process.

Libya descended into chaos in 2011 following a NATO-led campaign of airstrikes in support of rebels seeking to topple the government of long-time Libyan leader Muammar Gaddafi. The turmoil prompted competing militias as well as terrorist groups such as Daesh (ISIS)* and al-Qaeda* to establish control over wide swathes of the country. The largest of the militias eventually formed two separate governments - the eastern Tobruk-based government supported by Field Marshal Khalifa Haftar and the Libyan National Army, and the western US and UN-backed Government of National Accord, based in Tripoli. The turmoil in Libya led to a sharp rise in the number of refugees attempting to make their way from Libya to Europe, with Italy taking the lion's share of these refugees in recent years.

© REUTERS / ISMAIL ZITOUNY
A destroyed and burnt tank, that belongs to the eastern forces led by Khalifa Haftar, is seen in Gharyan south of Tripoli Libya June 27, 2019.

Moscow, Vatican See Eye to Eye on Protection of Christians in Middle East

Commenting on his meeting with Pope Francis earlier Thursday, the Russian president said that among other things, the two men discussed the issue of the safety of Christians in the Middle East.

"We touched upon the topic of protecting the Christian population of the Middle East and humanitarian assistance in Syria. It is important that Russia and the Vatican have coinciding positions over protecting traditional values, promoting inter-religious and inter-civilizational dialogue," Putin said.