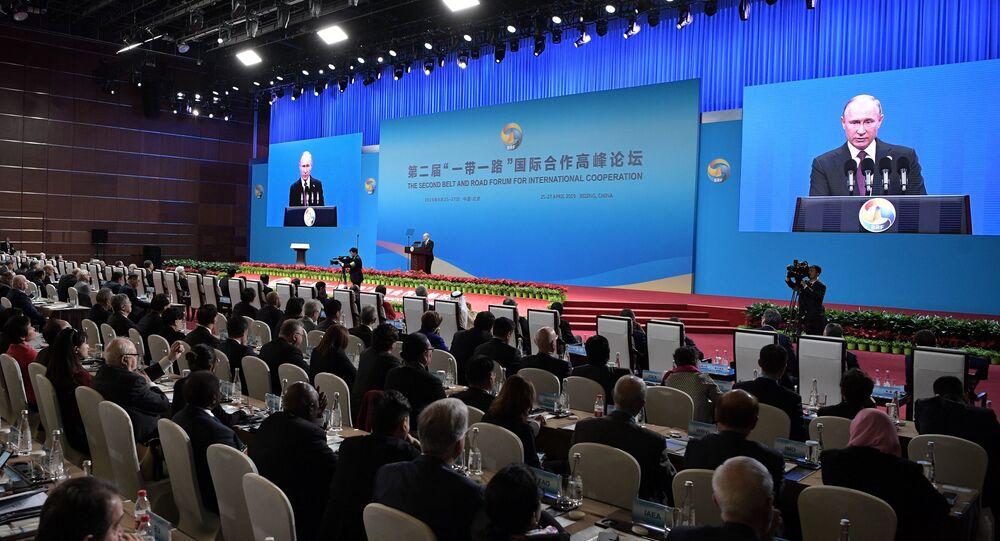 Putin: No One Wants Trade Wars, Restrictions Except Initiators of Such Measures

BEIJING (Sputnik) - No one in the world wants restrictions and trade wars, except those who initiate them, Russian President Vladimir Putin said on Saturday at a press conference following the Belt and Road summit in Beijing.

"No one wants any restrictions, no one wants any trade wars, expect those who initiate these processes, I believe. The overwhelming majority, almost 100 percent [of people] are sure that these restrictions and wars damage the global economy and its development", Putin said.

All the countries, with representatives of which Putin has met on the sidelines of the forum, want to cooperate with Russia, Putin added.

"We have very kind business relations with many of our partners, with the overwhelming majority of the world's countries, and we value this. All whom I have met want to work with us", Putin said.

While not naming any particular country, the Russian president apparently referred to the trade wars initiated by US President Donald Trump's administration to counter what Washington describes as "unfair" economic relations, provoking a trade imbalance. Particularly, a trade dispute between Beijing and Washington has been underway since last June when Trump announced that the US would impose import tarrifs on Chinese goods worth of $50 billion in a bid to fix the trade deficit between the two countries. Since then, China and the US ave exchanged several rounds of trade tariffs.

The US has also been locked in what appeared to be an escalating trade war with the EU after the Trump administration imposed tariffs on steel and aluminum imported from the bloc as well as from Canada and Mexico.

Russia Ready to Meet Oil Demands of China, Other Countries

"Russia is ready to meet the demands of China and many others global partners. We are the world's biggest [oil] producer. We produce 11.5 million barrels [of oil] per day, and we can produce even more", Putin said.

He added that Russia had an enormous potential in oil production.

"Not the potential matters, but the fact that we have agreements with OPEC that we will stick to a certain level of production", Putin explained.

The Belt and Road Initiative (BRI), a reference to the Silk Road Economic Belt, was launched by China back in 2013. The initiative says that its aim is to enhance "all-around connectivity through infrastructure construction", explore "new driving forces for world economic growth" and build "a new platform for world economic cooperation".

Russian President Vladimir Putin has continued on by saying that he informed the Beijing forum participants about the results of his landmark summit with North Korean leader Kim Jong-un in Russia's Vladivostok, as well as about the Russian vision on resolving the conflict in Ukraine.

"Today I met many colleagues from European countries. Of course, I informed them about our vision of the development of the situation in Ukraine, the further implementation of the Minsk agreements; [I also] informed my colleagues about the results of the meeting with the North Korean leader", Putin said, speaking at a press conference in the Chinese capital.

The meeting between the Russian and North Korean leaders was not only their first summit and Kim's first visit to Russia since coming to power in 2011 but also his first overseas trip since his re-election as the chairman of the State Affairs Commission earlier in April. Putin has said he is satisfied with how the meeting went, without revealing further details on the event.