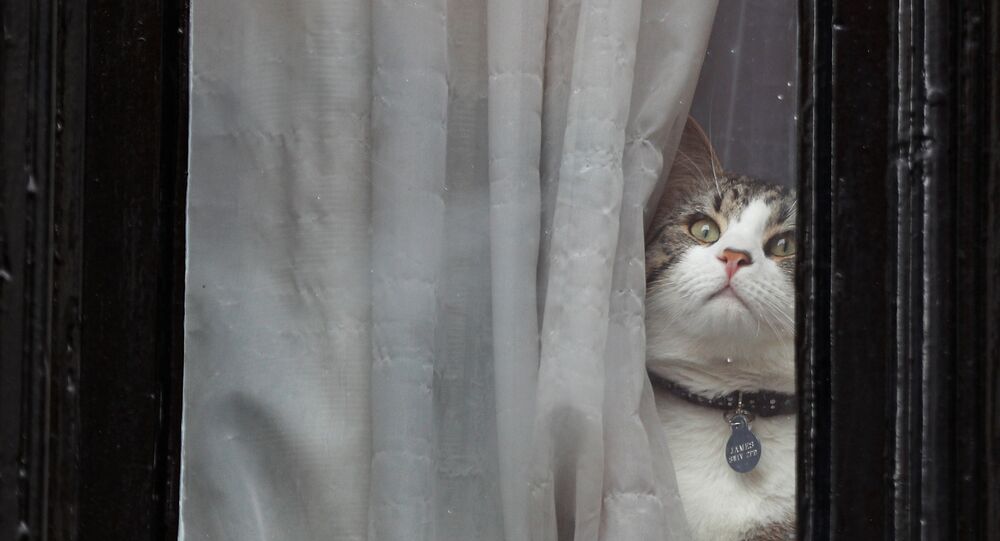 "It is not here since September, I think. It was taken by Mr Assange’s associates a long ago… It is not here. We are not a pet store, so we do not keep pets here", the spokesperson said.

The statement comes after the UK police arrested the founder of the whistleblowing website inside the Ecuadorian Embassy in London, where he had been residing since 2012 as political refugee, fearing extradition. The UK police confirmed that the arrest had been made "on behalf of the United States authorities". The arrest came after Ecuador withdrew the asylum it had earlier granted to Assange. Some Twitter users expressed concerns about the fate of the WikiLeaks founder’s pet after the arrest.

© AFP 2020 / DANIEL LEAL-OLIVAS
Assange Reportedly Gives Away Embassy Cat to Spare Him of 'Unbearable' Isolation
Assange gained fame after WikiLeaks published a large number of classified documents, including some that exposed abuses of power committed by the US forces in Afghanistan and Iraq, and at the Guantanamo Bay detention camp.

Since 2012, Assange had been residing in the Ecuadorian Embassy in London to avoid extradition to Sweden, where he faced a probe over allegations of sexual assault. Assange denied those allegations and called them politically motivated. While Swedish police dropped the investigation in 2017, Assange remained wary of being extradited to the United States.

In October, the Ecuadorian Embassy in the United States set a number of rules for Assange to stay in the mission, including, in particular, demands to feed and clean up after his cat, threatening to hand over the cat to embassy staffers or place it in an animal shelter otherwise.