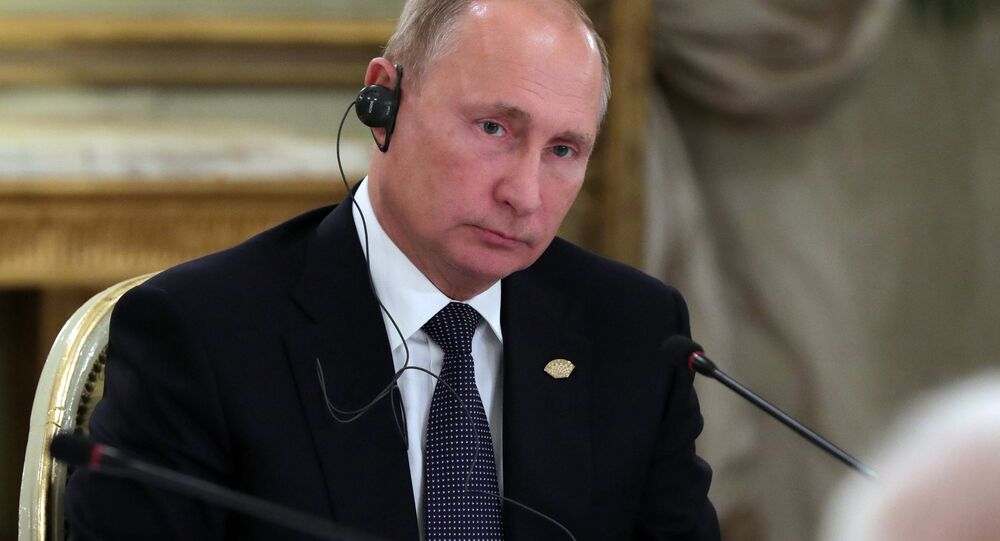 Russian President Vladimir Putin held a press conference on the sidelines of the G20 summit in Buenos Aires, Argentina.

The long-awaited talks between Putin and his US counterpart on the sidelines of the G20 summit were cancelled by Donald Trump over Russia's seizure of Ukrainian naval vessels that illegally crossed the Russian maritime border as they sailed toward the Kerch Strait, the entrance to the Sea of Azov. When commenting on the incident, Putin called it a provocation ahead of the Ukrainian presidential election.

During the press conference Putin said that he had an on-the-go meeting with Trump and answered his questions related to Kerch Strait incident briefly. He noted that Trump has own position on the incident — different from Russian one and added that he informed the US leader about Russian point of view.

© Sputnik / Vladimir Astapkovich
US Office Contacted Kremlin After Canceled Putin-Trump Meeting - Kremlin Aide
Putin also noted that he hopes that meeting with Trump to be held when American side is ready. He added that he regrets missing out on the full-fledged meeting with Trump which, he said, is long overdue. Putin said that  he sets no preconditions for potential meeting with Trump.

“It’s a pity we could not have a full-fledged meeting because I believe it is long overdue. I’m talking about issues of strategic stability in the light of the president’s announcement that he plans to pull the US from the INF treaty,” Putin told reporters.

Vladimir Putin also said that his US counterpart was unlikely to have cancelled their meeting, previously scheduled to take place on the sidelines of the G20 summit in Argentina, over any fears, calling Trump an experienced person.

"I don't think that president Trump has any fears, he is a very experienced person, an adult, so this is certainly not true," Putin said at a press conference held after the G20 summit, when asked about possible reasons behind the cancellation of the meeting.

"I hope that this meeting will be held eventually, when the US side is ready for it," Putin added.

Russian President also commented on the recent comments by the United Kingdom's government, saying that London compares Russia to a terrorist organisation to "score points" among UK voters.

“I think that when such comparisons are made and Russia is mixed up with terrorists, this behavior should rest on the conscience of those who make them… As for terrorism, Russia is probably the main contributor to the fight against terror. Such remarks usually aim to show toughness of a certain politician and to score points with the population of one’s own country,” Putin told reporters in Buenos Aires.

He noted that he hopes that Moscow and London will be able to set on the path of positive development of bilateral relations as soon as possible.

"The United Kingdom is an important partner for us. We hope that, one day, — based on the fact that this should happen as soon as possible, — we will be able to overcome the difficulties existing in our relations and ultimately reach a trend of positive cooperation in the interests of both the United Kingdom and the Russian Federation," Putin said.

© Sputnik / Alexey Malgavko
US Ukraine Rep Urges West to Slap More Sanctions on Russia Amid Kerch Strait Spat
Speaking on the topic of Kerch Strait incident, the President of Russian Federation said that Russia plans to present the evidence of Kiev's provocative actions in Black Sea down in form of legal documents.

Putin said the three Ukrainian naval ships seized in the Kerch Strait had it in their logs that they were on a mission to slip through Russian waters undetected.

“We have outlined our position and the very timeline of events. You can’t argue against it. How can you argue when it is written in the very ship logs that these ships were on a mission to slip into our territorial waters and through the Kerch Strait… It is a planned provocation. This is evident from the documents and sailors’ testimony. There’s nothing to argue about,” he told reporters on the G20 sidelines.

He added that the exchange of the detained in the incident Ukrainian sailors was not discussed, as Ukraine had not suggested it, and added that the investigation was under way.

“The issue about the swap has not been raised yet, including by the Ukrainian side. But it’s too early to discuss this while the probe is underway. We need to confirm the provocative nature of actions by the Ukrainian authorities and put it down in legal papers… We need complete confessions by sailors,” he said.

© AFP 2019 / Omar haj kadour
Russia, Turkey Agree to Continue Joint Work on Idlib Memorandum Implementation
Putin said that Russia and Turkey are concerned about the situation in the Syrian province of Idlib, hoping that the joint efforts of the defence ministries and special services of the two nations will result in solving the situation and creating a demilitarized zone in the area as soon as possible.

“We hope that our special services and the defense ministries will resolve this issue via joint efforts as soon as possible,” he added.

Russian President also said that he had agreed with Japanese Prime Minister Shinzo Abe during their meeting, which was held on the sidelines of the G20 summit in Argentina earlier in the day, that Abe would hold a visit to Russia in early 2019.

"I have agreed with the [Japanese] prime minister that he will hold a visit to Russia in the beginning of the next year. Perhaps, I will manage to hold a visit to Japan as well," Putin said at a press conference in Buenos Aires, following the G20 summit.

© Sputnik / Sergei Guneev
Russia, Japan Unlikely to Bridge Peace Treaty Gaps as G20 Starts - Scholars
The Russian leader also went into detail on the agenda of his talks with Abe.

"We have discussed the need to create additional cooperation mechanisms, the need to enhance both sides' trust level via developing humanitarian contacts and economic ties," Putin said.