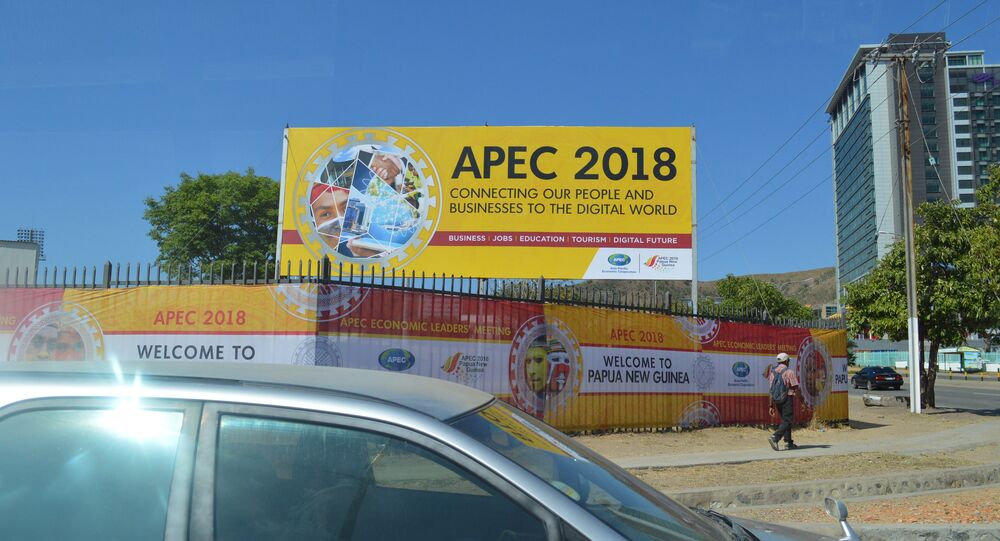 While the final preparations are underway for the 2018 APEC summit in Papua New Guinea, and leaders are arriving in the capital Port Moresby, guests and delegates already have a chance to enjoy the host country's rich culture.

No matter which APEC venues you visit in Port Moresby- the newly-built International Convention Center, or the Media Center in the city's indoor Aquatic complex — you'll see dozens of stalls, where local artists, souvenir factories and tour guides are promoting their products.

Buna Treks and Tours offers sightseeing, visits to coffee factory and photo ops in which visitors could spot crocodiles, cassowary and tree kangaroos. The company’s is showcasing its services before 800 journalists covering the APEC summit.https://t.co/jgpp8BjK0c

Besides travelling, a good way to experience local culture is through food. Nellie Varmari from Papua New Guinea's Central Province, who greets visitors at the Convention Center, built her own coffee business — Central Mamina Coffee, from scratch. The coffee beans used by the company are sourced from farmers at the Great Papuan Plateau, where they are grown at the altitudes of 1500 to 2000 meters.

Coffee is one of PNG's most popular products. Nellie Varmari, the owner of Central Dakis Mamina Trading, is showing me how coffee beans are being processed. pic.twitter.com/R4tpQBP7e8

Kimberley Tola is demonstrating handmade souvenirs by Kila Wani — from handbags made at Papua New Guinea's Manus Island where Australia recently had its immigration detention facility, to coconut shell earrings and seashell purses from the central and southern parts of the country.

All souvenirs that Kimberley is showing me are ready to be shipped abroad. She says that PNG has offices of major postal courier companies, so there is no problem to send them to any part of the world. pic.twitter.com/XPht7PLgRs

These and other entrepreneurs got support and loans from Papua New Guinea's government as part of the effort to help the nation's small and medium enterprises.

Small and medium enterprises (SMEs) account for over 97% of all business and employ more than half of the workforce across the bloc's economies.

Besides products and services, visitors and delegates of the APEC summit and ministerial meetings will also see the performance by local singers and dancers.

On November 16th, which was declared a holiday, as world leaders, including Russia's Prime Minister Dmitry Medvedev, will be arriving in Port Moresby, a cultural show will start at the local stadium.

Papua New Guinea is the host nation of this year's APEC events, the costs of which were covered in part by other bloc members, including China and Australia. The Pacific nation has a unique culture, with about 1000 tribes living on more than 600 inhabitable islands.T

The Asia-Pacific Economic cooperation is a bloc, which consists of 21 Pacific Rim economies. Russia joined the organization in 1989 and hosted the APEC summit in Far East city of Vladivostok in 2012.