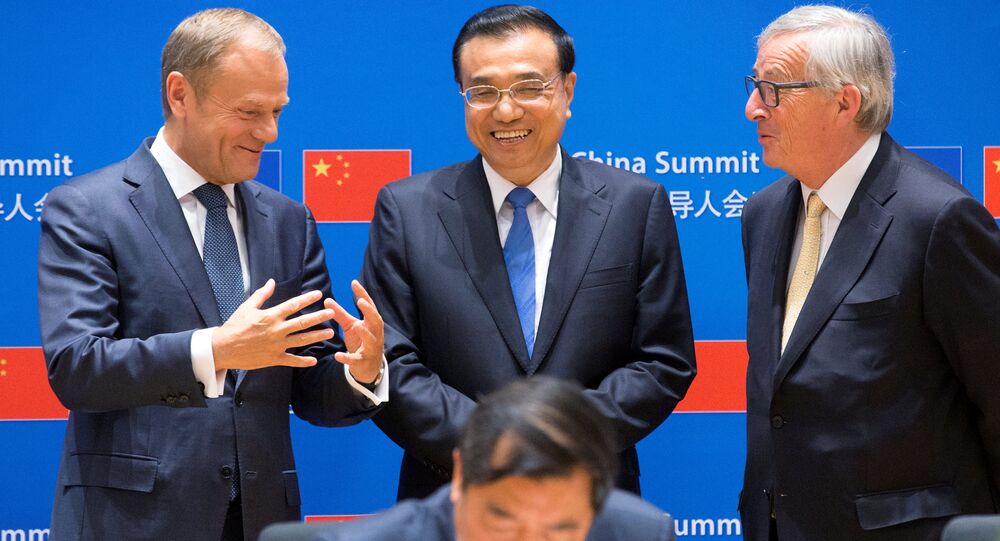 The nations of the world need to work together in the face of global problems, European Council President Donald Tusk stated during a visit to Beijing on Monday, just hours ahead of a summit in Helsinki between Russian President Vladimir Putin and his US counterpart Donald Trump, who earlier called the EU a “foe,” along with Russia and China.

Tusk said that it was incumbent upon China, the United States and Russia to avoid trade wars, Reuters reported.

"We are all aware of the fact that the architecture of the world is changing before our very eyes and it is our common responsibility to make it a change for the better," he said.

He also said that the World Trade Organization needs new rules on forced technology transfers and industry subsidies and urged the three countries to speed up the reform of the world trade body to prevent what he described as “conflict and chaos.”

© REUTERS / Fabrizio Bensch
Germany, China Team Up Amid Trade Row With US, Vow to Stick to WTO
The WTO has been criticized for years by politicians and businesspeople for its inability to ensure that its rules and international agreements are implemented.

Tusk and European Commission President Jean-Claude Juncker are in Beijing for talks with Chinese Premier Li Keqiang as part of an annual dialogue between the EU and China.

Speaking at a joint news conference in Beijing's Great Hall of the People, Jean-Claude Juncker said that China knows how to open up its economy and could do so if it wishes.

Brussels and Beijing will have to smooth over existing differences over China’s own restrictive market practices including the "dumping" of cheap Chinese imports, especially steel.

For his part, China’s premier said that Beijing seeks more balanced trade with the European Union.

Li Keqiang added that Beijing needs to advance investment treaty negotiations with the EU and that both sides should try to make sure that bilateral agreements are signed.

From China the two EU leaders will visit Japan.

Their current Asian tour comes as the EU is trying to forge alliances in the face of the Trump administration’s protectionist policies which Europeans fear may spark an all-out global trade war.

READ MORE: US WTO Exit Would Mean Trade War 'Like We Haven't Seen Since the 1930s' — PhD

Tusk and Juncker were speaking in Beijing just hours ahead of a US-Russia summit in Helsinki.

A meeting with Russia’s President Vladimir Putin will wrap up Donald Trump’s week-long trip to Europe during which he has criticized America’s NATO allies for not contributing enough to the alliance’s defense budget and threw into doubt Washington’s relations with the European Union, who he called “a foe” in terms of trade.

Germany, China Team Up Amid Trade Row With US, Vow to Stick to WTO