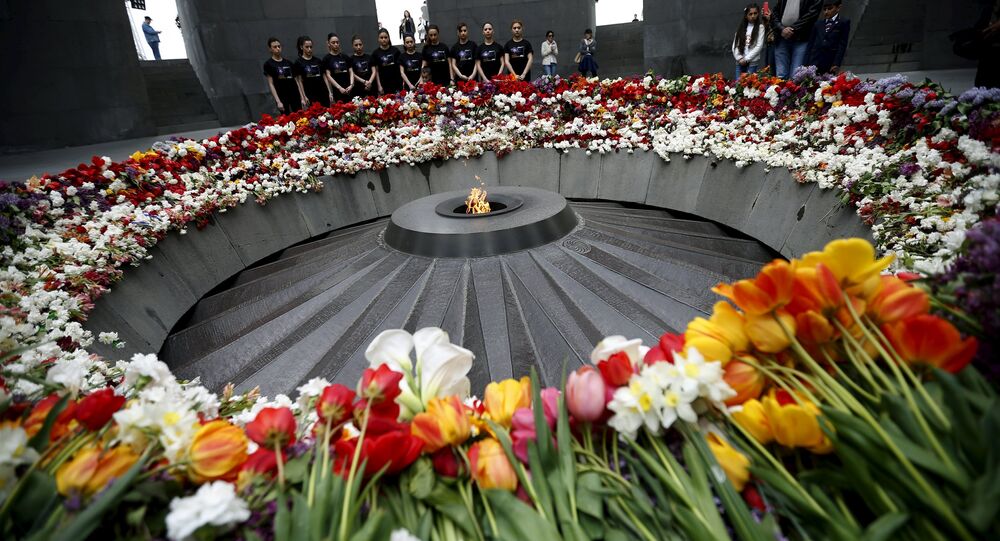 The Dutch parliament on Thursday voted to recognize the Armenian Genocide of 1915 in the Ottoman Empire.

The Dutch diplomat was called to the foreign ministry in Turkish capital, according to AFP.

Turkish Minister for EU Affairs Omer Celik on Friday condemned the Dutch parliament's vote on a motion on the recognition of the Armenian genocide.

"We condemn the decision taken by [the Dutch parliament], and it is null and void for Turkey. What we seek is for the Netherlands, which is strongly responsible for a genocide like Srebrenica, and has taken the wrong steps, to be more careful in these matters. Hence the decision has no validity for Turkey," Celik was quoted as saying by the Yeni Safak newspaper.

Ankara has strongly condemned a resolution passed by the lower house of the Dutch legislature recognizing the Armenian Genocide in the Ottoman state, according to a Turkish Foreign Ministry statement.

© Sputnik / Vladimir Fedorenko
Ankara Summons Dutch Diplomat Over Parl't Plans to Recognize Armenian Genocide
It is noted that Turkey's position on the events of 1915 is based on "historical facts and legal norms." "The decision of the European Court of Human Rights proves that we're right on this issue," the document says.

In the late XIX-early XX centuries, the Ottoman Empire carried out regular persecutions of Armenians. In particular, in 1915, up to 1.5 million Armenians were killed. This genocide was recognized by many states, including Germany, as well as the European Parliament. The Russian State Duma adopted a resolution in 1995 "On the condemnation of the Armenian Genocide of 1915-1922 at its historical homeland — Western Armenia." Turkey traditionally rejects accusations that there was a genocide of Armenians, claiming that the victims of the tragedy of 1915 included both Armenians and Turks.

The Armenian Genocide remains a stumbling block between Turkey and the EU.