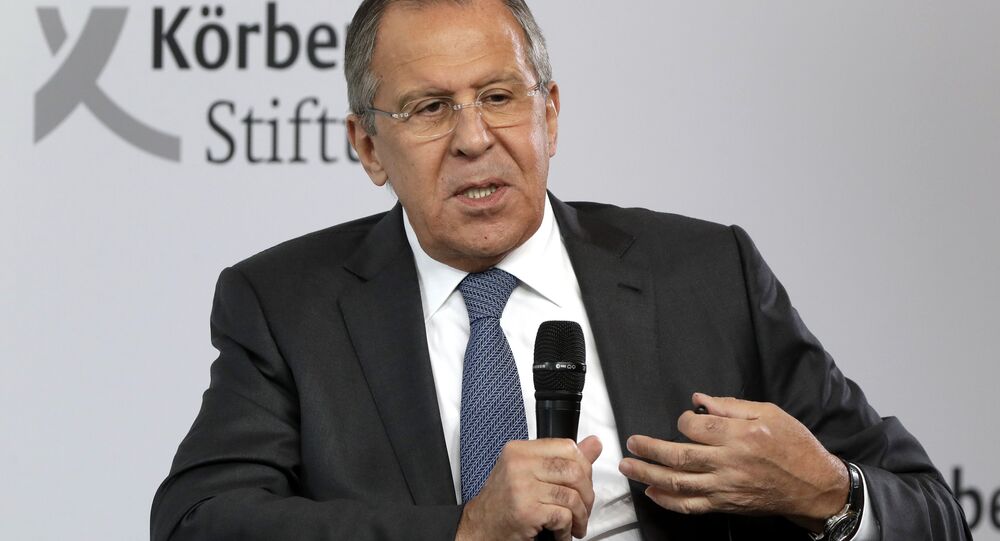 The Russian Foreign Minister has delivered a speech at the annual Munich Security Conference, touching upon the issues of Moscow's relations with the United States and the European Union as well as Middle East security problems.

Commenting on the Moscow-Brussels ties, Lavrov said that the European Union has failed to find a golden mean in relations with Russia in the last decades, treating the country in the 1990s as an "apprentice" that should be taught in accordance with Western standards and values. Now, the other irrational myth about the so-called "Russian threat" is being exploited, Lavrov went on to note, with the Western states accusing Moscow of meddling in every controversial event, including Brexit and the Catalan referendum on independence.

© AFP 2021 / JUSTIN TALLIS
The 'Russian Threat' and the Politics of Mass Distraction
He stressed that both stereotypes are wrong and reveal a lack of sense and understanding of Russia within the EU.

"We noticed that the number of people who feel uncomfortable about the abnormal situation in our relations is growing in the EU," Lavrov stressed. He noted that the 27-member bloc is experiencing "diplomatic paralysis" as it is split over the attitude toward Russia.

The Russian Foreign Minister has called on Brussels to start working together to upgrade the international relations systems, speaking at the Munich Security Conference on Saturday.

"Russia is open to an equal, mutually respectful partnership that will be based on the balance of interests with the EU in order to find effective solutions to the challenges of the present day. We are ready to build relations with the US and other countries basing on the same principles," Lavrov said.

The Foreign Minister also said that Moscow hasn't changed its approach towards Brussels and wishes that the EU remains unified and serves the basic interests of its member-states.

"[The EU countries] should define how to develop their own economies and their external economic ties, for example, how to ensure that their needs in energy are being met out of their own decisions or influenced by others. I hope that they would be responsible and, I would like to highlight it, autonomous in international affairs," he said.

Int'l Cooperation on the Middle East

Moscow believes Russia, the US, and the EU, as well as China, should cooperate on the creation of a new security architecture in the Middle East, the Foreign Minister pointed out.

"We believe that this idea of cooperation between the European Union, Russia, the United States and China to support the creation of the security architecture in the Middle East is very appreciated, and the same is true for the Gulf," Lavrov said.

He also warned the international community against exacerbating tensions between Shias and Sunnis — adherents of Islam's two major branches, —  while trying to resolve the brewing conflicts in the Middle East. Lavrov added that Russia calls for seeking a solution to the crises through a diplomatic process similar to the 1974 Helsinki process.

The Middle East region has been engulfed by instability for years, with the 2011 protests in a number of states in the region known as the Arab Spring leading to coups and armed conflicts.