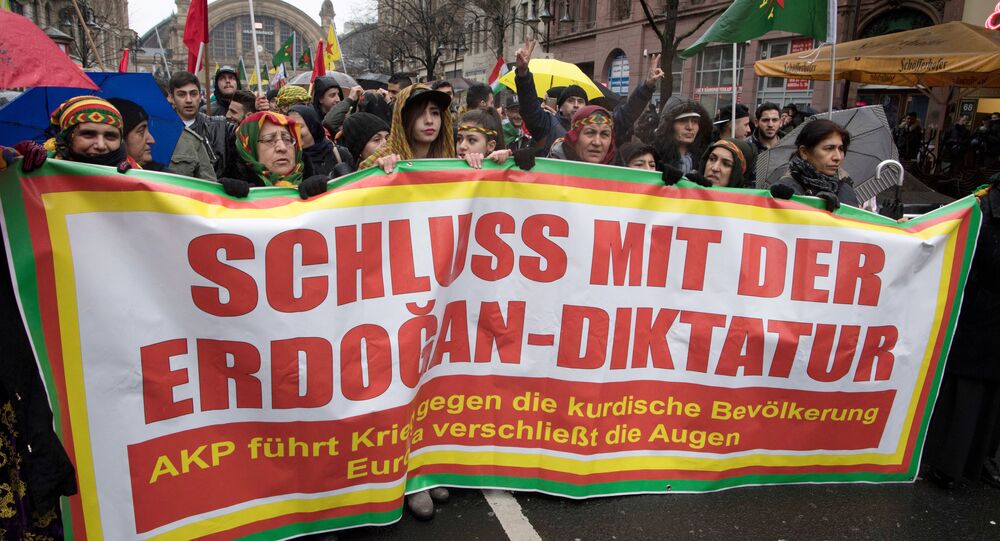 Hundreds of Kurds and their supporters took to the streets of several European cities on Saturday to protest the Turkish military operation in the Kurdish enclave of Afrin in northern Syria.

A group of protesters gathered Saturday in front of the Turkish Embassy in Rome to protests against the Turkish military operation against Kurdish forces in the enclave of Afrin in northern Syria.

The operation codenamed "Olive Branch" was officially launched on Saturday with airstrikes on Kurdish targets. On Sunday, media reported that the ground phase of the operation in Afrin has started.

Ankara has said the offensive was not against "Turkmen, Kurdish or Arab brothers" living in Afrin, but against the "terrorist groups" there.

​​Similar rallies were held in Germany on Saturday.

In Frankfurt, a group of some 400 Kurdish protesters marched through the city center.

Hundreds of Kurds also demonstrated in Berlin to protest against the Turkish military operation Afrin.

​On Saturday, hundreds of protesters also took to the streets of Paris. They marched towards the Place de la République. The protesters were holding anti-Erdogan and pro-Kurdish banners, calling for a halt to the military operation.

Dozens of Kurds took the streets of Copenhagen on Saturday, demanding a stop to operation Olive Branch.

Before the military operation kicked off, pro-Kurdish protests were also held in Britain. On Friday, around 150 people gathered in front of the Turkish Embassy in London to denounce Ankara’s plan to bomb Afrin.

© REUTERS / Osman Orsal
Erdogan Says Operation in Syria's Afrin De-Facto Started On The Ground
Turkey has been threatening an operation in Afrin since last week after the United States announced it was going to start training a border security force composed of the Syrian Democratic Forces (SDF), affiliated with the Kurdish People's Protection Units (YPG), which Ankara labels a terrorist group. Turkey is claiming self-defense under international law. According to a statement by the Turkish military, operation Olive Branch is aimed at eliminating YPG militants and Daesh terrorists in Afrin.

The military operation has already been condemned by Damascus and the Syrian Foreign Ministry claimed that it was a violation of Syrian sovereignty.

The Russian Foreign Ministry stated on Saturday that Moscow was closely following the situation in Afrin and was concerned by the news about the Turkish military engagement in the region.