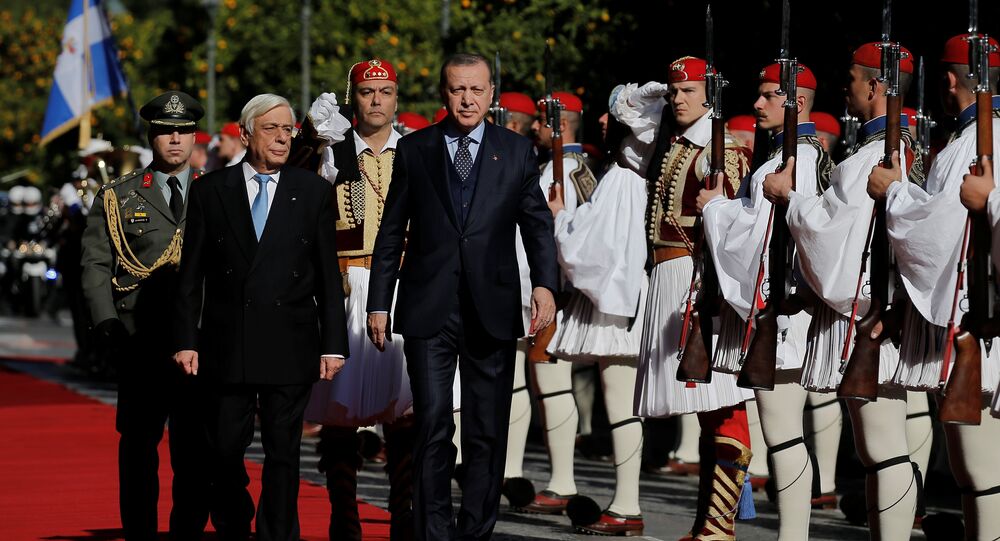 The 1923 Treaty of Lausanne, the post-WWI document defining the borders of modern-day Turkey, including its western borders with neighboring Greece, has been called into question by the Turkish president.

Less than a day before setting off for his historic two-day visit to Greece, Erdogan told Greek journalists that the treaty is in need of an update.

"In fact, all agreements pacts in the world should be updated over time," Erdogan said, speaking with Greece's Skai TV and the Kathimerini newspaper. "Lausanne too, in the face of all these developments, is in need of an update. This update would be beneficial not only for Turkey but also for Greece," he added.

Erdogan did not expand on what sorts of changes he had in mind, but called the distances between some of the islands in the Aegean Sea, over which Turkey and Greece have competing claims, "problematic." He added that issues concerning territorial waters, airspace and the continental shelf could be "easily" resolved.

© CC0
Map of post-WWI Turkey's borders as defined under the 1923 Treaty of Lausanne
© REUTERS / Eurokinissi/Panagiota Tsikaki
Tsipras: Greece to Uphold Court Decision on Extradition of Turkish Servicemen
The Turkish leader's remarks were met with confusion and concern in Greece, where the Lausanne Treaty is seen as the foundational document in peaceful bilateral relations between the two countries. Greek government spokesman Dimitris Tzanakopoulos said that the Turkish president's comments raised "serious concerns and questions."

"Comments regarding [the treaty's] revision do not contribute to the climate we are trying to build in our relations and in the region," he added.

Wednesday's remarks were not the first time that Erdogan has raised the issue of the Lausanne Treaty's possible revision. In 2016, he complained that the Treaty saw Ankara "give away" Turkish islands in the Aegean. "They were ours. There are our mosques, our shrines there," he said, adding that Turkey's territorial disputes with its neighbor in the present are a consequence of the treaty.

© AP Photo / Zoltan Mathe/MTI
Cyprus FM Tells Sputnik About Island Reunification Talks Prospects
Erdogan's much-anticipated two-day trip to Greece on Thursday and Friday will be the first visit to the country by a Turkish head of state in 65 years. The two nations, both members of the NATO alliance, have a long history of conflict, and came to the brink of war in 1974, 1987 and 1996 over disputes about Cyprus, and islets and mineral rights in the Aegean. The two countries also regularly engage in mock aerial warfare, sometimes resulting in real casualties, over competing airspace claims. Erdogan is expected to discuss the Aegean territorial dispute issue during talks with Greek Prime Minister Alexis Tsipras.

Observers also expect Erdogan to bring up the eight Turkish army officers who fled to Greece following the failed July 15, 2016 Turkish coup attempt currently being harbored in the country. Athens has ignored Ankara's extradition requests out of fear that the servicemen may not receive a fair trial in their home country. In Wednesday's interview with Greek media, Erdogan said that Prime Minister Tsipras had promised him a speedy extradition of the officers in the days following the coup attempt, but later reneged.