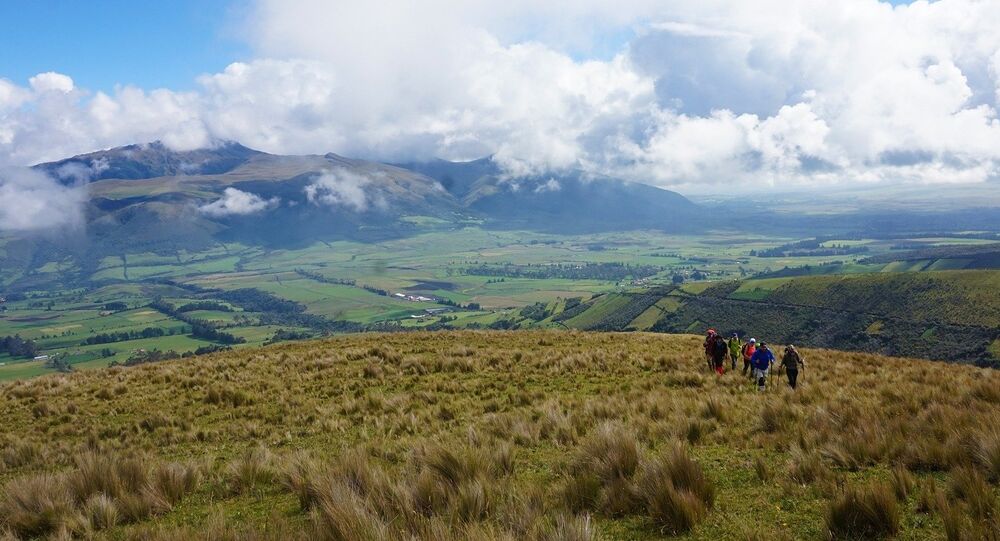 Sputnik has spoken with the Ecuadorian minister of the environment on the climate change issue.

"The Paris Agreement comes into full force in 2020, and we are really worried that commitments of some developed countries are not fulfilled in this period from now to 2020. Some developed countries are 'washing their hands' on the issue of not having any commitments at all from now to 2020, so this is something that should be addressed," Ecuadorian Minister of the Environment Tarsicio Granizo told Sputnik on the sidelines of the ongoing UN Climate Change Conference (COP23) in the German city of Bonn.

© AP Photo / Branden Camp
Over 1 Min Americans Challenge Trump by Signing Petitioning Backing Paris Climate Deal
According to the minister, Ecuador has two agendas at COP23: one as a country and another related to its G77 plus China group's presidency.

"As a country, we would like to support the indigenous platform and defend principals of the Paris Agreement, particularly, related to shared responsibilities for climate change. As the president of G77 we would like to push for a common ground at negotiations among developing countries related to financing and many other pressing issues," the minister said.

The clean energy investment in developing countries in 2016 stood at $11.8 billion, a decrease of $5.5 billion from 2015, according to the Climatescope research from Bloomberg New Energy Finance. While the European Union invested the largest share into emerging markets clean energy projects accounting for over 40 percent of the funds in 2010-2016, some countries contributed a significantly smaller share. For example, the United States accounted for 10 percent of international investments into renewables in emerging markets in 2016.

According to the official, one of the objectives of Ecuador at the COP23 UN Climate Change Conference is to share its positive experience in fighting deforestation under the international program Reducing Emissions from Deforestation and Forest Degradation (REDD+).

"Ecuador is leading several efforts related to the REDD+ Action Plan. We are sharing our positive experience here at COP23 and other forums in order to show that it is possible to fight climate change through fighting deforestation," Granizo said.

The minister added that Ecuador launched a national project called Forest Partnership, which is an agreement between the owners of the land and the government, which gives out compensation to said landowners for preserving the forest.

© CC0
COP23 Global Climate Action Days Closed by Bestowing UN Climate Solution Award
Granizo underlined that the REDD+ Action Plan was linked to the country's sustainable development model, the goals of which include poverty reduction, the transformation of energy and production matrices, reforestation, and conservation of biodiversity.

The REDD+ program that is aiming to mitigate climate change by reducing net emissions of greenhouse gases through enhanced forest management in developing countries was first discussed under the United Nations Framework Convention on Climate Change (UNFCCC) in 2005.

On Official Representation of Indigenous Peoples

Ecuador is urging for the global indigenous community to be officially represented at the Paris climate talks as they have the potential to help the global community combat climate change.

"The indigenous peoples' platform for us is very important. We view them as an ally in our fight against climate change. They never had an official representation as a part of the Paris Agreement," Granizo said.

© REUTERS / Alister Doyle
Singing Protesters Interrupt US Delegation at Climate Summit Event in Bonn (PHOTO, VIDEO)
He went on to say that in Latin America and, in particular, the Amazon basin, 60 percent of the land was in hands of indigenous communities. Through their resource management, the environment minister said these peoples could give the global community the help it needs in tackling climate change.

According to the minister, Ecuador has significantly advanced in its dialogue with indigenous peoples on the national level.

On November 6-17, COP23 is being held in Germany’s Bonn. Participants of the event are discussing various aspects of the Paris Agreement's implementation, namely how to finance climate action, enable countries to cooperate, adapt and build resilience, report progress, and create an enabling environment for sustainable development.