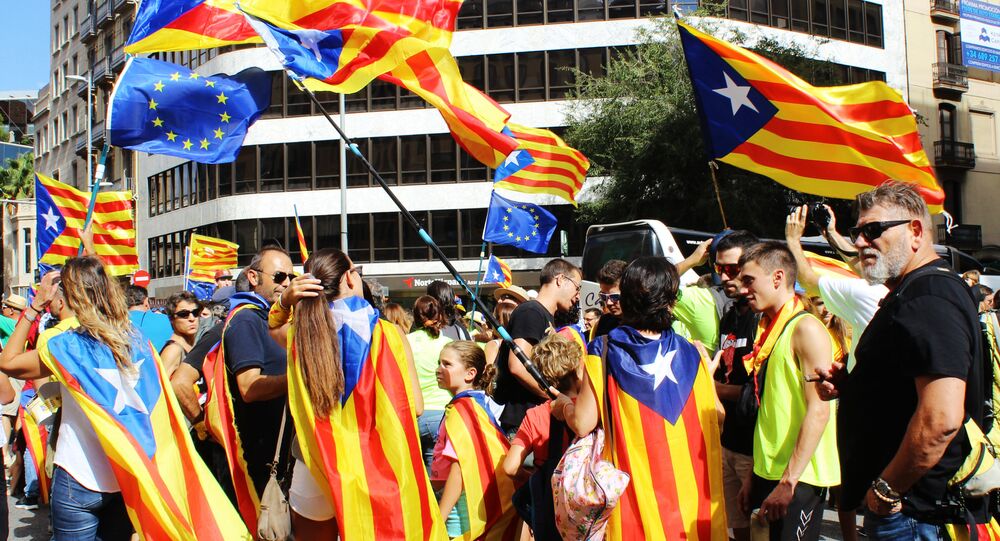 Moscow has been repeatedly accused of meddling in other countries' internal affairs, but these allegations have never been proven true. However, the international community still finds it convenient to blame their troubles on Russia.

MADRID (Sputnik) — Russian Ambassador to Spain Yuri Korchagin on Tuesday, in an interview with Sputnik, refuted media allegations of the Kremlin's involvement in the situation around the upcoming referendum on Catalonia's independence, deemed illegal by Madrid.

Spanish newspaper El Pais has recently published an article, accusing Moscow of trying to influence the Catalan crisis using Russian state media in order to destabilize Europe. According to El Pais, several media outlets "with ties to the Kremlin," such as RT broadcaster and Sputnik news agency are lacking objectivity in their coverage of the referendum situation in Spain's autonomous region of Catalonia.

"Our official position is known, it has been voiced more than once: [the referendum] is an internal process of Spain. We proceed based on the fact that all issues that arise during these internal processes should be solved within the framework of the Spanish laws and the Spanish constitution. Russia is in no way connected to these processes and has no interest in being connected to them," the ambassador said.

Korchagin said that the El Pais article mixed together several topics and accused Russia of orchestrating several undercover campaigns to influence politics in other countries.

© Sputnik / Evgenya Novozhenina
US Move to Silence Sputnik, RT to Face Alternative Media Backlash - Media Representatives
According to the ambassador, Spanish society has been through several complicated periods, which allowed it to "develop immunity against various politicized and ideology-driven insinuations."

Korchagin said that the Russian Embassy sent an open letter to El Pais, which was published by the online version of the newspaper, and also explained its point of view via social networks.

"The feedback we are receiving shows that the Spaniards have this 'immunity;' the readers do not, at all, accept the point of view that suggests blaming everything that happens in the world on 'the hand of Moscow.' The Russian-Spanish relations have been and will remain — we will do everything possible to ensure that — brilliant, friendly and mutually beneficial," Korchagin said.

The Spanish Constitutional Court has suspended the bill on the referendum passed by the Catalan Parliament, thus making all further preparations for the vote illegal. However, the supporters of the referendum, scheduled for October 1, intend for it to take place.

© Sputnik / Evgenya Novozhenina
Why Accusations Against Sputnik, RT an 'Insult to the Americans' Intelligence'
Russia has faced many accusations of interfering in other states' affairs since the United States officials and media alleged following the US presidential election in 2016 that Moscow had influenced the vote. Several European officials have expressed concern over Russia's alleged potential meddling in their countries' domestic affairs.

Russian officials pointed out that the allegations have not been substantiated and stressed that Moscow has never interfered in other countries' affairs and did not intend to do so.

RT and Sputnik have been repeatedly accused of publishing fake news or skewed coverage by Western authorities. In November 2016, the European Parliament voted in favor of a resolution to counter Russia-based media outlets, such as RT and Sputnik, claiming they posed a threat to Europe's unity. Russian President Vladimir Putin, commenting on the adoption of the resolution, stressed that it indicated an apparent degradation of the concept of democracy in the West.