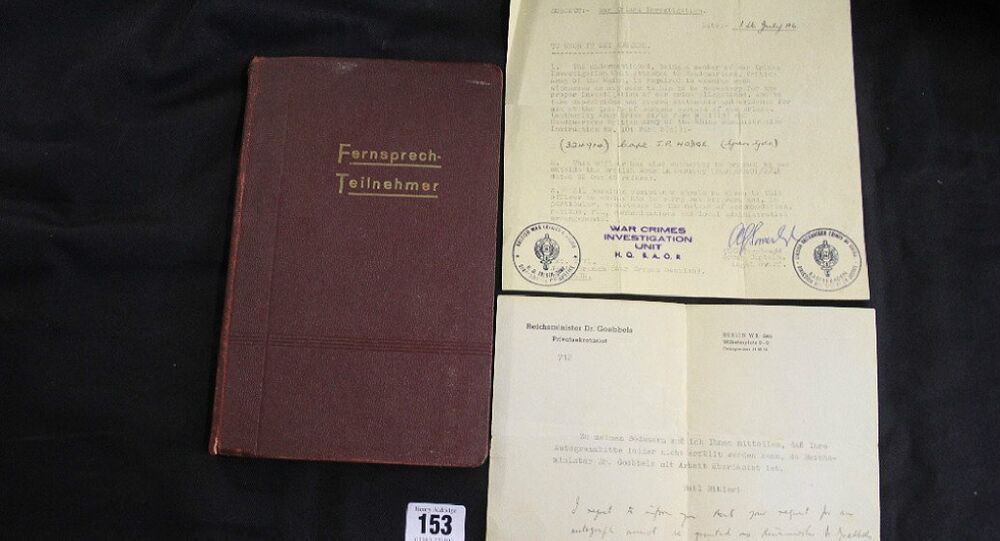 A phone directory, which allegedly belonged to Adolf Hitler and which contains the names, addresses and phone numbers of some of the key Nazi figures, such as Heinrich Himmler, Joseph Goebbels, Hermann Goering, among others, has been auctioned off in the UK for £33,000 ($44,500), twice its initial estimate.

Additionally, the directory contains the numbers of Hitler's personal architect Albert Speer and photographer Heinrich Hoffmann, who had acquainted the head of the Third Reich with his future wife Eva Braun.

Hitler diaries, Hitler phone directory. What next, the Hitler cook book?? Who on earth would want to buy such macabre "momentos"? https://t.co/Ip11VfFLGU

​The address book was found in Hitler's Reich Chancellery at the end of the Second World War, in 1945, by a British war crimes investigator, Captain John Hodge, who was a British Grenadier Guards officer.

Judging by the fact that the directory contains the details of almost every high-ranking official except Hitler himself, the auctioneers made an assumption that it, in fact, belonged to the Fuhrer.

​'You pick a bad guy and he is in there. The only person of note who is missing is Adolf Hitler," auctioneer Andrew Aldridge told the British newspaper.

"We don’t know for certain who it belonged to but it was clearly the property of a very senior Nazi, possibly Goebbels’s secretary," he suggested.

The phone book of the Nazi murderer Hitler was sold in the UK at $ 44,000 pic.twitter.com/ACtK7zel0o