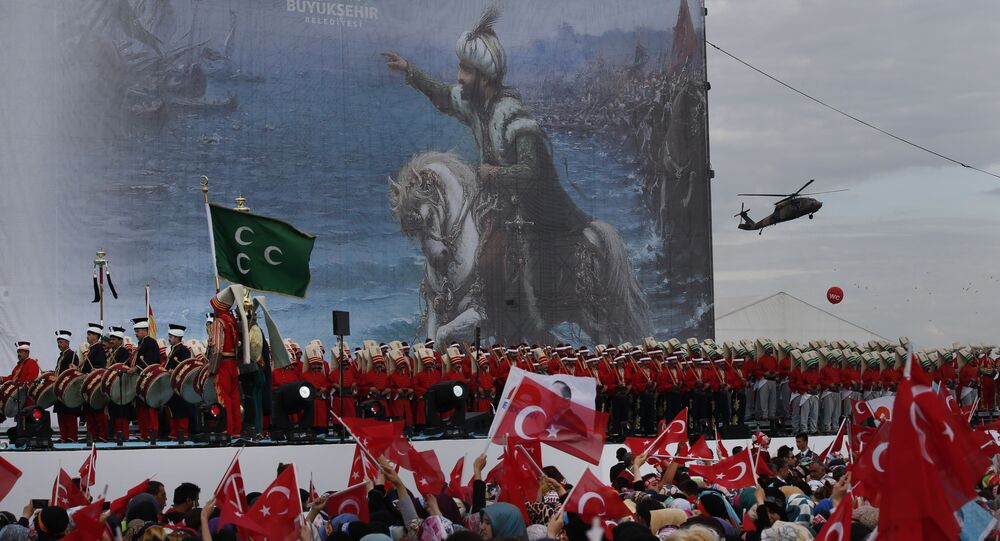 The activists were detained by the Turkish police over allegedly aiding a terrorist group on July 5.

German Foreign Minister Sigmar Gabriel said that Berlin will reconsider its economic policy towards Ankara as well as its credit, investment and tourism programs over the arrests of human rights activists in Turkey.

Relations Between Germany and Turkey Spiral into Crisis https://t.co/qDS58JclNa

Turkish authorities have already detained thousands of journalists, diplomats, judges, members of the military and human rights activists after the failed coup attempt of July 15, 2016 over their alleged support for exiled Islamic preacher Fethullah Gulen, accused by Ankara of being behind the coup.

A serious crisis of confidence is taking place in our relations with Germany, Turkey's MFA sayshttps://t.co/mqtrcdKW9v| pic.twitter.com/h4KwED7O6t

In an interview with Sputnik Turkey, Retired Rear Admiral of the Turkish Armed Forces Soner Polat berated Germany for intentionally fueling a crisis in bilateral relations which he said is an important factor in the process of Turkey's separation from NATO.

"Turkey is moving slowly but confidently towards Eurasia even though it is a painful process. It would be naive to think that Turkey, which has been a NATO member since 1952, can easily and painlessly distance itself from the alliance. The statements made by Germany will by all means affect Turkey's position within NATO," Polat said.

© AFP 2019 / BENOIT DOPPAGNE / BELGA
Germany Not Interested in Post-Referendum Turkey's Expulsion From NATO - Foreign Ministry
He added that "right now, there is a cautious and negative attitude towards Turkey in the West" and that "the growth of this trend was even more apparent after the failed coup attempt in Turkey on July 15 last year."

According to him, "prejudice and hostility against Turkey are in place in the territories from Australia to New Zealand, from Europe to the United States, something that is disguised as opposition to the Justice and Development Party, as well as to Turkish President Recep Tayyip Erdogan."

"The main goal is Turkey itself, and Erdogan is described as a person who bears responsibility for everything. Germany consciously decided to aggravate this crisis by deliberately provoking tension in Injirlik. After all, what would have changed if German MPs visited the Injirlik or Konya air base? Everything indicates that these crises were artificially provoked," Polat said.

He noted that the opposition to Erdogan became the key point of Europe's internal policy.

"The Netherlands and Germany currently follow the example of British Foreign Secretary Boris Johnson who conducted his Brexit campaign in line with confrontation with Turkey. Preventing Erdogan from delivering a speech at the G20 summit is a big scandal. Turkey is drifting away from the West," Polat pointed out.

He described Germany as "a Eurasian country" which he said "should take more rational steps and act in a more balanced way [with respect to Turkey]".

Polat also recalled that "if Berlin and Ankara break off relations, Germany, which has a trade surplus with Turkey, will suffer more damage."

"German authorities make statements that imply, in fact, interference in Turkey's judicial system. Everyone should understand that Turkey is not Greece, Iraq or Syria. And if they do not understand now, sooner or later they will," he concluded.

© AP Photo / Emrah Gurel
Jordan 'Can't Become Alternative' to Turkey's Incirlik Base for Germany
In late May, Turkish Foreign Minister Mevlut Cavusoglu said that Ankara will not allow German lawmakers to visit the Incirlik air base as long as Germany takes steps against Turkey.

"Germany negatively looks at Turkey, and now they say: 'We want to come to Incirlik'. Germany must understand that Turkey, which it can force to do what it wants, and to get what it wants from it, exists no longer. This remains in the past. In such conditions it is impossible to allow German parliamentarians to visit Incirlik," Cavusoglu said.