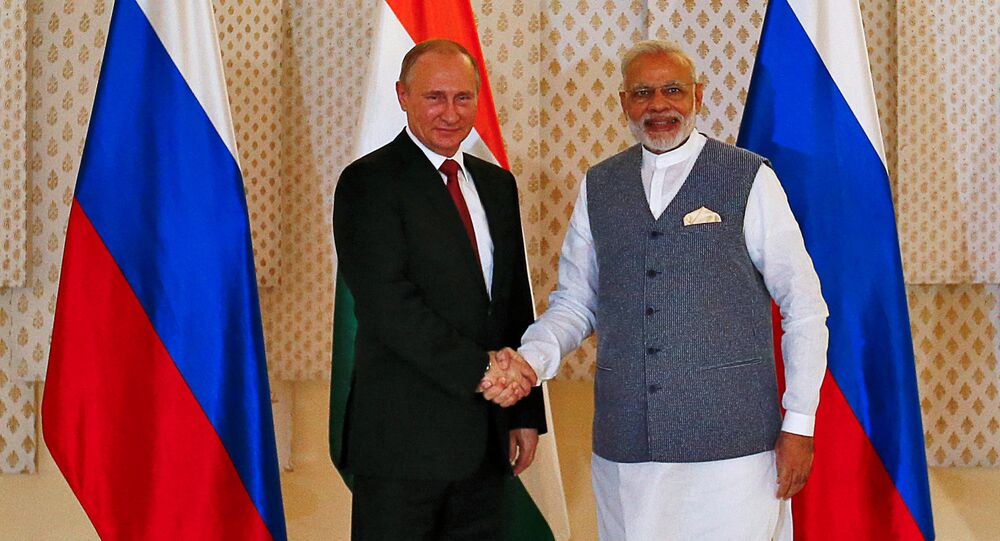 As part of celebrations to mark the 70 years of establishment of diplomatic ties between India and Russia, a friendship rally spanning more than 20,000 km covering four countries will be organized in September.

© Sputnik / Grigoriy Sisoev
Russia, India Aim to Sign S-400 Missile Systems Contract in 2017
New Delhi (Sputnik) – The India-Russia friendship rally is being backed by the Embassy of the Russian Federation as well as the Government of India. The rally will be flagged off from New Delhi in September and traverse via Iran, Azerbaijan and Russia. It will have 80 participants from all the four countries.

The land and sea route of the motor rally is also expected to bring global attention to the International North-South Transport Corridor (INSTC), which will create a smooth passage for ship, rail and road traffic for the movement of freight between India, Russia, Iran and for the wider Eurasian region. The motive is to enhance trade connectivity between major cities such as Mumbai, Moscow, Tehran, Baku, Bandar Abbas, Astrakhan, Bandar Anzali, to Europe.

The rally is part of theefforts to speed up the INSTC as decided during the St. Petersberg Summit meeting between Indian PM Narendra Modi and Russian President Vladimir Putin.

"The event will trail the International North-South Transport Corridor between India and Russia and will significantly revive trade opportunities," PTI quoted Praveen Chandra Bhanjdeo, the founder of the Kalinga Motor Sports, the organizers of the rally, as saying.

The motor rally got delayed in the wake of the Tehran attacks last month as it was originally planned to be flagged off by Indian Prime Minister Narendra Modi on August 15, the day India celebrates its Independence Day.

The first phase of the rally will travel till Kandla by road and from there the vehicles will be shipped to Bandar Abbas, Iran by sea. The second leg will see participants driving till Moscow covering a distance of over 6,000 km. In the last phase, the participants will return to Kandla port via a shorter route and cover a distance of over 8,000 km before ending in New Delhi.

Indian experts say the motor rally could further boost the trade and business prospects of the INSTC.

"The INSTC is crucial from both Indian and Russian point of view as well as for the economic prospects of the wider Eurasian region. While at present it is not on the scale of China's Belt and Road Initiative where Russia is closely involved, the INSTC in itself holds immense promise and can propel India-Russia economic ties," Dr Jagannath Panda, at the New Delhi-based Institute for Defence Studies and Analyses, told Sputnik.