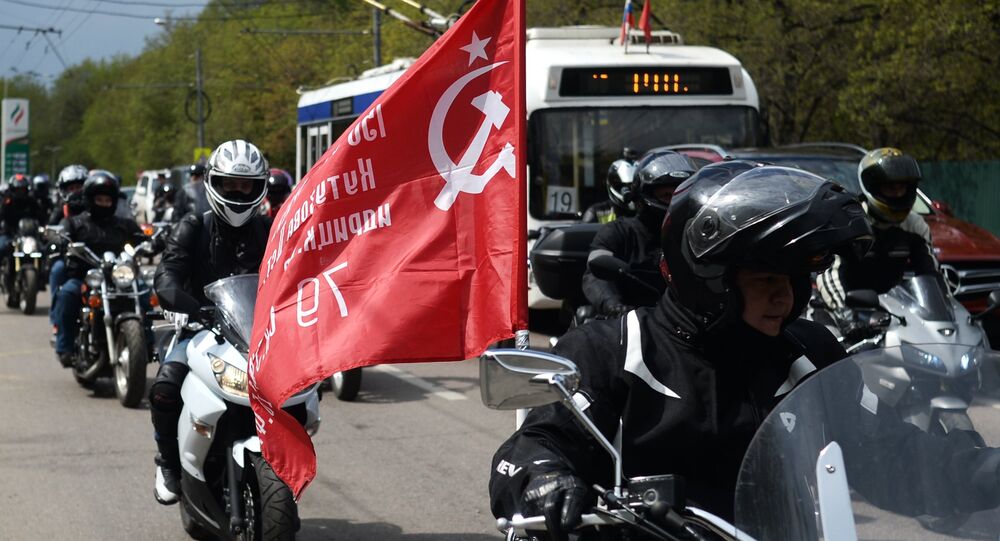 A record number of participants from European countries will join Russia's Night Wolves motorcycle club as they ride from Moscow to Berlin to honor of the 72st anniversary of victory over Nazi Germany in World War II, Night Wolves member Andrew Bobrovsky told Sputnik.

© Sputnik / Iliya Pitalev
Next Stop, Berlin! Despite Challenges Night Wolves Make it to EU, Thank Europeans for Support
In an interview with Sputnik, Andrew Bobrovsky, a member of Russia's Night Wolves motorcycle club, said that this year will see a record number of participants from a whole array of countries joining the Night Wolves' commemorative motocross from Moscow to Berlin to pay tribute to the 72st anniversary of the defeat of Nazi Germany in the Second World War.

According to him, the Victory Roads to Berlin motocross kicks off on April 27 in Moscow; the bikers will proceed to ride to Berlin via Belarus, Poland, Slovakia, Hungary and the Czech Republic.

He touted this year's motocross as "unprecedented," saying that "up to 1,000 people will join us," and that "we have never before received such a large number of applications from various countries."

He said that the Night Wolves commemorative trip will include a group of bikers from the Balkan countries as well as their colleagues from Poland, the Czech Republic and Slovakia.

"Will the Polish Foreign Ministry give us permission to enter? They are still dragging their feet on the matter, but we hope – in light of the experience of the past years — that we will receive visas at the last minute," Bobrovsky added.

During the motocross, the Night Wolves and their European friends plan to pay tribute to all of the citizens of European countries who died during the Second World War, the biker explained.

He said that "while in Poland, bikers will visit the Tomb of the Unknown Soldier in Pilsudski Square in Warsaw, the Red Army Cemetery in Wroclaw, the monument to the victims of the Volyn Massacre and the former Nazi concentration camp Auschwitz-Birkenau in Oswiecim."

Also, bikers will lay flowers on the memorial of the victims of the Slovak National Uprising in Banska Bystrica and Slavin Hill in Bratislava. In Budapest, the ceremony will take place at the main monument to the Soviet soldiers killed in WWII. In Prague, bikers will visit the graves of their fallen compatriots in Olshany and in Brno, they will also pay their respects to the memorial of the Red Army soldiers in the central cemetery.

In the Czech city of Decin, bikers will be joined by Jaroslav Foldyna, a member of the Czech Social-Democratic Party, who plans to take part in the Night Wolves motocross despite being reproached for his connections with the "pro-Kremlin" motorcycle club.

In an interview with Sputnik Czech Republic, Foldyna said that after a wreath-laying ceremony at a WWII memorial in Dacin, he and his Russian friends will visit the German city of Dresden.

"The Night Wolves have repeatedly been politicized in the Czech Republic, with the deliberate goal of fueling negative attitudes toward the Russian motorcycle club. But the main thing that unites us is our love of motorcycles and desire to honor the memory of those who were killed in WWII. This is something that brings more bikers to the Night Wolves with every passing year," Foldyna said.

© Sputnik / Maksim Blinov
Night Wolves Leader "Would Love Finns to Trust Russia More Than the US"
He specifically underscored that the Night Wolves hadn't come to the Czech Republic to mark the defeat of the 1968 Prague Spring events (the Warsaw Pact invasion of then-Czechoslovakia), but to honor the liberation of Europe from Nazism and pay tribute to the Soviet soldiers who gave their lives "for our freedom."

"Many are apparently are annoyed about the Banner of Victory carried by the Night Wolves. I hope that people understand what a historical artifact is, and that Night Wolves are not going to stage any political actions," Foldyna added.

"We must reckon with the fact that it was under the auspices of the Red Army Banner that a great victory was won. By the way, in May 1945, this banner with a star, a sickle and a hammer fluttered not only over Berlin, but also over Prague, Warsaw and Budapest, heralding the defeat of Nazism," he concluded.