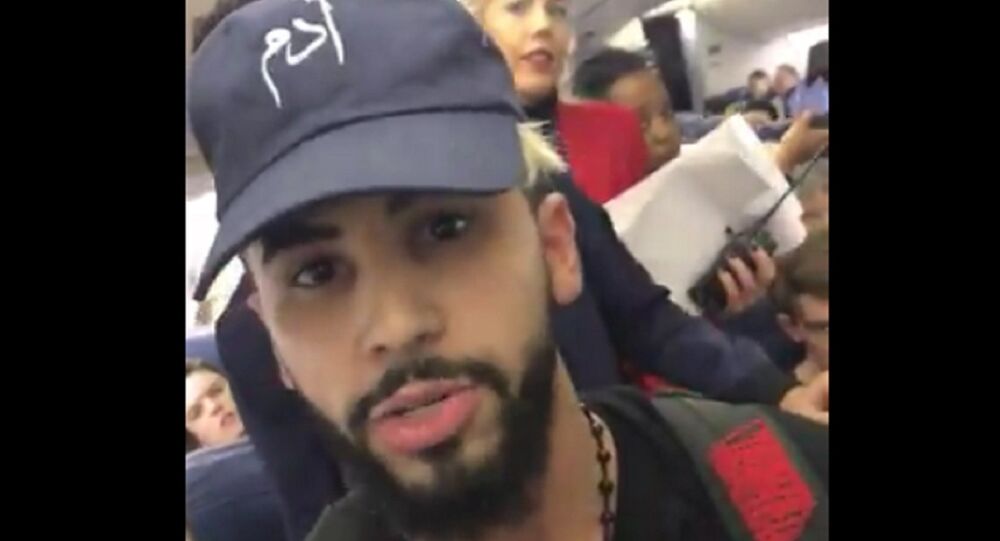 A YouTube star notorious for his many Islamophobia hoax videos, is alleging that he was kicked off a Delta Airlines flight for having a phone conversation with his mother in Arabic.

Adam Saleh has over 3.8 million subscribers over his two YouTube channels, which primarily consist of prank videos and discussions of his life as a Muslim.

In Wednesday’s video, Saleh filmed himself being kicked off a flight from Heathrow Airport to New York City, simply for speaking Arabic. Within hours, the video had been retweeted nearly 400,000 times.

One man is seen defending Saleh and his companion, while others shouted “bye.”

Saleh claims that he was on the phone with his mother who does not speak English, and that he speaks to her before every flight. He told CBS that, as he was having the conversation, a woman seated in the row in front of him turned around and demanded that he speak English. He claims that after he insisted that he can speak any language he pleases, her husband turned around and began to berate him.

"Adam made a phone call to his mother to let her know that he will be home in the next 7-8 hours after his flight and because Adam's mum only speaks Arabic, he was speaking to her in his language," a spokesperson said in a statement to USA Today. "Unfortunately this caused a problem amongst other passengers in the airline who got angry and started abusing him swearing and saying that they felt threatened."

Saleh and his friend were rebooked on another airline.

Just before this video, a friend that Saleh was traveling with posted a video of him going up to strangers and saying, “Om Telolet Om,” a confusing Indonesian viral meme based on the sound that busses in the nation make.

© Flickr / MTA
Muslim Student Made Up Story About Subway Attack By Trump Supporters
Delta released a statement saying that they are reviewing the incident, and that 20 other passengers had complained about his behavior prior to being removed from the aircraft.

“Two customers were removed from this flight and later rebooked after a disturbance in the cabin resulted in more than 20 customers expressing their discomfort. We’re conducting a full review to understand what transpired. We are taking allegations of discrimination very seriously; our culture requires treating others with respect.”

In 2014, Saleh went viral with a video titled “RACIAL PROFILING EXPERIMENT!” In the video, he and a friend perform two fake fights in front of a police officer, the first in typical US garb, and the second wearing Muslim attire. The officer only gets involved in the second fight, frisking the young man and asking “why are you dressed like this?”

The video has been viewed nearly two million times after receiving a wide array of media attention, but was later debunked by the Smoking Gun as a hoax.

Flights and airlines are often the settings for Saleh’s videos, with clips titled “COUNTING DOWN IN ARABIC ON A PLANE EXPERIMENT!!,” “ARABS ON A PLANE!!,” and “NEVER WEAR THIS ON A PLANE IN AMERICA!”

Saleh posted a hoax video just last week claiming that he snuck onto a flight in a suitcase. His claim was rapidly debunked by airline security footage, and they took to Twitter to call him out.

Saleh also has a history of “anti-black” commentary.

Despite Saleh’s history of hoaxing, Twitter was in an uproar over the footage, and #BoycottDelta trended globally.