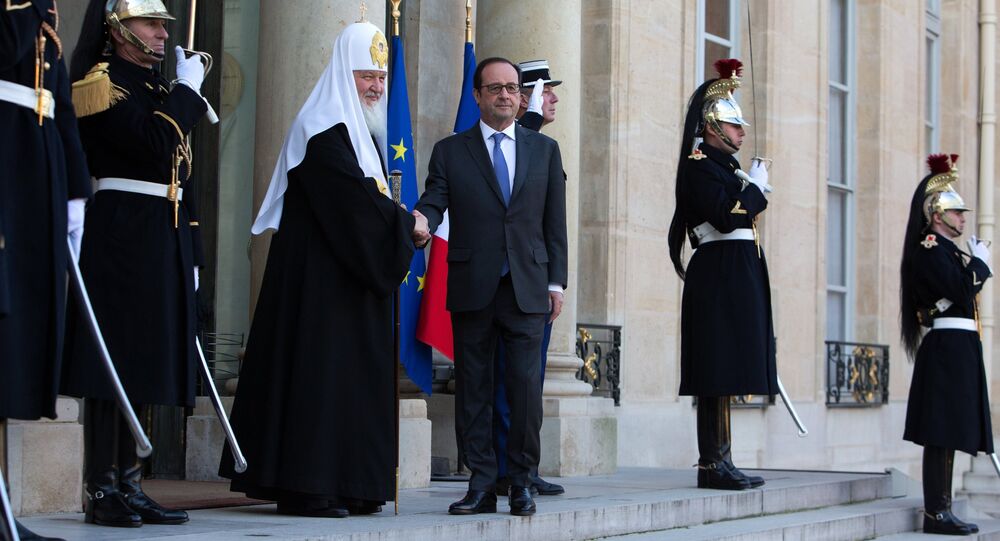 According to reports, Russian Orthodox Church leader Patriarch Kirill on Monday had a productive discussion on a number of topical issues with French President Francois Hollande.

"I have had a very good conversation with Frech Prsident Francois Hollande… A chance to meet with the president of France, the man at the helm of a secular state… it is a good signal that the secular authorities are ready to discuss with the Church the topical issues hat are important to all of us," the patriarch said after the meeting at the Elysee Palace.

The president and the church leader discussed the conflicts in Syria and eastern Ukraine.

"We believe that the peacemaking through the church is at the moment the only means of conciliation in Ukraine. Considering this, the peacemaking mission of the Ukrainian Orthodox Church has a very special part," Kirill said, referring to the eastern provinces of Ukraine that clashed with Kiev in 2014 in an attempt to gain independence, which led to the Ukrainian authorities launching a military campaign.

The two sides to the conflict in eastern Ukrainian region of Donbas have been struggling to fulfill all the requirements of the February 2015 ceasefire deal brokered by the leaders of Russia, France, Germany and Ukraine — the so-called Normandy Format — in Minsk.

Hollande stressed that France was supporting the Christian minority in Iraq and Syria, threatened by the rise of extremist Islamic movements, such as the Islamic State terrorist organization, banned in Russia and many other countries.

Kirill thanked the president for the opportunity to build an orthodox church and a cultural center in Paris, on the quai Branly, near the Eiffel Tower. The patriarch blessed the church on Sunday, during its first divine liturgy.