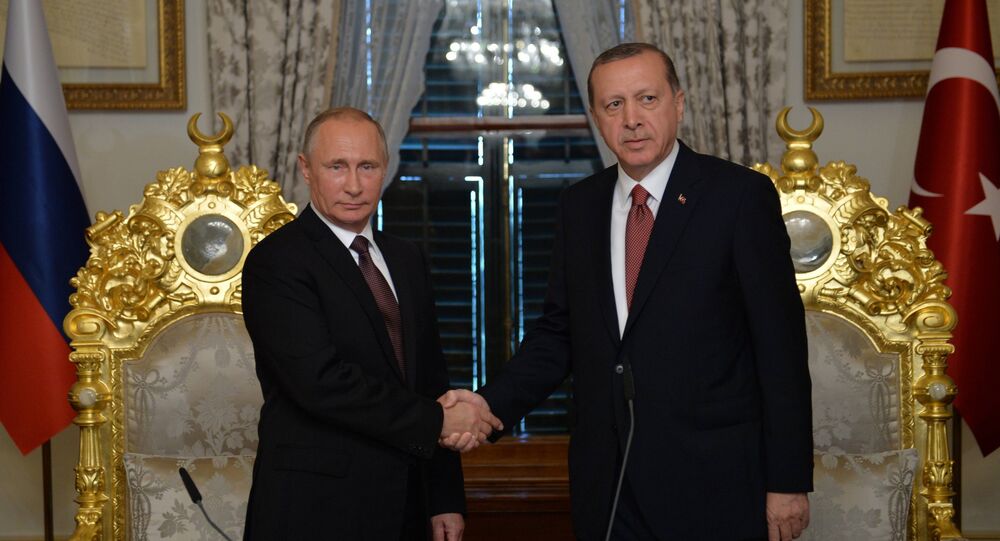 Russian President Vladimir Putin and Turkish President Recep Tayyip Erdogan signed a key energy deal, as well as reiterated the need for humanitarian aid deliveries to Syria, on the sidelines of the World Energy Congress in Istanbul.

Russian President Vladimir Putin arrived in Istanbul on Monday to attend a special session of the World Energy Congress, as well as to hold talks with his Turkish and Venezuelan counterparts.

After holding lengthy bilateral talks, the two leaders signed an agreement on the 'Turkish Stream' pipeline project, to step up preparations for the start of construction. The construction of the Akkuyu nuclear power plant was also discussed during the meeting.

According to Gazprom CEO Alexey Miller, the annual capacity of each leg is estimated at 15 billion and 750 million cubic meters of natural gas.

Turkish President Recep Tayyip Erdogan stated that Ankara is sure that the process of normalization of relations between Russia and Turkey will continue at full pace.

"We share with Turkey the understanding that every effort must be taken to ensure secure deliveries of humanitaian aid to residents of Aleppo," Putin said.

Russia's Roscosmos space corporation is ready to participate in launches of Turkish telecoms satellites, according to Putin.

"We have discussed expansion of our cooperation…in the area of space exploration," Putin said.

"In particular, Russian space corporation Roscosmos is ready to participate in a tender on construction and launches of Turkish telecommunication satellites," Putin said.