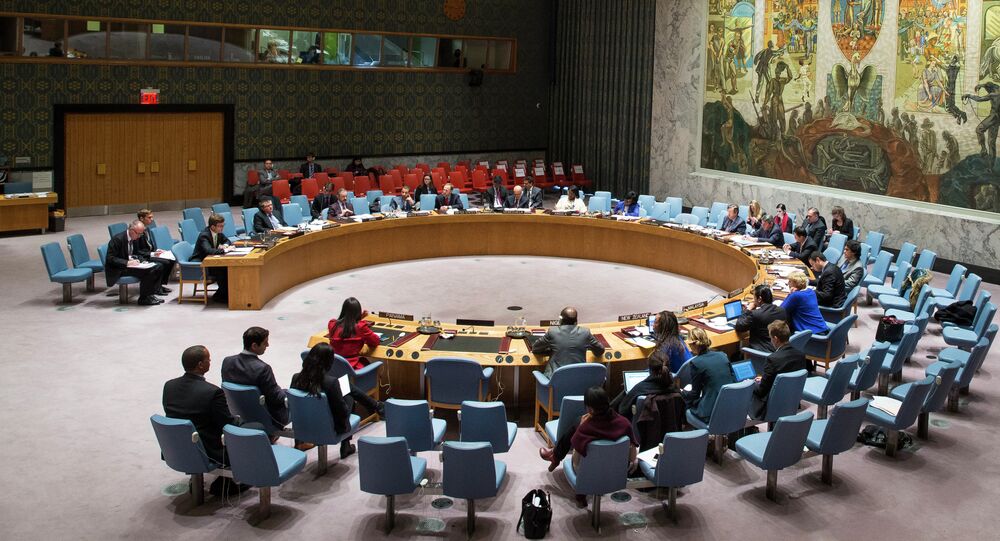 On October 1, Russia took over the rotating presidency of the UN Security Council, according to RIA Novosti.

© AFP 2020 / US AIR FORCE
Russia Wants Emergency UN Security Council Session on US Bombing of Syrian Army
The first session of the UN Security Council (UNSC) under Russia' rotating presidency is due to be held on October 3, when the work program for the month will be agreed upon, RIA Novosti reported.

It quoted Russia's Permanent Mission to the UN as saying that about 20 planned meetings will take place during Russia's UNSC presidency.

High on the agenda will be conflicts in Africa, including Sudan's Darfur region, the Democratic Republic of the Congo, Mali, the Central African Republic and South Sudan, as well as issues related to the Middle Eastern countries, including Syria, Lebanon, and Yemen.

On October 25, UNSC members will address a report issued by the UN Secretary General: "Women, Peace and Security."

"The main event of Russia's UNSC presidency will be the October 28 debates on the UN's cooperation with a number of regional organizations, such as the Collective Security Treaty Organization (CSTO), the Shanghai Cooperation Organization (SCO) and the Commonwealth of Independent States (CIS), according to Russia's UN mission.

On October 5, the Security Council is scheduled to vote on candidates for the post of UN Secretary General. With five rounds of the voting already held, former Portuguese Prime Minister Antonio Guterres is seen as a favorite.

"The Council will continue, and perhaps complete, the process of elaborating recommendations for the General Assembly on the nomination of the new Secretary General of the United Nations," Russia's UN mission said.

In October, the Security Council will continue to deal with the situation in Syria, which remains tense after the ceasefire agreement expired in this Arab country on September 19.

As far as Syria is concerned, UNSC members will traditionally hold three meetings, including those on the political and humanitarian situation in the country, as well as on the process of chemical disarmament.

However, given the current tensions in Syria, Security Council members may convene an emergency session which was the case in the previous months.

The Security Council, which bears "primary responsibility for the maintenance of international peace and security", comprises five permanent members, including Russia, the US, the UK, France and China, and ten states with a two-year-long term.

The presidency rotates on a monthly basis among all its 15 member states, depending on the English-language alphabetical order of their names.
In September, the UN Security Council was chaired by New Zealand, with Russia due to hand over the UNSC's presidency to Senegal on November 1.