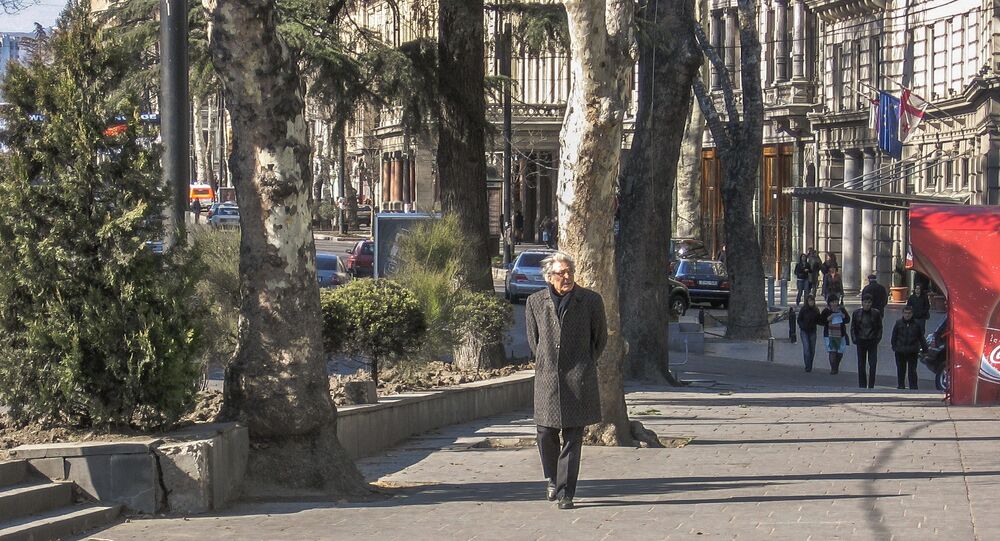 According to UN, Georgia among the countries whose population is projected to continue the trend toward depopulation in the decades ahead.

© AFP 2020 / Jewel SAMAD
Georgia Seeks to Create Constructive Atmosphere in Relations with Russia – PM
MOSCOW (Sputnik) – The United Nations experts placed Georgia among the countries whose population is projected to continue the trend toward depopulation in the decades ahead, a grim outlook, that, according to Georgia's Demographic Society XXI conservative organization, could be attributed to the influence of the Western liberal ideology, economic hardship and the policies of former Georgian president Mikheil Saakashvili.

The Georgian population has been diminishing since the Soviet Union collapse. In 2015, the National Statistics Office of Georgia released the results of the first census in more than a decade reflecting that the country’s population as of 2014 reduced to 3.7 million from 5.4 million in 1989.

Zviad Tomaradze, head of the organization, told Sputnik in an interview that massive emigration that took place immediately after the Soviet Union dissolution is not exclusively Georgia’s phenomenon but more of a natural reaction to the collapse of the Soviet system that has taken place everywhere throughout the USSR as some ethnic minorities such as Russians, Jews, Greeks, Armenians and others left the country. However, the depopulation trend remains 25 years after Georgia declared independence.

The United Nations Population Division, which issues statistics worldwide, placed Georgia among countries whose population is projected to decrease between 2015 and 2050.

"The United Nations has put Georgia on the list of 'Dying Nations' and 'Dying Languages',”  Zviad Tomaradze warned adding that according to the UN experts, in 2050 the Georgian population would decrease by 28 percent, while among the ethnic Georgians the depopulation will amount to 50 percent.

Tomaradze partially puts the blame for the plunging population crisis on an uncontrolled influx of liberal ideology and mainstream media propaganda in Georgia after the Soviet Union’s breakup.

In 2014, the Georgian parliament passed a law making it illegal to discriminate against people on the basis of their sexual orientation.

The UN forecasts are based on a level of birth in a particular country among other indicators.

According to the UN Population Division statistics, as of today, Georgia’s total fertility rate at 1.8 children per women, significantly lower than 2.1, the number of children women must have on average in order for the population to replace itself.

Tomaradze believes that the demographic crisis in Georgia should be also blamed on the economic hardships. “People have started feeling it is harder for them to have more children because they have limited means for existence,” he stressed.

However, Tomaradze notes that worldwide statistics speak of the opposite as the wealthier societies of the western world tend to have less children.

The head of Georgia's Demographic Society also points on the indirect link between demographic problems and activities of former Georgian president Mikheil Saakashvili.

“During 9 years of his rule, he put through jails as much as 330,000 people. For the country, like Georgia, with a little less than 4 million, that is a huge number. Every third Georgian man of working age went to jail in Georgia,” he noted adding that “some of them spent two horrible weeks, being prosecuted and extorted — money in exchange for settlement, some of them have spent years within the system.”

Saakashvili, a fugitive from prosecution in his homeland Georgia, was granted Ukrainian citizenship and appointed the governor of Odesa Region last year. He served as Georgia's president between 2004 and 2013 and left for the Unites States just days before his presidential term expired, and has been living outside Georgia ever since.