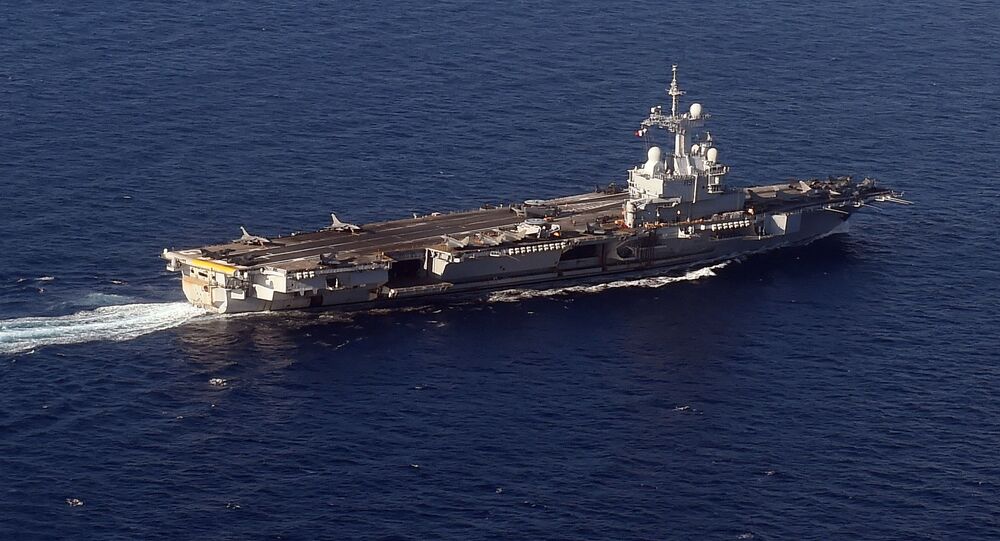 France will send artillery to Iraq and its Charles de Gaulle aircraft carrier to assist the US-led coalition’s efforts in Syria and Iraq in the coming months, but will not deploy its troops in these countries, French President Francois Hollande said Friday.

France will also send artillery to Iraq in August to help the Iraqi army fight Daesh terrorists, the President added.

© AP Photo / Manu Brabo
Three French Officers Confirmed Dead in Libya - Defense Ministry
"The Defense Council and I made a decision this morning to provide Iraqi forces with artillery as a part of anti-Daesh efforts. The artillery will be delivered in August," Hollande said.

The French aircraft carrier Charles de Gaulle will be sent to the region in September, the President added.

"The Charles de Gaulle airacrft carrier will arrive in the region by the end of September. It and our Rafale aircraft will allow to intensify our strikes against Islamic State positions in Syria and Iraq," Hollande said in a televised statement.

However, France "will not deploy ground troops," Hollande said.

"We support the operations in Syria and Iraq, but will not send our troops. We have advice to give, training to provide, but we will not deploy men on the ground," Hollande stressed.

© AFP 2021 / MOADH AL-DULAIMI
US Allies Unwilling to Create Ground Troops Contingent in Iraq - Carter
In 2015, the French aircraft carrier was deployed to the Persian Gulf to back military operations against Daesh terrorists. In spring of 2016 it returned to Toulon in southern France, where it underwent technical maintenance.

Iraqi forces are carrying out operations in Nineveh in preparation for an assault on Mosul, Iraq's second-largest city that has been under Daesh control since 2014.

The US-led coalition of more than 60 nations, including France, has been carrying out airstrikes in Syria and Iraq since the summer of 2014.