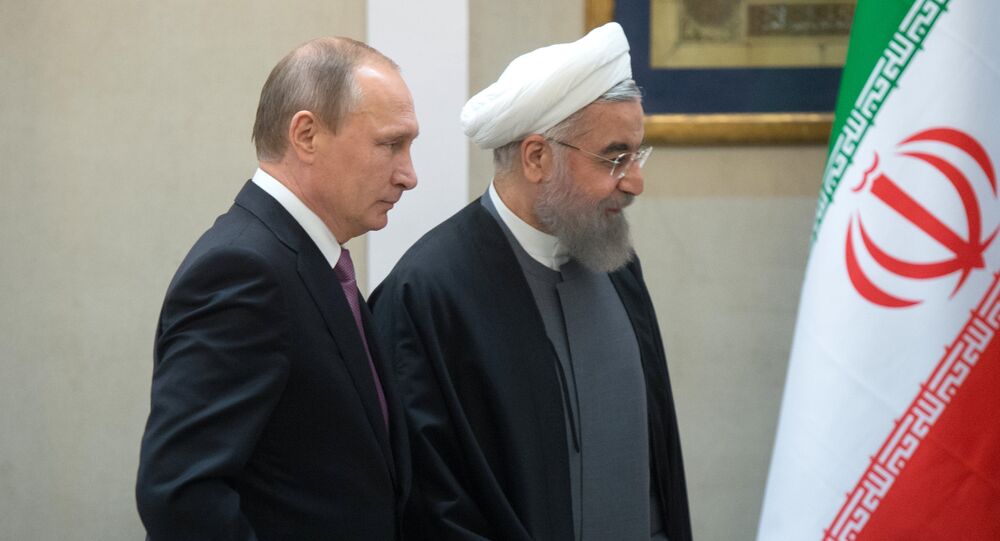 © Sputnik / Vladimir Fedorenko
West's Decision to Extend Anti-Russia Sanctions Would Be 'No Surprise'
In an interview with Sputnik, Omid Shokri Kalehsar, a US-based Iranian energy expert, heaped praise on Russia for providing Iran with a 2.5-billion-euro loan, which he said reflects Moscow's drive to bolster economic relations with Tehran in the face of anti-Russian sanctions.

The interview came a few days after Russia's Deputy Finance Minister Sergey Storchak said that Moscow is ready to loan Tehran up to 2.5 billion euros for infrastructure projects.

Kalehsar recalled that Moscow is currently constructing a bridge to link the Crimean Peninsula with mainland Russia, a 4.5-billion-dollar project which is being implemented amid sanctions that the EU, the US and other countries slapped on Russia.

"But in spite of this, Russia is ready to take the most difficult and important decisions, including on the issue of granting a hefty loan to Iran. In any case, everything is based on a mutually beneficial partnership with both parties due to get their desired benefits," Kalehsar said.

He added that the current 2.5-billion-euro loan is a sign that Russia and Iran intend to develop their economic ties and elevate them to a new level.

"Many Russian energy giants, such as Lukoil, Gazprom and Rosatom are returning to the Iranian market to continue bilateral cooperation in the energy sector. Right now, the sides are in the process of negotiating a spate of new major contracts," he said.

Kalehsar also pointed to the fact that even international sanctions against Tehran failed to keep Russia and Iran from developing a full-blown economic partnership.

© Sputnik / Pavel Lisitsyn
Speeding Up: Why Iran Wants to Receive Russia's S-300 as Soon as Possible
Major Russian companies that were engaged in the implementation of large-scale projects in Iran's energy sector at the time did their best to deliver on their promises and fulfill the infrastructure-related part of the projects, according to Kalehsar.

Since 2014, the European Union, the United States and their allies have imposed several rounds of sanctions against Russia, and accuse the Kremlin of interfering in the Ukrainian conflict — a claim that Moscow has repeatedly denied.

On June 28-29, the EU leaders are due to decide on the further prolongation of sanctions at a summit in Brussels.