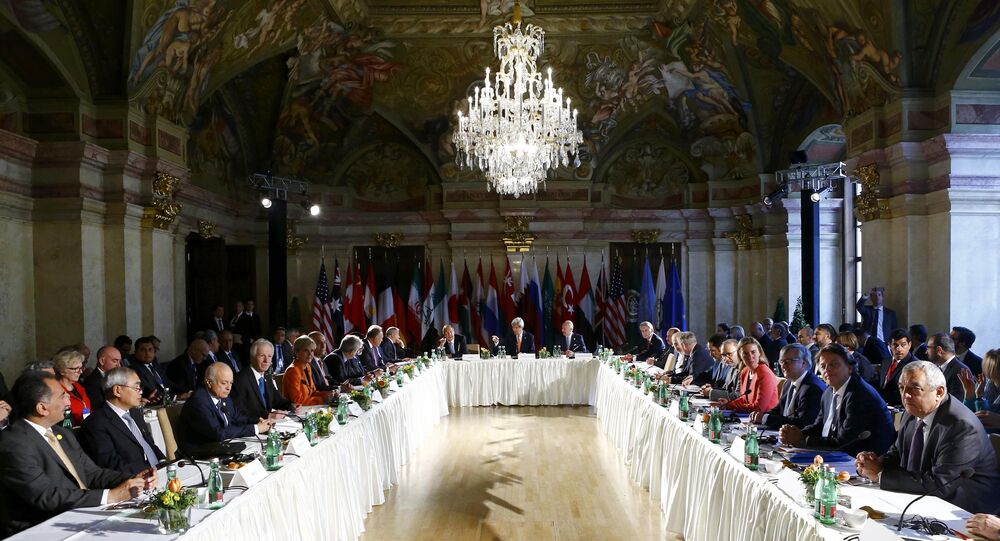 The French Foreign Ministry said in a statement on Wednesday that it supported calls for observing ceasefire in Syria stipulated in a communique issued following the meeting of the International Syria Support Group (ISSG).

© AP Photo / MAHMOUD TAHA
ISSG Call for Syrian Political Settlement Time Limits Positive Step
PARIS (Sputnik) – On Tuesday, the foreign ministers of the ISSG held a meeting in the Austrian capital of Vienna. A statement was issued at the end of the meeting, calling for the observance of the Syrian ceasefire, progress toward a peaceful political transition and sustained humanitarian access to the areas in need.

"The communique adopted in Vienna on May 17 is a useful achievement and should be now implemented by all the sides," the statement reads.

It was added in the statement that the ministerial meeting of the ISSG continued the initiatives started at the meeting of the Friends of Syria group in Paris on May 9.

The international community, including Russia, the United States and key European and Middle Eastern states, is undertaking steps to end the Syrian conflict and put an end to the five-year civil war.

The ISSG, co-chaired by Moscow and Washington, was formed in November 2015, shortly after the beginning of the Syria peace talks, as a panel of countries seeking to end bloodshed in Syria. The European Union, the Arab League, China, Iran, Turkey, and the United Nations are members of the group, among other participants.

The Friends of Syria format is a group of countries and international organizations that convene to discuss the topic of Syrian crisis outside the UN Security Council. France, Germany, Saudi Arabia, Turkey, the United Kingdom, Jordan, Qatar, Italy, the United Arab Emirates and the United States are among the members of the group.