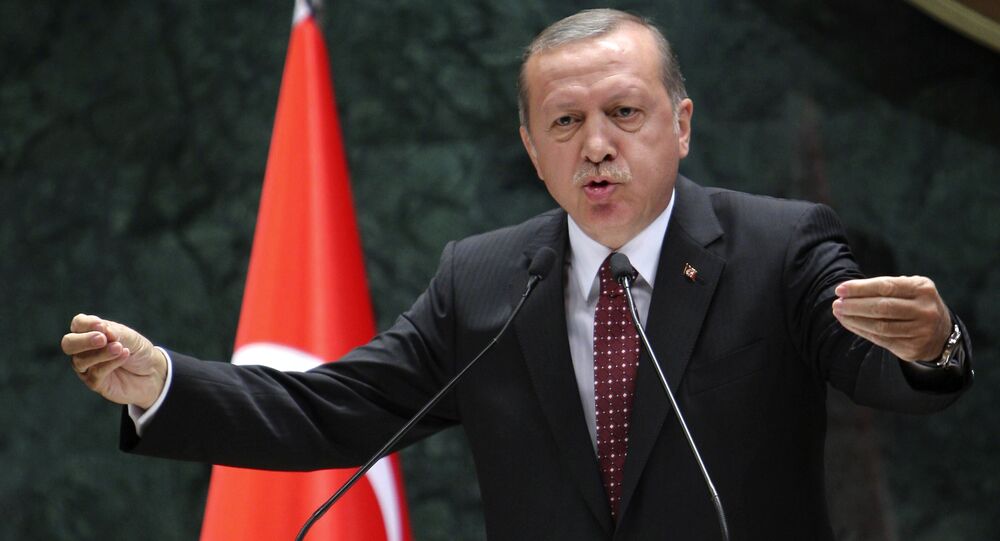 Now that Davutoglu has resigned and is no longer Turkey's Prime Minister, the country's President Recep Tayyip Erdogan is already openly ignoring the interests of NATO and the EU, political analyst Yuri Pochta told Sputnik.

© AFP 2021 / ADEM ALTAN
Fear and Loathing in Ankara: Why Erdogan Ejected Turkey's Prime Minister
In an interview with Sputnik, political analyst Yuri Pochta noted that Turkish President Recep Tayyip Erdogan is openly ignoring the interests of NATO and the EU in the wake of Ahmet Davutoglu's decision to quit the role of Prime Minister.

The remarks came after Davutoglu's May 5 announcement of his decision to step down as head of the ruling Justice and Development Party (AKP) and Prime Minister. He will perform his job as head of the government and the AKP's chairman until May 22.

"Erdogan is no longer going to heed the interests of NATO — on a number of issues he prefers to turn a blind eye to discipline, and he is also at odds with the European Union," Pochta said.

As for Davutoglu, he is "more diplomatic, more tolerant and less inclined to destroy the freedom of the press" in Turkey, Pochta said, noting that Brussels had pinned its hopes on the Turkish PM in light of the EU-Turkey deal on migrants.

"This could weaken Erdogan's authoritarian tendencies and he decided to nip it in the bud by actually prompting Davutoglu to resign," Pochta pointed out.

In mid-March 2016, Ankara and Brussels agreed to a deal under which Turkey pledged to take back all undocumented migrants who arrive in the EU through its territory in exchange for Syrian refugees residing in Turkey.

In return, the 28-member bloc promised to accelerate Turkey's EU accession bid and introduce a visa-free regime between the country and the Union.

In this vein, Pochta said that the outgoing Turkish Prime Minister could be made responsible for all the pressing problems in Turkey, including those related to the migrant deal.

"As an Oriental country, Turkey has a particular political culture where former allies can become arch-enemies. I think that Davutoglu will be blamed for all the problems Turkey has faced in the past few years. In this regard, I don't exclude a revision of the EU-Turkey migrant deal," he said.

© AP Photo / Burhan Ozbilici
From Bad to Worse: Erdogan Calls EU Safe Haven for Terrorist Groups
Meanwhile, the EU is considering alternatives to this agreement, one of which is to use Greek islands as reception centers, the German newspaper Bild reported earlier this week.

The islands of the Aegean may become temporary reception centers for migrants if the 6 billion euro (6.8 billion dollar) deal with Turkey falls through; in that case, the EU will send the money to Athens instead, Bild reported.

EU officials are making contingency plans because of the increasing likelihood that Turkey will not fulfil the conditions of its migrant deal, which was struck in November 2015 following negotiations between Davutoglu and the EU Council.