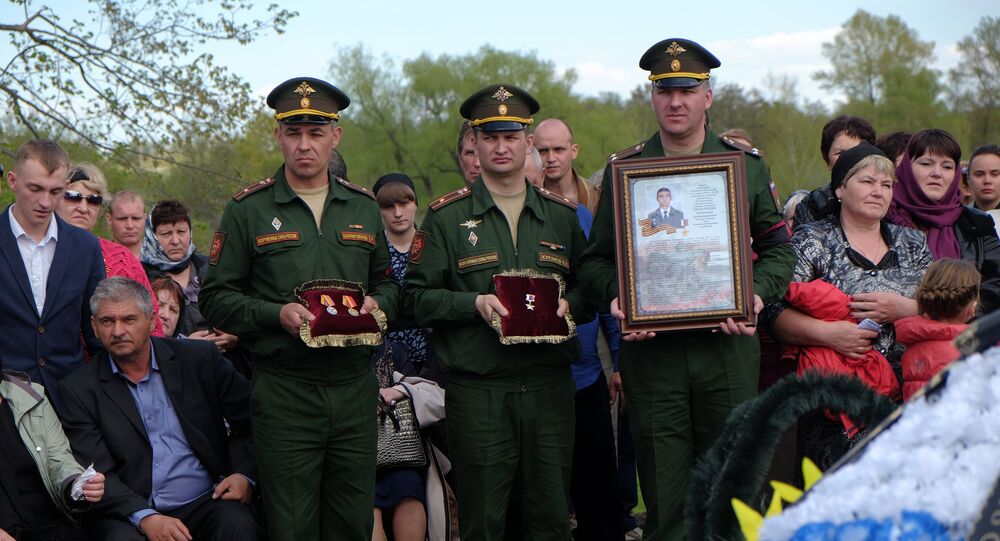 A Frenchman who sent his father’s Legion of Honor Order to the family of Russian officer slain during the liberation of Palmyra said that the fight against Daesh in Syria is just as important as the war against Nazis.

© Photo : Twitter/@AlphaSpecnaz
‘His Death Can Stop the War’: Syrian Film Director Mulls a Movie About Russian Hero Who Died in Palmyra
Daniel Couture, 80, a resident of the French city of Agde, has sent his father's Legion of Honor Order to the Russian Embassy so that it could be handed over to the family of Alexander Prokhorenko, a Russian officer killed in action during the liberation of Palmyra.

"I believe that the ongoing fight against the Islamic fundamentalism must be our priority, just like in 1942-1945 the priority was to destroy Hitler’s fascism which was a plague upon Europe. I fail to understand why Russians are treated as enemies, it should be the exact opposite. I believe that all of the people who fight against Daesh deserve to be treated as friends," Couture explained.

Couture told RT that the actions of the young officer have left an impression on him, and that he hoped that the award that was once issued to his father – a French combat pilot who died while fighting the invading Nazi German troops in May 1940 – would at least soothe some of the pain that Prokhorenko’s family has to deal with.

"I seek neither recognition nor glory. I merely follow my heart and act according to my convictions. I don’t need anyone to thank me – rather it is I who wishes to thank the Russian people for their victory in that war. I only wish to express my appreciation to the Russian people and my condolences to the family of that young soldier who was recently killed in Palmyra. Who died for the sake of us all, because the people he killed in Palmyra won’t be able to commit terrorist attacks on our soil," Couture said.

Senior Lieutenant Alexander Prokhorenko, 25, was killed in March during the battle to recapture the ancient Syrian city Palmyra from Daesh terrorists. While performing a reconnaissance mission he became surrounded by the enemy and instead of surrendering called in an airstrike on his position, taking down a number of enemy fighters with him.

Earlier, a couple of retired French citizens, the Mague family, also sent two WWII-era military medals belonging to their family, along with a letter of gratitude, to the Russian ambassador in France, asking him to forward the medals to the Prokhorenko’s family.