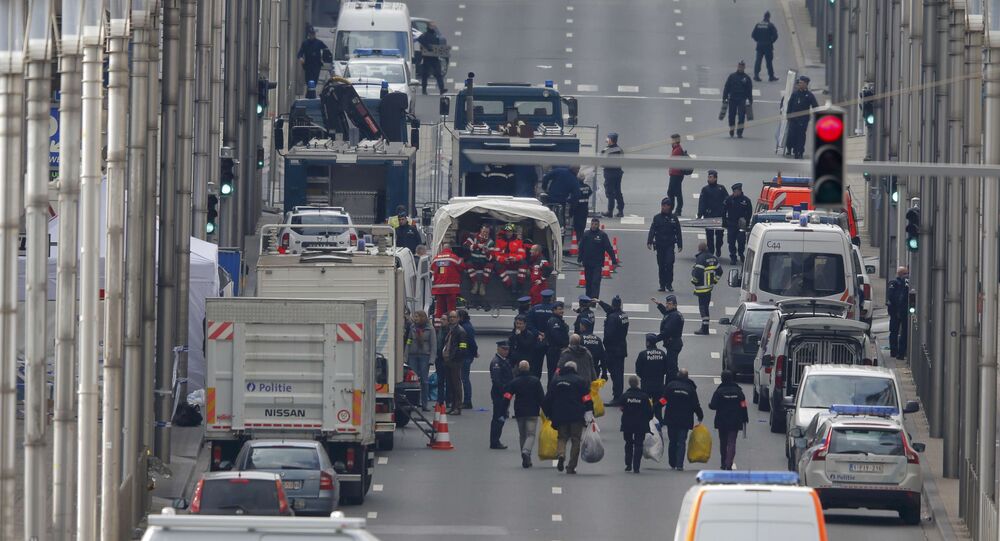 The terrorist attacks carried out in Brussels on Tuesday will have an effect on the EU's willingness to accept migrants, and the prevention of terror attacks requires the development of a collective plan to stop terrorism, President of the Turkish Human Rights Association Ozturk Turkdogan told Sputnik.

© REUTERS / Yorick Jansens
Blunders That Burned Brussels: Belgium's Six Main Security Failures
The terrorist attacks in Brussels on Tuesday that killed at least 31 people and injured approximately 300, for which the terrorist group Daesh has claimed responsibility, will affect Europeans' willingness to accept more migrants from the Middle East or other areas of conflict, President of the Turkish Human Rights Association Ozturk Turkdogan told Sputnik.

"First of all, I want to say that I condemn all these terrorist acts, and express my deep condolences to the families of those who were killed."

Turkdogan said that the terrorist attacks will have negative consequences for the treatment of Muslims in Europe, and result in an increase in mistrust. However, he added that the future of the agreement between Turkey and the EU, which had intended to stem the flow of migrants into Europe, was already in doubt before the attacks.

During 2015 more than a million migrants and refugees crossed into Europe, the majority from Syria, Afghanistan and Iraq, and 1.1 million were registered as asylum seekers in Germany alone.

"I think the terrorist attacks in Brussels will affect the EU's migration politics as a whole, particularly the implementation of the agreement between Turkey and the EU about migration, because at the moment the EU countries are in fear," Turkdogan said.

"In these circumstances Europeans are unlikely to want to accept more migrants. I am afraid that after the tragic events in Brussels that the attitude towards Muslims in Europe will worsen, the level of discrimination will rise."

The agreement between Turkey and the EU to stop illegal migration to Europe was doomed to fail before the attacks because it is unrealistic, he said.

© AP Photo / Cagdas Erdogan
Over 20 PKK Members Killed in Southeastern Turkey Within 24 Hours
The deal gives Ankara more than 3 billion euros ($3.3 billion) and political concessions including the speeding up of Turkey's EU accession talks, in return for stopping illegal migration and taking back non-Syrian migrants who try to cross into Europe. In return, the EU has agreed to distribute Syrian refugees from camps in Turkey across Europe.

"The EU demands that Turkey carry out fundamental constitutional and judicial reforms in quite complex areas. However, there is currently a war going on in towns in southeast Turkey, and within Turkey we are seeing a serious surge in Kurdish migration," Turkdogan warned.

"Of course, when the level of migration within the country is so high, the EU is not going to exempt Turkish citizens from the visa requirement. For as long as Turkey does not resolve the Kurdish problem, a visa-free regime with the EU will remain a dream, because millions of Turkish citizens want to travel to Europe."

A solution needs to be found to the Kurdish question and the Syrian crisis in order for the EU to reach a solution to migration and prevent terrorism, Turkdogan said.

"If Turkey and the EU really want to stop these terrorist acts, then above all they need to change their Syrian policy as soon as possible."

"It is clear that with regards to the Syrian problem and especially in relation to radical jihadist groups that Turkey and a set of EU countries continue to hold an ambiguous position."

"On the one hand, they announce war on Daesh, on the other hand they prevent the defeat of fighters in Cerablus, which is right on the border with Turkey and through which fighters and suicide bombers travel."

"Turkey and the Western countries not only don't take any action against them, they also don't allow others, particularly the Kurds, to attack them."

"As long as no common plan is formulated and put in place to fight terrorists, the bombings, unfortunately, will continue," Turkdogan warned.