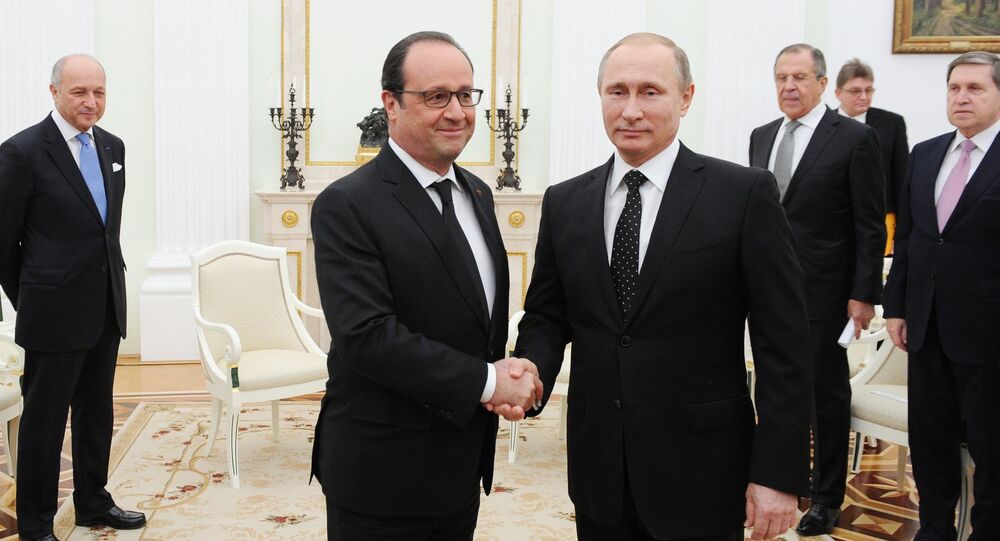 Russia and France have set aside their differences and re-kindled old ties in the wake of the Paris attacks, according to the French magazine Le Point.

© Sputnik / Host photo agency
Forget the US Coalition: France & Russia Destined to Team Up to Fight Daesh
Despite several unresolved points of contention, Russia and France have never abandoned bilateral relations; these have improved significantly since the November 13 terrorist attacks in Paris, the French weekly Le Point reports.

Remarkably, the magazine's latest edition features Russian President Vladimir Putin on the cover with a caption reading "Putin is Our New Friend."

According to the magazine, Paris decided to overlook Moscow's position on Ukraine and its support for Syrian President Bashar Assad, while Russia has chosen to move past France's decision to scrap the arrangement to sell Russia Mistral assault ships and implement anti-Russian sanctions.

"Ukraine? The unconditional support of Bashar Assad? Anti-European rhetoric? Elysee Palace forgot all this in the name of fighting terrorism,"Le Point said.

The magazine recalls that the day after the terrorist attacks occurred in Paris, President Putin ordered the Russian Navy command to get in touch with the French aircraft carrier Charles de Gaulle in the Mediterranean. As for the secret services of Russia and France, they had received the green light to freely share information collected on Syrian territory.

The French authorities have always realized that it is impossible to completely interrupt the dialogue with Moscow, Le Point notes, pointing out that in 2013, France ranked 8th among countries exporting to Russia, and Russia was France's third-largest international investor.

© AP Photo / Daniel Ochoa de Olza
French Media Reveals Conspiracy Theories Over Deadly Paris Attacks
With Moscow and Paris still at odds on a raft of foreign policy issues, they recognize each other's strength, Le Point says, singling out Russia's realization of the fact that it is better to develop military-technological cooperation with France than the United States, Britain or even China.

Paris, in turn, believes that unlike the US, Russia holds a leading position in Syria and that the Syrian conflict cannot be resolved without Moscow's participation, according to Le Point.

Thus, the fight against Daesh has shuffled the cards, prompting the two sides to pursue realpolitik for practical reasons, especially when it comes to war, Le Point concludes.