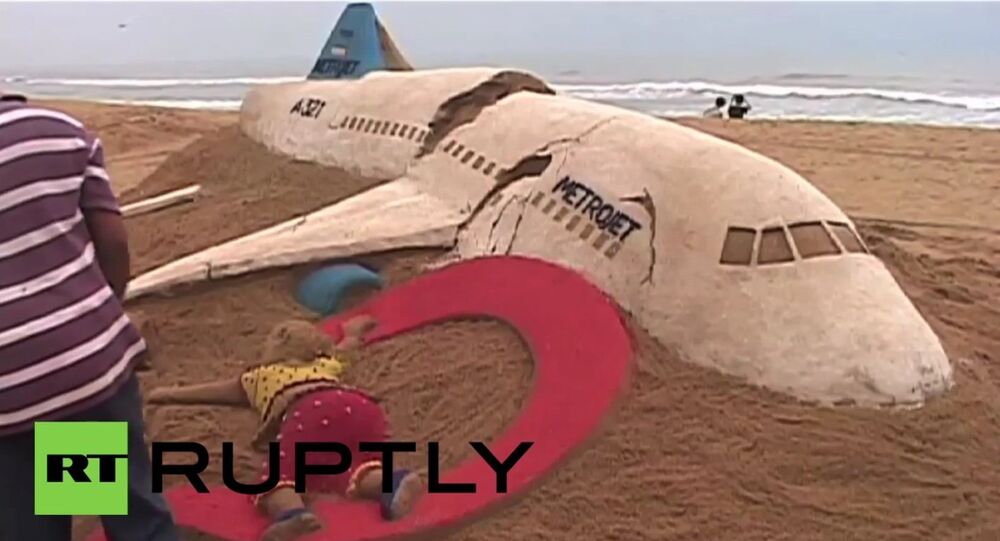 Indian artist Sudarsan Pattnaik created a sand sculpture on Odisha beach on Sunday in commemoration of the victims of the Kogalymavia airliner that crashed in the Sinai Peninsula in Egypt on October 31.

The artist shared the photo of his work via his social media accounts.

The sculpture includes a crashed Metrojet plane and a figure of a child lying next to it, above a big question mark. Among 217 passengers of the Metrojet airliner there were 25 children.

My sand sculpture to pay tribute to the innocent people who lost their life in the #AirbusA321 #Russianplane crash in #Egypt at Puri beach of Odisha on Sunday.

"Tribute to innocent souls", the inscription on the sculpture reads.

By making the boy's figure bigger than it should be compared to the size of the plane, the sculptor emphasizes the scale of the tragedy.

The position of the boy's body resembles that of the Syrian toddler Aylan Kurdi. Aylan's lifeless body washed up on a Turkish beach after the boat on which his family was trying to flee Syria with other refugees had capsized. Pattnaik's sculpture in tribute of Aylan Kurdi brought the entire world's attention to his work.

By positioning the bodies in a similar way Pattnaik probably wanted to underline that innocent children die all over the world.

The artist said that he was mourning for the victims with the rest of the world and expressed sincere condolences to the families and loved ones of the crash victims.

Russian Kogalymavia A-321 Planes Had No Engine Failures