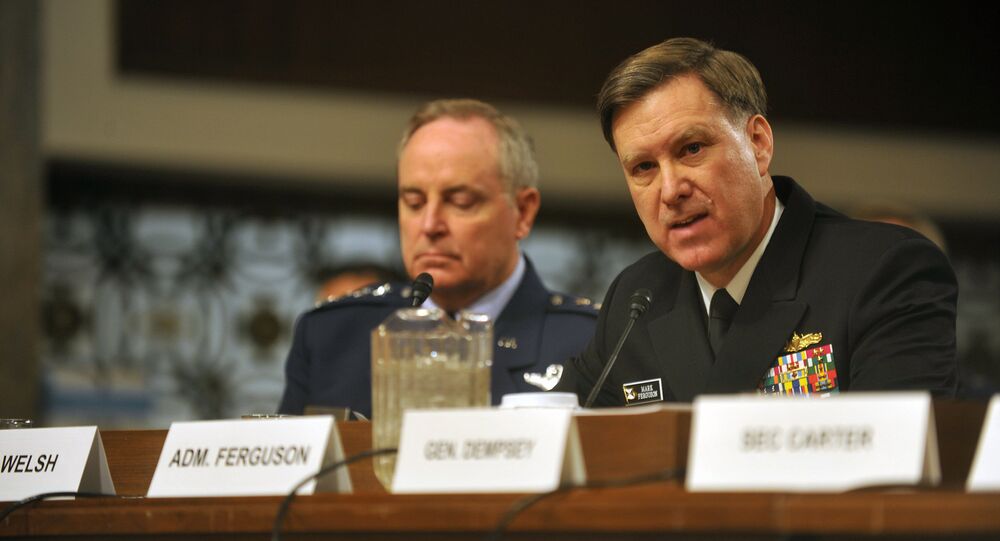 Commander of the Allied Joint Force Command Naples Adm. Mark Ferguson said that Russia has introduced air defense cruise missile systems and new platforms in the Mediterranean as it is “building the capability to project power into the maritime domain.”

"This remilitarization of Russian security policy is evident by the construction of an ‘arch of steel’ from the Arctic to the Mediterranean starting in their new Arctic bases to Kaliningrad in the Baltic and Crimea in the Black Sea," Ferguson said at the Atlantic Council in Washington, DC.

The US commander continued that Russia has introduced air defense cruise missile systems and new platforms as it is “building the capability to project power into the maritime domain.”

© Sputnik / Grigoriy Sisoev
NATO Ignores Moscow's Explanation of Turkish Airspace Breach
“Their [Russian] base in Syria now gives them the opportunity to do so in the Eastern Mediterranean," he added.

Ferguson said that in recent years, NATO has seen a "manifestation of a more aggressive, more capable Russian Navy" which is being deployed to focus on the seas surrounding Russia as well as in the Atlantic and Mediterranean.

The US Naval commander’s remarks come as the United States, in recent months, has been conducting multinational naval drills in the region, including with Ukraine in an effort to assure NATO allies they can quickly respond to the perceived threat of what they term Russian aggression.

In response, Russia has warned that NATO’s build up and expansion close to its borders is a provocative move and a threat to regional security.

"Their [Russia’s] intent is to have the ability to hold at risk maritime forces operating these areas and thus deter NATO operations," Ferguson said.

NATO has increased its military presence in Eastern Europe and the Black Sea since the outbreak of the conflict in southeastern Ukraine in April 2014.