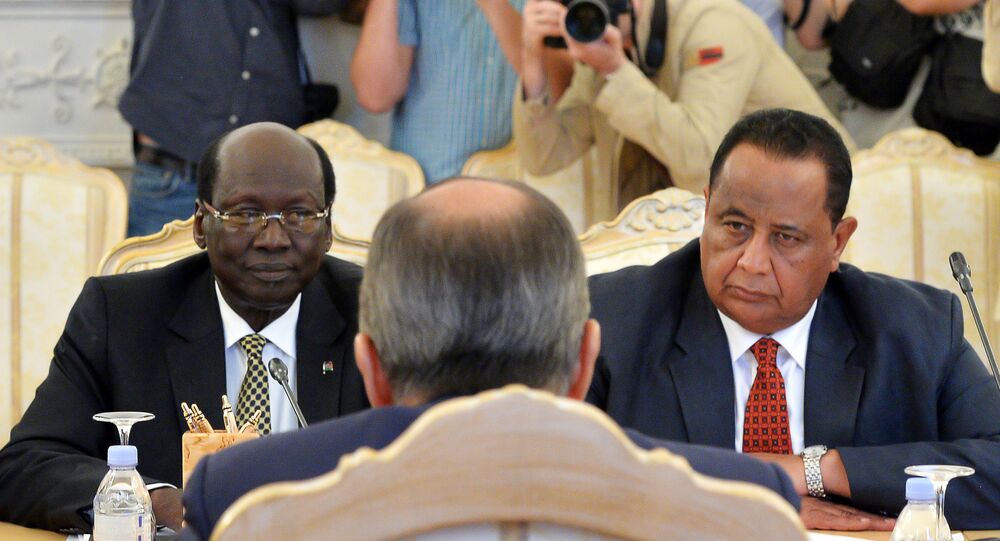 Nadir Babiker, the Sudanese ambassador in Moscow, said that Russia sincerely wants to contribute to the improvement of relations between Sudan and South Sudan, to foster stability.

© Sputnik / Vladimir Fedorenko
Sudan Parliamentary Delegation to Arrive in Moscow in Late September
MOSCOW (Sputnik) — The foreign ministers for Sudan and South Sudan have consolidated a format for constructive cooperation thanks to Russia's active role, the Sudanese ambassador in Moscow said Tuesday.

"I think that Moscow deserves this role — especially because the Russian authorities do not have any ulterior motives in this regard. They sincerely want to contribute to the improvement of relations between Sudan and South Sudan, to foster stability," Nadir Babiker said in an interview with RIA Novosti.

According to the ambassador, "both Khartoum and Juba believe that Russia's intentions are sincere," and Moscow can act as a mediator in the settlement of the inter-Sudanese conflict.

"In the past, we were negatively affected by the fact that the mediating nations pursued their own interests that run contrary to our desire to fulfill the idea of peace. Thanks to Russia, just five hours were enough to come to a common decision and agree the 'road map' on implementation the agreements signed in 2012," the diplomat stated.

Also Babiker stated that the Russian-Sudanese Commission on Trade and Economic Cooperation will hold its next meeting December 20-22 in the Sudanese capital of Khartoum.

"The next meeting [of the commission] is scheduled for December 20-22 in Khartoum," Babiker told RIA Novosti.

Babiker added that bilateral relations between Moscow and Sudan, both in economic and political spheres, had developed rapidly during the last several years.

Relations between the two African nations have been poor since South Sudan became independent from Sudan in July 2011. The two countries have not been able to agree on several issues, including the definition of borders and conducting a referendum on the status of the disputed oil-rich border area of Abyei.

Sudan Parliamentary Delegation to Arrive in Moscow in Late September