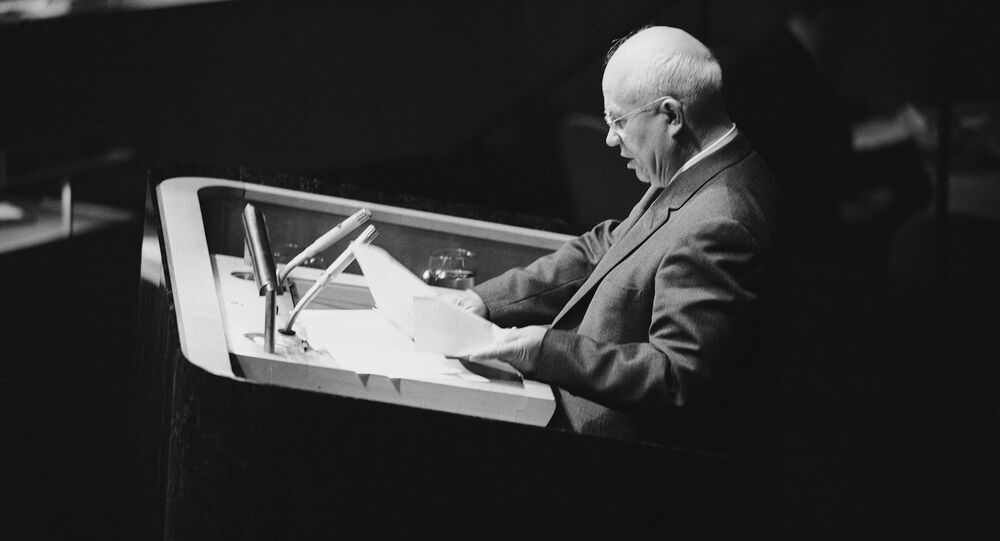 UN General Assembly: The Speeches That Made History

With the 70th session of the UN General Assembly opening in New York, it is a good time to look back on some of the memorable speeches delivered by world leaders at previous gatherings.

In his speech, Castro explained the true meaning of the Cuban revolution, the essence of the reforms announced by his government and warned Americans against attacking his country. He also touched upon aspects that led to the deterioration of US-Cuban relations.

October 12, 1960, Soviet leader Nikita Khrushchev gave his first speech at the General Assembly, where he supported African countries liberated from colonial dependence and called for complete disarmament in order not to have "means of warfare" anymore. Later, some media reports said that during the speech, Khrushchev allegedly banged his shoe against the podium at the General Assembly. Eyewitnesses claimed that all this happened after a representative of the Philippines compared the Soviet Union to a concentration camp.

My best memory at the UN: 23 Sep 2009 Muammar Gaddafi speech at General Assembly (Interpreter fainted in the cabin) https://t.co/ubAITDHwSo

On November 13, 1974, Palestinian leader Yasser Arafat was for the first time invited to the UN General Assembly at the request of the Non-Aligned Movement. In his speech, he called Zionism a form of racism, and a year later, the General Assembly issued the resolution "Elimination of all forms of racial discrimination". The document labeled Zionism as a form of racism and racial discrimination. The resolution was cancelled at the request of the United States and Israel after the collapse of the Eastern Bloc in 1991.

During the 42th session of the UN General Assembly on September 21, 1987, US President Ronald Reagan called the "alien threat" a powerful factor that will help settle a spate of conflicts between the countries. He first suggested this idea during his meeting with Soviet leader Mikhail Gorbachev in Geneva in 1985. Later, Reagan said it was his favorite science-fiction story, while the media reported that then-National Security Advisor Colin Powell allegedly tried to delete similar remarks from Reagan's official speeches.

© AP Photo / Gary Cameron
UN General Assembly Opens at Time of Turmoil, Hope – Ban Ki-moon
On September 20, 2006, then-Venezuelan President Hugo Chavez started his speech at the General Assembly by saying that "the devil came here yesterday," in reference to then-US President George W. Bush, who earlier in his speech at the assembly justified Washington's foreign policy. Chavez also accused the US of "exploitation, plunder and domination over the people of the entire world." In Venezuela, his speech was broadcast live and repeated several times throughout the day. US officials said that similar statements are not worthy of the country's president.

On September 23, 2009, Libyan leader Muammar Gaddafi warned against "political feudalism" and demanded that a permanent veto-wielding right should be given to all the UN Security Council members. He also said that Libya is not obliged to adhere to the resolutions of the UN Charter. UN speakers were supposed to limit themselves to 15 minutes, but Gaddafi's speech lasted about two hours. As a result, the exhausted Arabic translator had to be relieved by a colleague.

US Hopes to Advance Discussions on Syria During UN General Assembly