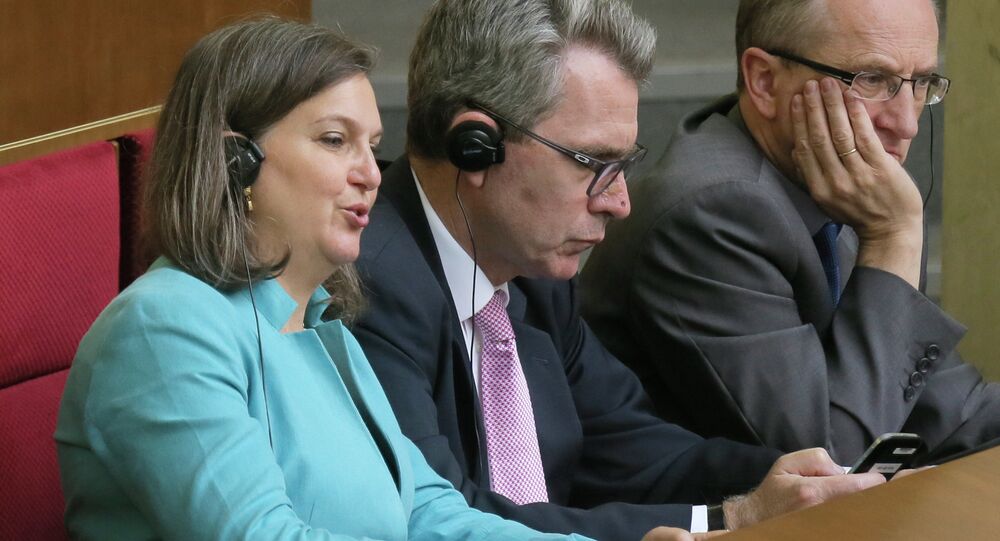 The head of the Russian Duma's International Affairs Committee has heaped scorn on US Assistant Secretary of State Victoria Nuland after her comments that Kiev's amendments to the Ukraine's Constitution were in line with the Minsk agreements.

© Flickr / U.S. Embassy Moldova
US Wants Balkans to Set Example to Ukraine, Middle East - Nuland
US Assistant Secretary of State Victoria Nuland recently claimed that Ukraine’s amendments to its constitution addressing the special status of Donbass show that Kiev has implemented its side of Minsk II, the second ceasefire agreement in the Donbass conflict.

Referring to the amendments, Nuland said that they will be "an answer to any questions on Ukraine's compliance with the Minsk agreements, whether these questions come from Donetsk and Lugansk, or from Moscow."

Alexei Pushkov, chairman of the Russian State Duma's Foreign Relations Committee, responded to Nuland's allegations by saying in his Twitter account that the amendments to Ukraine's Constitution, initiated by the country's President Petro Poroshenko, do not comply with the Minsk agreements.

"Nuland got ahead of herself. Poroshenko's amendments to the constitution are far from the Minsk Agreements and only close to his own political fantasies," Pushkov tweeted.

On July 16, Poroshenko submitted a proposal on constitutional amendments which would address the special status of the Donbass region to the Ukrainian parliament, the Verkhovna Rada.

© AP Photo / Fernando Vergara
Steinmeier: Ukraine’s Constitutional Reforms to Be Prerequisite for Donbass Elections
According to the Rada website, the draft proposals, which aim to revise Ukraine’s constitution, include a section on the special status of the Donetsk and Lugansk regions. Many lawmakers are reportedly opposed to the idea of adding the special status provision to the text of the constitution.

Earlier this week, the Russian Foreign Ministry said in a statement that the original proposals on amendments to the Ukrainian Constitution failed to comply with the Minsk agreements as Kiev had drafted the constitutional changes without consulting Donbass representatives.