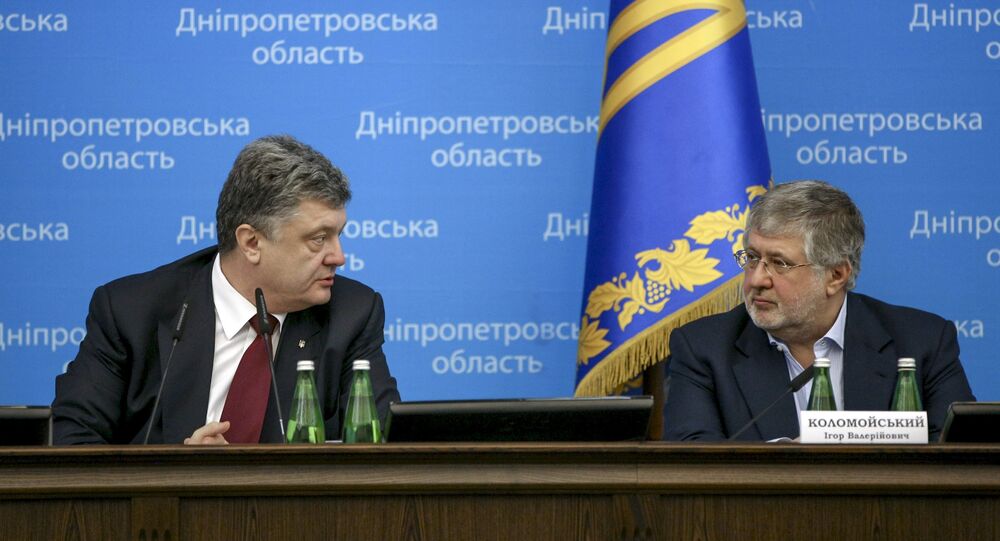 One Russian lawmaker has advised Ukrainian President Petro Poroshenko that he should refrain from cracking down on local oligarchs without admitting that he is an oligarch too.

YouTube/@PravdaRu
Biggest Threat to Poroshenko His Inner Circle: Kolomoiskyi on His Dismissal
Ukraine's President Petro Porosheko, who recently stated that he would clamp down on local oligarchs, risks sounding absurd in failing to admit that he himself is an oligarch, according to Alexei Pushkov, head of the Russian Lower House of Parliament's Foreign Affairs Committee.

"In order to prevent Poroshenko's determination to curb oligarchy in Ukraine from being ridiculed, he should start with himself, and not pretend that he is not an oligarch", Pushkov tweeted on Monday.

Earlier, Poroshenko had signed a decree to fire Ihor Kolomoyskyi, one of the richest people in Ukraine, from his role as head of the Dnipropetrovsk regional administration.

Relations between Kolomoyskyi and the Ukrainian authorities worsened after the Verkhovna Rada adopted amendments to the Law on Joint Stock Companies, which deprived Kolomoyskyi of control over the company Ukrnafta. In addition, differences have sparked in connection with the change of management of the company UkrTransNafta.

Until recently, the company was headed by Alexander Lazorko, considered to be a member of Kolomoyskyi's inner circle. Later, however, Lazorko was dismissed by the authorities, which remain the only shareholder of UkrTransNafta.

YouTube/ZOD_Profspilka
Irritated Poroshenko Shouts at Sacked Airport Workers, Threatens Arrest
Shortly afterwards, Kolomoyskyi arrived in the company's office accompanied by armed guards to stand up for Lazorko, resulting in a conflict between the country's best-known bearded billionaire and journalists who had arrived to report the story. This prompted Poroshenko to deliver a reprimand  to Kolomoyskyi for violating  professional ethics.

The fortune of Ukrainian President Petro Poroshenko is estimated at 750 million dollars, according to the ranking of Ukraine’s 100 wealthiest people conducted by Forbes Ukraine. Among his major assets is the Roshen Confectionary Corporation.

Under Ukrainian law, state officials are not allowed to wear 'two hats' as both public servants and major business leaders. In this sense, Poroshenko has yet to deliver on his pre-election promise that if he won the presidential elections he would sell Roshen.

In Guns We Trust: Poroshenko Prefers to Greet US Well-Equipped