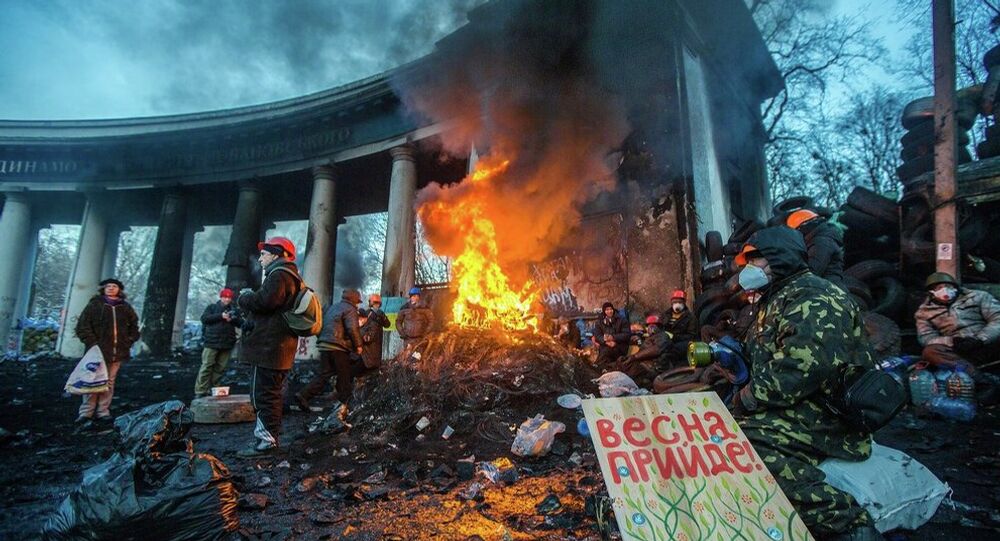 A year ago on November 21 the Ukrainian capital Kiev saw the first in a long wave of protests that toppled an elected president and eventually led to civil war in East Ukraine and to what many call a new "Cold War" between Russia and the West.

The Ukrainian government's last-minute decision to postpone a much-touted Association agreement with the European Union prompted a vigil by hundreds of people in Independence square in central Kiev in support of Ukraine's "European choice". Initially met with a heavy-handed response by the authorities, the protest soon acquired a broader agenda — against corruption and the rule of the oligarchs. The standoff continued for three months.

One year after Euromaidan. What do you think about last year’s revolutionary events in Ukraine?
Voted: 3
All polls
With massive backing from US and EU officials who became frequent guests on Maidan, the more radical elements from among the protesters forced the elected president Yanukovych out of office. But the tipping point did not come until after close to a hundred protestors and police were killed by mysterious snipers.

A year after the start of what its protagonists call a "revolution of dignity" Ukraine is in the grip of a de facto civil war with over 4000 dead and with large areas of the industrial heartland in the East devastated. An accompanying virtual economic war against Russia by the US and EU is mutually damaging and threatening the world economy with another recession.

But the "anti-Soviet revolution", as one Ukrainian historian put it, will not be over until the entire political system in Ukraine is completely overhauled. It looks like Leon Trotsky's theory of "permanent revolution" has found its ardent followers in Ukraine. The EuroMaidan that started a year ago was in fact the fifth in the string of mass protests that have been shaking Ukraine to the core since 1990.

The first "anti-Soviet" Maidan took place in October 1990 when students, mainly from Kiev, Lviv and Dnipropetrovsk set up tents on what was then called the Square of the October Revolution. They also occupied parts of the Kiev State University and started a fast in protest against the rule of the Communist party and in support of independence from the Soviet Union.

The protest only lasted two weeks as the then authorities offered a quick compromise to the students by sacking an unpopular Prime Minister. The protest had a bearing on the subsequent referendum on Ukraine's sovereignty but this "revolution on granite", as it became known, did not achieve much in the way of real democratic reforms.

As one of the activists reminisced much later, the ousted Prime Minister was made a scapegoat for all the government's sins, and some leaders of the student protest made a career in politics and government. But the victory was largely wasted; Ukraine stayed on its path of oligarchic capitalism and political favouritism.

Ten years later, a new generation of disgruntled young Ukrainians led a more sustained effort to change the system of government. Mass protests started in mid-December 2000 and lasted until April 2001. They targeted President Kuchma who, among other sins, was accused of complicity in the murder of a popular anti-establishment journalist. The protests culminated in violent clashes with the police near the presidential administration, the site of brutal skirmishes during the latest Euromaidan.

The difference was that in 2001 the perpetrators of violence were jailed for up to four years for their role in mass disturbances. To calm down the masses new scapegoats were sacrificed — the Interior Minister and the head of the Security Service. But President Kuchma survived. At one point Kuchma and his two closest associates signed a letter branding the protestors as "fascists". One of those associates was Prime Minister Victor Yushchenko who was soon after swept to presidency in the course of the so called Orange revolution. One of the protest leaders was none other than Yulia Tymoshenko, Yushchenko's ally in the Orange revolution.

Ukraine hardly had the time to settle down after the anti-Kuchma upheaval as a new Maidan got underway a mere three years later. It started on 22 November 2004 at the end of a presidential election that saw a very close victory for Victor Yanukovych over Victor Yuschenko. The Yuschenko camp cried foul and set up tents on Maidan.

After mass protests and under enormous pressure from the EU and US the Ukrainian Electoral Commission ordered a re-run of the vote which was won — again with a narrow margin — by Victor Yuschenko whose campaign colour was orange, hence the name of the "revolution". That split Ukraine right down the middle: while West Ukraine and western parts of Central Ukraine vote solidly for Yuschenko, eastern and southern regions voted for Yanukovych who campaigned under blue colours.

But while Kiev was the scene of an "Orange Maidan", the cities of Kharkiv, Donetsk and Lugansk held "Blue Maidans". Crimea was also solidly anti-orange. However, protesters in Kiev would have no time for their non-orange compatriots. The walls of the Central Post Office building on the Kiev Maidan still bear traces of graffiti hugely insulting to the people of East Ukraine.

The victory of the Orange camp was hailed as a turning point in Ukraine's history — a turning towards Europe and its values. But the euphoria was short-lived, as the winners got mired in political infighting while the oligarchs continued to consolidate their grip on power. It was not for nothing that the Orange revolution was also dubbed a "revolution of millionaires against the billionaires" by those in the know.

In the next presidential election in January 2010 the hero of the Orange revolution Victor Yuschenko got a humiliating 5.45 percent of the ballot. His rival Yanukovych who was denied a probable victory in 2004 was swept into power in a vote that was universally recognised as legitimate.

Shortly after the new president Yanukovych settled in his office, another protest camp popped up on Maidan. And as always it was late autumn. This time it wasn't about politics but about taxes. Small businesses — one of the three pillars of Ukraine's economy (the other two being the heavy industries of East Ukraine and migrant workers of West Ukraine, sending remittances from EU and elsewhere) — were dead set against the new Tax Code that they believed would ruin their livelihoods.

Their protest withered away after the authorities made some concessions in the Tax Code. The hard core of protestors who continued to camp out on the Maidan were moved on by the city maintenance services in December 2010 under the pretext of preparing the square for New Year celebrations. The authorities tried to use the same tactic to disperse the EuroMaidan crowds in December 2013 but this time it backfired with unimaginable consequences.

In November 2013 Ukrainians once again took to Maidan in their thousands to demand change. In the course of a violent coup, supported by the West, they deposed a legitimately elected president — just a year before the next election was due. A compromise reached in February with the mediation by the EU to move the election forward to December 2014 was dropped almost immediately, resulting in an upheaval not seen in Ukraine since the Civil War of 1918-1921.

Back then a famous Ukrainian poet Pavlo Tychyna observed in verse the favourite pastime of Ukrainians once they have "taken in the harvest":

On the Maidan by the church

You, the shepherd, cries the crowd

Shall command us to success.

All on horseback, off we go.

All in tumult and uproar

On the Maidan, the hubbub's dying

These days Pavlo Tychina is referred to as a "Ukrainian Nostradamus". Has he said anything about when the next Maidan is coming to Ukraine?

Arms Experts Believe Most Weapons In Ukraine Are Locally Sourced

IMF and Ukraine—Six Months After

US Fracking Its Way to Ukraine