A Malaysia Airlines Boeing 777 flying from Amsterdam to Kuala Lumpur crashed near the town of Torez in the Donetsk Region on Thursday, July 17, killing all the 283 passengers and 15 crew members on board.

MOSCOW, July 18 (RIA Novosti) - A Malaysia Airlines Boeing 777 flying from Amsterdam to Kuala Lumpur crashed near the town of Torez in the Donetsk Region on Thursday, July 17, killing all the 283 passengers and 15 crew members on board.

Media reports suggested that the ill-fated plane changed its route and was downed by a surface-to-air missile. But Malaysian Transport Minister Liow Tiong Lai said Friday the airliner did not divert from its previously approved flight path while travelling above the violence-hit country,

Earlier on Thursday, Malaysia Airlines confirmed it had lost contact with a Boeing-777 aircraft when it was in the Ukrainian airspace

Europe’s air traffic control service Eurocontrol said Friday it had no reason to believe the Malaysian plane had experienced any kind of problems before going off radar screens.

“We have no reason to assume whatsoever that there was anything abnormal with the flight before the flight disappeared from radar screen,” said Brian Flynn, the head of Performance, Forecasting and Relations in the organization’s Network Manager Directorate (NMD).

Kiev blamed independence supporters in the turbulent Donetsk Region for downing the passenger plane with a surface-to-air missile. Militia forces said they had no missile systems that could hit a target flying at an altitude of 10,000 meters.

The Russian Defense Ministry says it had intercepted the operation of a Ukrainian radar system on June 17, the ministry’s press service said Friday.

“Throughout the day on July 17, Russian means of radar surveillance intercepted the operation of the Buk-M1 battery’s Kupol radar station located in the region of the populated area of Styla (30 kilometers south of Donetsk),” the press service said in a statement.

“The technical capabilities of the Buk-M1 allow the exchange of data on air targets between batteries of one battalion. Thus, the launch of rockets could have also occurred from any of the batteries deployed in the populated area of Avdeevka (8 kilometers north of Donetsk) or from Gruzsko-Zoryanskoe (25 kilometers east of Donetsk),” the ministry said.

The Russian Defense Ministry also said the crashed airliner was out of Russian missile range.

“Boeing 777 flew outside of the Russian air defense coverage and was in the Ukrainian airspace under the supervision of its air traffic controllers,” it said in a statement. 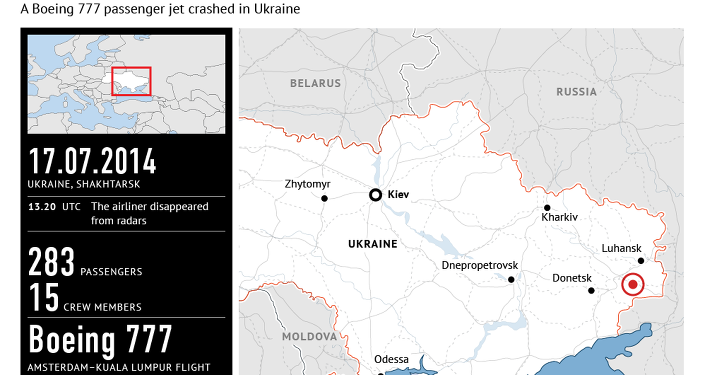 The ministry also stressed that its missile systems in the area close to the Ukrainian border were not operational. The same goes for the Russian fighter jets which didn’t run any missions in the airspace along the border that day.

Russian Foreign Minister Sergei Lavrov said Friday that the Kiev government’s claims that the crash was a terrorist attack is “inadmissible and constitutes an attempt to manipulate the opinion of investigators.”

“Naturally, attempts to claim that it was a terrorist attack, so Ukrainian investigators will keep this in mind while doing their work, is an inadmissible pressure on this commission’s activities,” the minister said.

Both of the airliner’s flight recorders have already been found.

Ukraine was very concerned about the removal of them from the country. The Ukrainian Foreign Ministry said Friday such a move would be considered a criminal event.

"The on-board flight recorders should remain in Ukraine," the director of the Ukrainian Foreign Minstry's department of consular service, Andrii Sybiha, said.

"Their removal across the border would be criminal," Sybiha concluded.

But Russia said it had no plans to obtain flight recorders of the Malaysian airliner.

“We think that international experts should arrive at the crash site as soon as possible and obtain the “black boxes” immediately. Contrary to Kiev’s statements, we do not plan to violate the norms that exist in the international community for such cases,” Russian Foreign Minister Sergei Lavrov said Friday.

“This is the business of ICAO [International Civil Aviation Organization] and the countries directly linked to this tragedy – the Netherlands, Malaysia and other states whose citizens were on board, and of course, Ukraine,” he said.

But Sergei Lavrov said Moscow will insist on making the investigation into the crash as independent and transparent as possible.

“We will insist on [conducting] an investigation [that would be] as open [and] independent as possible,” he said in an interview with the Rossiya 24 TV channel.

He added that Russia is ready “to make its contribution, but, naturally, we think that the initiative should be taken up by the government of the country where this tragedy took place.”

The Interstate Aviation Committee (IAC) said Friday it can start investigating the aircraft crash in Ukraine only after determining all the participants of the respective investigative commission.

"There must be a decision to form a commission investigating the accident determining all the involved sides, states and international organizations. So far there has been no such decision," deputy head of IAC Sergei Zayko said in an interview with Russia's Channel-1 TV station.

In response to the tragic event, Russia’s Federal Air Transport Agency (Rosaviatsiya) urged the IAC to bring together all the respective stakeholders and take lead in the investigation of the crash.

“There’s no doubt that the country, in whose airspace it [the crash] took place, should take responsibility for this terrible tragedy,” Putin said at a regular government meeting.

The Russian president called for a moment of silence to remember all people who lost their lives in this horrible crash. Earlier that day, President Putin also sent his condolences to Malaysian Prime Minister Najob Razak.

Putin stressed nothing of this would have happened if Kiev hadn’t resumed its deadly military campaign against self-defense forces.

“This tragedy would have never happened if there were peace in that country, if military actions in Ukraine’s southeast had not resumed,” he noted.

Russian leader also asked the government to do everything possible to establish the cause of the deadly crash.

“I call on the Russian government to use every civil service at its disposal to thoroughly investigate this incident,” he said. “We must do everything in our power to make the objective picture of the events available to our people, and the people of Ukraine, as well as worldwide,” Putin added.

“It is all absolutely intolerable, and no one can close their eyes to this [tragedy] without making corresponding conclusions and without helping us gather objective information on the incident,” he stressed.

Putin also said he had already ordered Russian defense agencies “to render all necessary assistance in investigating this crime.”

Russian Emergencies Ministry said earlier that there were no Russian citizens on board the airliner and offered its Ukrainian counterparts help with investigating the crash.

Early on Friday, UN Secretary-General Ban Ki-moon has called for a full, transparent international investigation into the tragedy.

“There is clearly a need for a full and transparent international investigation,” said the UN chief.

He added that he was following closely every report on the accident together with the International Civil Aviation Organization.

And expressed his deep condolences to the families and friends of the victims.

“For the moment, I offer my deep condolences to the families and loved ones of the victims and people of Malaysia,” Ban Ki-moon said.

The head of the EU diplomacy Catherine Ashton noted on Friday the deadly crash highlights the pressing need to immediately end the violent conflict in the east of the country.

"This is another stark illustration of why it is so urgent to bring this conflict to an end. Without prejudging the facts behind the crash, we call on all parties to stop the senseless loss of life in Eastern Ukraine, to refrain from any escalatory acts, and to agree to an immediate cease fire," Ashton said in a statement.

"The circumstances must be clarified without delay and the international investigation must shed full light on this tragedy. We call on all parties in the region of the crash to provide full access to the crash site, so that it can be secured immediately, to cooperate fully and to share all relevant information," Ashton stressed, joining the world's most prominent international organizations and political leaders in their call for immediate full-scale investigation of the accident, adding the EU is "shocked by reports of the circumstances surrounding the tragic loss of a Malaysian Airlines flight."