Thousands of people, many of them waving flags of Ukraine and opposition political parties, assembled in Independence Square to listen to speeches throughout the day calling for the government’s ouster and condemning last week’s heavy-handed treatment by police of demonstrators camped in the square.

Rallies in Kiev and in other cities across Ukraine erupted late last month in reaction to the government’s decision to back away from a deal to sign association agreement and free trade deals with the EU.

It is unclear to what extent the three opposition parties most actively engaged in the protest – Batkivshchyna (Fatherland), Udar (Punch) and Svoboda (Freedom) – are in fact in control of this wave of discontent, but they have served as its public face and have laid out conditions for negotiations with the authorities.

The protest movement appeared to be losing momentum until November 30, when police aggressively cleared Independence Square, sparking outrage and prompting hundreds of thousands to rally on the spot the following day.

Talking to reporters at the united opposition movement’s headquarters, Udar leader and heavyweight boxer Vitaly Klitschko demanded punishment for those involved in the raid on the square and the resignation of the Cabinet as a precondition for talks to create a technical government.

Arseny Yatsenyuk, who leads the Batkivshchina faction in parliament, said the technical government could undertake the task of signing the EU pacts abandoned by Yanukovych.

Another major rally, which organizers hope will attract a crowd of up to one million people, has been organized for Sunday.

Independence Square, an area in downtown Kiev that served as the focal point of the October Revolution of 2004-2005, has for the last week been cordoned off by protesters, who erected tents equipped with heating stoves, food distribution points and a stage from which activists address the crowd.

Many are occupying the square on a round-the-clock basis, huddling around wood-fueled fires in metal barrels to keep warm as temperatures hover around freezing point. Speeches to the assembled have alternated with musical acts, creating a festive mood among the determinedly peaceful crowd.

In what has become a verbal motif of the protests, speeches conclude with the recurring slogan “Glory to Ukraine,” to which the crowd replies in chorus: “Glory to the Heroes.”

Flags being waved include mainly that of Ukraine, but also those of the EU and the Udar and Batkivshchina and Svoboda parties. The unlikely trio underlines the varied spectrum of the coalition, which ranges from modernizing liberals to hidebound Ukrainian nationalists, such as those in the ranks of Svoboda, which has in the past come under fire for taking radical far-right positions.

The protest movement, dubbed Euromaidan, a portmanteau word from the Ukrainian for Europe and square, has also drawn political support from abroad.

Several international politicians, including European Parliament deputies and Georgia’s former President Mikhail Saakashvili, traveled to Kiev over the weekend in a show of support for the pro-European protests and condemned what they called Russia’s pressure on Ukraine.

“The aim of our visit is to show our solidarity with Ukraine’s European choice,” Saakashvili said. “European Union is the only feasible alternative for this great, amazing nation.”

Indignation at Russia’ s perceived role in Ukraine’s decision to back off from closer integration with the EU was reflected in speeches on Independence Square pouring scorn on Yanukovych’s visit on Friday to Russia, where he met with President Vladimir Putin.

Ukrainian Prime Minister Mykola Azarov announced late Friday that a major economic deal with Russia was imminent. Officials from both countries are set for a high-level meeting in Moscow on December 17.

“We are talking about preparations for a big agreement about strategic partnership with the Russian Federation,” Azarov said.

While no specific details have yet been made public, Azarov said that the leaders of Ukraine and Russia discussed a road map for the elimination of trade conflicts, in particular disagreements over gas supplies.

The encounter between Yanukovych and Putin has sparked widespread speculation that Russia is offering Ukraine billions of dollars of support and a discount on natural gas deliveries in return for Kiev committing to enter the Moscow-led Customs Union trade bloc.

But Kremlin spokesman Dmitry Peskov said no agreements on an energy deal had been reached and that Ukraine’s accession to the Customs Union was not discussed.

The political impasse created by Kiev’s reversal of course on the EU deals follows months of testy confrontations between Ukraine and Russia.

Russia has openly lobbied for economically struggling former Soviet nations, such as Ukraine, Armenia and Kyrgyzstan, to join the Customs Union, which some view as an exercise by Moscow to reassert regional influence.

Ukraine has tended to play it cool over such initiatives.

It has had to contend, however, with the realities of economic dependence on Russia. Moscow-initiated embargoes in recent months have badly hurt Ukraine’s economy, and the Kremlin has ominously warned of an intensification of such measures were Kiev to sign up to closer integration with the EU, which Russia believes would damage its own economy.

Earlier this year, Russia cited hygiene concerns when it slapped an import ban on the products of a major Ukrainian major candy maker that provides work for thousands of people. The owner of the candy maker, Petro Poroshenko, has played a highly visible role in the evolving protest movement.

Russia’s state-owned Gazprom charges Ukraine high prices for its natural gas supplies and is currently demanding the settlement of around $2 billion of unpaid bills. 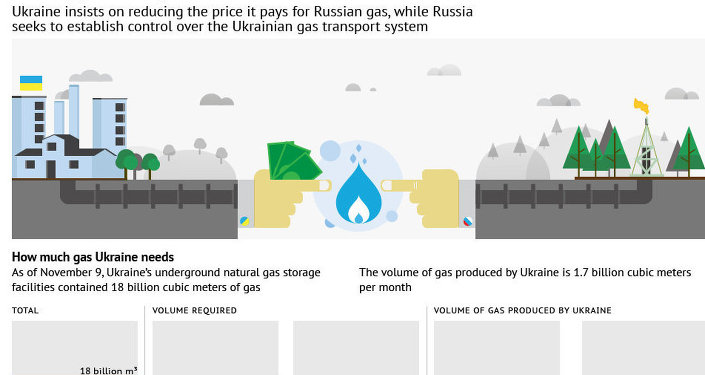 “Putin’s Russia says: ‘We can do bad things to you, we can cause you a lot of pain. If you don’t agree to our terms, we will hurt you.’ This is the logic of a bandit and racketeer. It is not the logic of a civilized country,” he said.