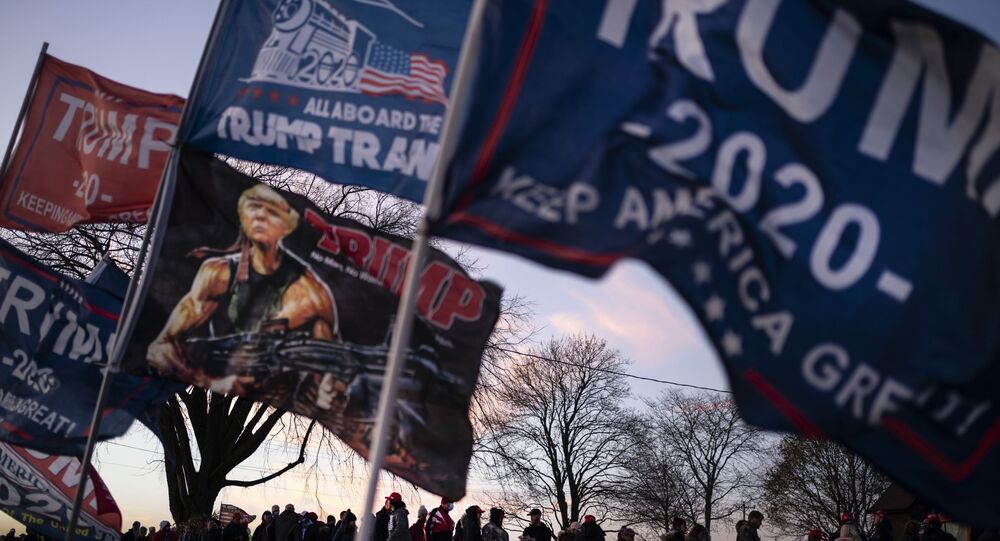 With postal ballots still making their way to polling stations in some of the US states, including the key battleground of Pennsylvania, it may be days before it becomes clear who will occupy the White House for the next four years.

In the early hours of Wednesday, Donald Trump took to the stage to thank American voters for “tremendous support”, claiming that the election result showed that his campaign was now “winning everything”. The incumbent President also urged that votes coming to the polling stations after they are closed should not be counted in what he saw as “a major fraud on our nation”.

The President later added that it was “strange” that his lead in key battleground states run by Democrats “magically” disappeared the next day after “surprise” ballots were counted.

With election results still unclear in key swing states, most world politicians refrained from prematurely congratulating Trump, or his Democrat contender Joe Biden, with victory, as Japanese Finance Minister Taro Aso insisted that “it may take some time before things are sorted out”.

European Union Foreign Affairs Chief Josep Borrell said that “while we wait for the election result, the EU remains ready to continue building a strong transatlantic partnership, based on our shared values and history.”

“This is a very explosive situation”, German defence minister Annegret Kramp-Karrenbauer said on ZDF referring to the pending voting results. “It is a situation which experts rightly say could lead to a constitutional crisis in the US. That is something we must certainly be worried about.”

Her precautions were shared by the country’s Minister for Economic Affairs and Energy Peter Altmaier, who is also considered one of Angela Merkel’s most trusted advisers.

“I’m afraid that if it is a close result there will be a very, very long discussion. Regardless of who wins, it is bad that the US election campaign was mainly conducted on domestic issues”.

As Bundestag Foreign Affairs Committee Chairman Norbert Röttgen, noted, Germany was “not prepared” for such a tight situation, and Vice-Chancellor Olaf Scholz urged people not to rush to conclusions and wait until all the votes are counted to “have a clear result”.

German Foreign Minister Heiko Maas later added that American politicians had to ensure "trust" in the outcome of the election.

However, French Minister of the Economy and Finance Bruno Le Maire said that neither Trump’s nor Biden’s potential win would make any difference for apparently strained trade relations between the two countries.

"Let's not kid ourselves: The United States has not been a friendly partner to European states for several years now," the minister told Radio Classique on Wednesday.

"Whether Joe Biden or Donald Trump is elected by Americans tonight or tomorrow, nothing changes this strategic fact. The American continent has detached itself from the European continent."

The cautious mood was not shared in Slovenia, the first lady Melania Trump's native land, with Prime Minister Janez Jansa assuring listeners that the winner of the election was now obvious, as he had congratulated the Republican Party with a big win on Wednesday.

It’s pretty clear that American people have elected ⁦@realDonaldTrump⁩ ⁦@Mike_Pence⁩ for #4moreyears. More delays and facts denying from #MSM, bigger the final triumph for #POTUS. Congratulations ⁦@GOP⁩ for strong results across the #US ⁦@idualliance⁩ ⁦ pic.twitter.com/vzSwt9TBeF

UK Prime Minister Boris Johnson stopped short of commenting on “the democratic processes of our friends and allies” despite calls from Labour leader Sir Keir Starmer.

Meanwhile, Foreign Secretary Dominic Raab said that relations between London and Washington will “go from strength to strength whichever candidate wins the election,” although, with “slightly different contours of the opportunities and the risks" depending on who lands in the White House.

The Kremlin did not comment on the unfolding situation so far but the chairman of Russia’s Committee of Foreign Affairs in the upper house Federation Council Konstantin Kosachev said on Facebook that the election has demonstrated that the “foreign factor” was not to be blamed for any forthcoming results, referring to America’s long-standing accusations and “obsession” that Russia interferes in America's democratic processes, including the 2016 presidential vote.

Kosachev noted that Moscow is “benefiting from any certainty in which the losers won’t need to resort to [claims of] foreign interference”.

“It’s time for America to return to the politics of sanity, in which case we will always support it. It is high time”, Kosachev added.