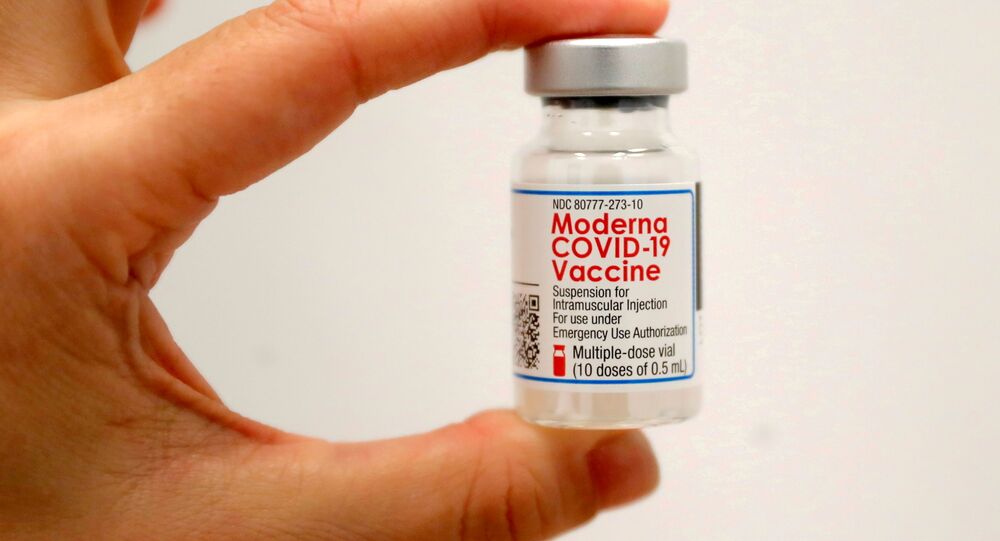 The NHS announced at the end of June that over 45 million Britons had received at least one jab against the coronavirus, while 33 million were fully vaccinated.

British health chiefs have discretely released a warning that the Pfizer and Moderna vaccines may cause heart issues, MailOnline reported. The outlet noted that the British medicines watchdog had updated its safety information to accept that the condition is a possible side effect of both vaccines, without making a formal announcement.

According to the Medicines and Healthcare Products Regulatory Agency (MHRA), complications are possible but rare and "typically mild", as the "vast majority recovered with simple treatment and rest".

However, several cases of cardiac issues have been confirmed among those vaccinated, with inflammation of the heart muscle finally listed as a potential side effect by the MHRA last week.

© REUTERS / STEPHANE MAHE
A medical worker administers a dose of the "Comirnaty" Pfizer BioNTech COVID-19 vaccine in a vaccination center in Nantes as part of the coronavirus disease (COVID-19) vaccination campaign in France, June 3, 2021

According to data collected by the watchdog, by 23 June 60 cases of myocarditis and 42 cases of pericarditis had been detected among Pfizer vaccine recipients, as Britain had administered 30 million doses. At the same time, the Moderna vaccine distributed among adults was followed by five instances of myocarditis and two of pericarditis (900,000 doses had been administered in the UK).

"Over 79 million doses of Covid vaccines have been administered in the UK, saving thousands of lives, and our advice remains that the benefits of getting vaccinated outweigh the risks in the majority of people", Dr June Raine, the MHRA's chief executive, stressed. "We have carefully reviewed reports of suspected adverse reactions involving types of heart inflammation known as myocarditis and pericarditis and we have concluded that the Covid vaccines made by Pfizer/BioNTech and Moderna may be linked with a small increase in the risk of these very rare conditions".

Cardiologists say the benefits of both jabs still clearly outweigh the risks for the vast majority of the population.

In the meantime, the Johnson and Johnson vaccine as well as the AstraZeneca jab have not been shown to increase the risk of myocarditis or pericarditis, but they are usually not offered to under-40s at the moment due to their suspected links to blood clots.