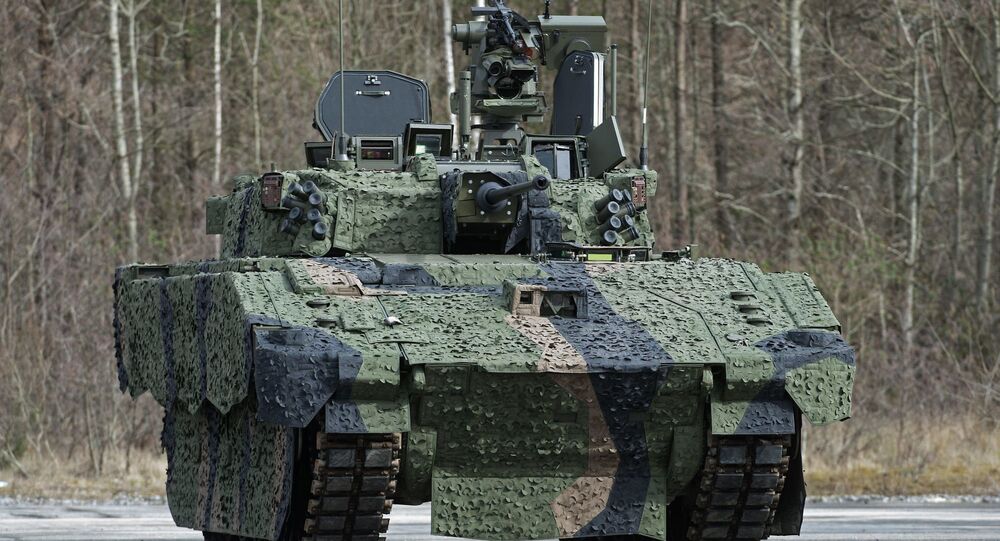 Late last month, Tobias Ellwood, chairman of the UK House of Commons' Defence Committee, argued that the problems pertaining to the Ajax tanks are "[…] just another example of the chronic mismanagement by the Ministry of Defence".

The new UK armoured fighting vehicle Ajax will pose security-related risks to its crew if this fully-digitised light tank is driven at more than 20 miles (32 kilometres) per hour, The Telegraph has cited a leaked government report as saying.

A fleet of Ajax vehicles was bought by the military for a whopping £3.5 billion ($4.9 billion)

The report, due to be published in July, claims that safety limitations on the Ajax light tanks include "speed restrictions of 20 mph" as well as "limiting time in the platform to 1hr 30 mins before crew change". The vehicle's maximum speed is 40 miles (64 kilometres) per hour.

The study also reportedly noted that the speed restrictions are understood to be caused by design flaws resulting in excessive vibrations that prevent the vehicle's cannons from being fired on the move.

This, in turn, results in the Household Cavalry regiment being unable to "conduct effective collective training on the platform", according to the report.

The study went further by arguing that due to the safety limitations, Ajax's current design means "the vehicle cannot reverse over an obstacle more than 20cm high".

"The review team were told there is a real risk exposing the Field Army to the platforms in their current condition will undermine their confidence in Ajax", the report ostensibly pointed out.

The Telegraph cited an unnamed defence source as saying that the British Army is "so embarrassed about having to admit it's failed, they won't do it".

Hear me out: Challenger 3 in Recce/Strike role. "Recce in Force".

According to the newspaper, trials of the Ajax were suspended from November 2020 to March 2021, after crews suffered swollen joints and tinnitus. Currently, all crewmembers are supposed to regularly have an ear test and wear noise-cancelling headsets inside the vehicle.

Tobias Ellwood, chairman of the House of Commons' Defence Select Committee, told The Telegraph that the UK Ministry of Defence (MoD)'s "land warfare procurement has been appalling and Ajax is the icing on the cake".

"It is the programme that everybody anticipated to be cut in the Integrated Defence Review, given the cost overruns and constant redesign, resulting in a tank so heavy it can't be airlifted by any RAF transport without taking chunks of it off. At 43 tonnes it's heavier than any tank in the Second World War", he said.

The view was shared by Francis Tusa, editor of the website Defence Analysis, who described the Ajax as "the poster child for failed procurement".

© CC BY-SA 2.0 / Defence Images / Challenger 2 Tank
UK Military Spends £800 mln on More Than a Hundred Challenger 3 Tanks
The MoD later underscored its commitment to the Ajax programme, adding, however, that "some training on the Ajax family of vehicles was paused as a precautionary measure".

"This is a normal measure for the demonstration phase of projects; an investigation, incorporating trials, is being carried out jointly with the manufacturer. It is inappropriate for us to comment further at this time. The health and safety of our personnel is of the utmost importance and we are committed to providing a safe working environment", the ministry added.

The Ajax programme was rolled out in 2010 and stipulated the delivery of 589 different variants of the sophisticated armoured fighting vehicle to the UK Army by 2017, a goal that is yet to be implemented.