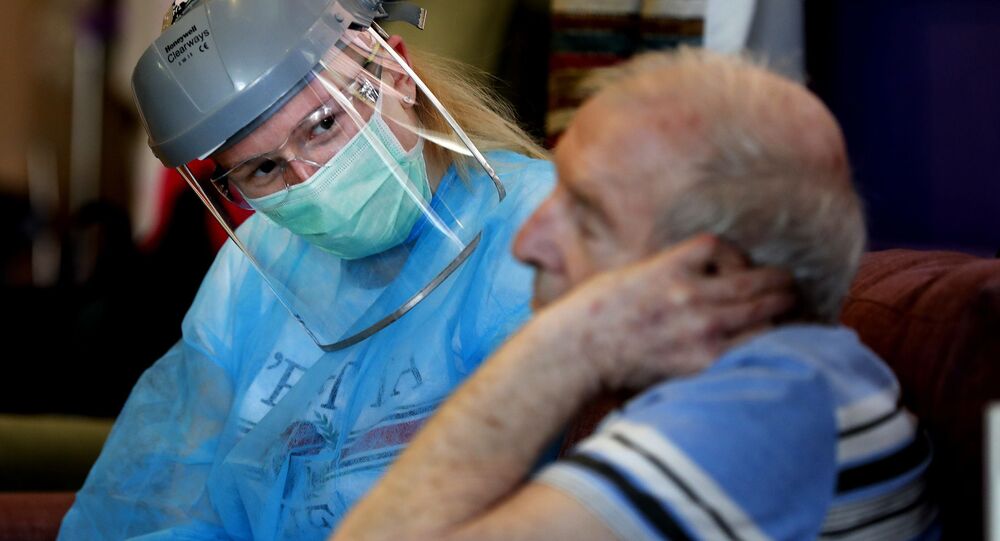 British Prime Minister Boris Johnson's former adviser, Dominic Cummings, has entered a second questioning session for a joint inquiry into the lessons to be learned from the response to the coronavirus pandemic.

In another explosive statement, Cummings told MPs that it was “complete nonsense that we put a shield around care homes". Cummings said the opposite happened, as "we sent people with COVID back to care homes".

"(Health Secretary Matt) Hancock told us in the Cabinet Room that people were going to be tested before they went back to care homes", he told parliamentarians.

"We only subsequently found out that that hadn't happened. Now all the government rhetoric was we put a shield around care homes and blah blah it's complete nonsense. Quite the opposite of putting a shield around the, we sent people with COVID back to the care homes", he added.

When questioned on why Downing Street didn't move quickly to shield care homes in light of the infectious outbreak of COVID-19, Cummings said:

"We didn't understand the catastrophe around people being sent back to care homes who were COVID-infected until April. We realised the lack of a shielding plan roughly speaking the week of the 9th [April]".

According to Cummings, COVID spread like wildfire in care homes and they didn't have the Personal Protective Equipment (PPE) they needed to deal with the crisis.

Cummings also told MPs that it took too long for the government to set up the Test and Trace system, meant to ensure that anyone with COVID symptoms gets tested quickly and trace people who have been in contact with a coronavirus-positive person.

Test and Trace began at the end of May 2020, which was too late and too difficult for the healthcare system to handle.

"It took too long to get it set up. The system was too distracted in April by the Hancock pledge".

Health Secretary Matt Hancock had earlier pledged to meet 100,000 tests by the end of April and claimed on 1 May the target had been met.

Jeremy Hunt asked Cummings if he would take responsibility for the delay in getting the Test and Trace system up and running.

"I blame myself for many, many, many things in this whole crisis. I said repeatedly from February/March, if we don't fire the secretary of state [Matt Hancock]... we are going to kill people and it is going to be a catastrophe".

Cummings also added that Hancock was fixated on the 100,000 target, and that he "interfered" with things in government "when the PM was on his deathbed", as Boris Johnson had tested positive in March 2020.

Cummings says he and the government's chief scientific adviser, Sir Patrick Vallance, told government officials not to do "what Hancock says", as the health secretary ostensibly instructed officials to hold tests back so he could hit his 100,000 target by the end of April.

Labour MP Rebecca Long-Bailey asked Cummings about who was prioritising the economy over lives lost to COVID.

© REUTERS / HENRY NICHOLLS
The City of London financial district can be seen as people walk along the south side of the River Thames, amid the coronavirus disease (COVID-19) outbreak in London, Britain, March 19, 2021

He suggested said the PM thought the lockdown would "completely destroy the economy".

One of the politicians who came out unscathed in the course of the inquiry was UK Chancellor Rishi Sunak, after Cummings rejected claims he was prioritising the economy over public health.

"The chancellor was totally supportive of me and other people in that transition from Plan A to Plan B", he said.

Cummings also accused Boris Johnson of failing to introduce an appropriate border policy after April 2019. The PM was afraid that a border policy would destroy the travel industry and called himself "the Mayor of Jaws".

Johnson had been referring to the 1970s film "Jaws", where the character of the mayor kept the beaches open despite the threat of a man-eating shark.

"To which of course some of us said 'there is not going to be a tourism industry in the autumn if there is a second wave'", Cummings said.

Even today, with the traffic light travel system in place, Cummings said the UK still doesn't have a "proper border policy".

Speaking on Wednesday, Boris Johnson's spokesman said that Downing Street "won't engage with every allegation made by Dominic Cummings".