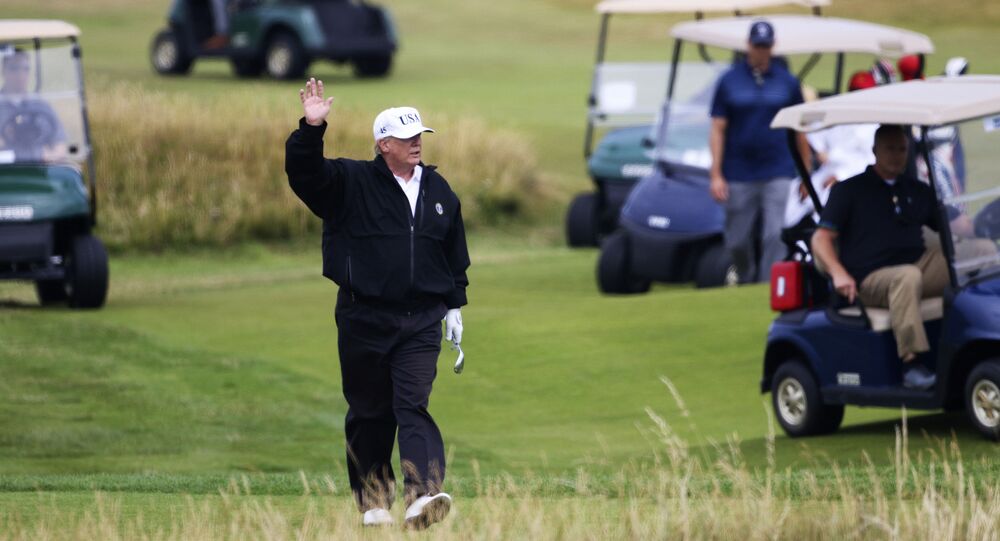 Janey Godley delivered her offensive message as the former president went to Scotland to inspect his Turnberry resort and golf facilities, vocally supporting those who had voted for Britain’s divorce from the European bloc days earlier.

Scottish comedian Janey Godley claimed she was “barred from travelling to America” after she welcomed Donald Trump, a US presidential candidate at the time, in the summer of 2016 with a profane sign reading that he is a “c***”, The Times of London reported.

"I'd love to go back now Joe Biden's in charge," she wrote for the British edition. "I've been barred from travelling to America since I welcomed Trump to Turnberry with that 'Trump is a c***' placard. You couldn't pay me to stay in that hotel, I wouldn't put a penny in the a**h***'s pocket", the 60-year-old woman went on.

She recalled her first trip to the US - to Florida in 1989, “with my daughter Ashley and the husband whose name I never mention”.

She said they stayed outside Orlando and visited the “utterly magical” Disney World.

As for protesting Trump’s 2016 visit, she recounted the experience in a blog post from 28 June 2016.

"I felt like sh** and was full of anger [over Brexit] and I caught a bus to Turnberry Golf course just to welcome Mr Trump who flew in from US", she wrote.

"I got out of the bus and stood proudly with my sign 'TRUMP IS A C***' the cops saw my sign and harassed me into folding it up".

In June 2016, Trump travelled to Scotland to visit his golf course and properties there, shortly after Britain had voted in a referendum to withdraw from the EU.

"Basically they took back their country", Trump offered his positive take on the matter, which appeared to hit a raw nerve with anti-Brexiteers. When he arrived in the country, a group of protesters showed up, Godley being among them.

"Look, if the pound goes down, they're going to do more business", he said at the time. "When the pound goes down, more people are coming to Turnberry, frankly", Trump speculated, further suggesting that the same scenario would sooner or later play out broader in Europe.

"People want to take their country back, they want to have independence in a sense, and you see it with Europe, all over Europe, and you're going to have more than just, in my opinion, more than just what happened last night", Trump said at the time.

On 23 June 2016, the UK voted to pull out from the EU by 52% to 48%. Leave won most of the votes of votes in England and Wales, while every Scottish council saw Remain majorities.