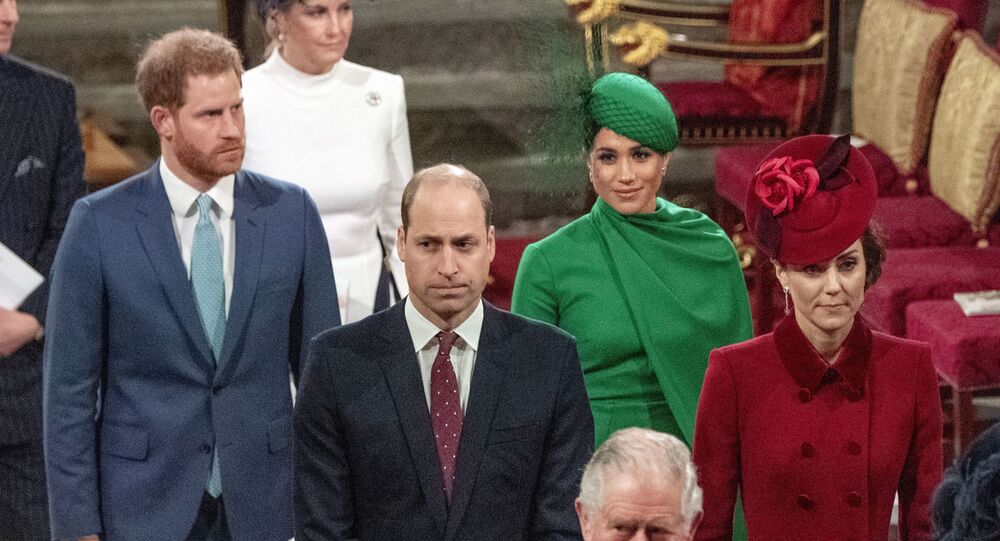 Following the Megxit fallout and the Sussexes' explosive interview with Oprah in March, the brothers' relationship has been increasingly fraught, despite having once been very close after the death of their mother, Princess Diana, in 1997.

As they follow the coffin, the Duke of Cambridge and Duke of Sussex, who will reportedly meet each other for the first time since Harry's relocation to the US, will be separated by their cousin Peter Phillips, a Buckingham Palace release states.

According to the funeral scenario, when the royal family enters in pairs, William will walk ahead of his brother as the coffin is carried into the chapel. Buckingham Palace reportedly did not provide any explanation for the change, saying only that it would not be "drawn into perceptions and drama," but that it had been approved by the Queen herself.

© AFP 2021 / BEN STANSALL
Members of the Kings Troop Royal Horse Artillery ride their horses away from Windsor Castle in Windsor, west of London, on April 15, 2021, following the April 9 death of Britain's Prince Philip, Duke of Edinburgh, at the age of 99.

This news follows the reports that the Queen approved a plan for all members of the royal family, including military obliged, to wear civilian clothes and dresses instead of the customary military uniform in a bid to show a united family front, amid concerns that Harry would be the only senior royal not in uniform, and Prince Andrew reportedly insisting on wearing an admiral's uniform.

© AP Photo / Frank Augstein
None of the UK Royal Family to Wear Military Uniform at Prince Philip's Funeral - Report
The Queen, like the other 30 guests invited to the funeral, will wear a face mask and sit alone in the quire of Windsor Castle's St. George's Chapel, with all mourners adhering to COVID-19 guidelines and remaining socially distant, according to the Daily Mail.

Although the Queen will be accompanied to the service by a lady-in-waiting, a servant handling among others, the monarch's private and personal matters, the latter will not be included in the list of 30 guests.

The duke's coffin will be lowered into the royal vault in front of the guests during the funeral ceremony, which will be performed by Dean of Windsor David Conner.

The procession is reported to start at 11 am local time and the whole ceremony is expected to end around 3 pm.

Prince Philip, Director of his Funeral

The Duke of Edinburgh, who died last Friday at the age of 99, was the driving force behind his funeral arrangements, and buglers from the Royal Marines will sound Action Stations during the service, representing his long association with the Royal Navy.

The UK media also reported that Philip insisted on inviting his relatives from the German side of the family, although they were not invited to attend the funeral of his father-in-law, King George VI, in 1952, largely in connection with the recent war.

© AFP 2021 / STEVE PARSONS
The Land Rover Defender that will be used to transport the coffin of Britain's Prince Philip, Duke of Edinburgh during the funeral procession is parked in Windsor Castle, Windsor on April 14, 2021.

Philip had overseen his personal project of building a Land Rover pick-up hearse, as he requested a repaint in military green and designed the open-top rear and special "stops" to keep his coffin in place. The project spanned 16 years, with final adjustments to it reportedly made in 2019 by the duke himself.

The hearse will be flanked by pall bearers who will represent his military connections, including the Royal Marines, Regiments, Corps, and Air Stations.

Also revealed today is that Philip hand-picked the regalia that will be placed on the altar at his funeral.

The medals and decorations bestowed on Philip by the United Kingdom and Commonwealth nations, as well as his Royal Air Force wings and Field Marshal's baton, will be pre-positioned on nine cushions on the altar in St. George's Chapel.

© AFP 2021 / KIRSTY O'CONNOR
The Order of Australian Knight, the Order of New Zealand, the order of Canada, the Canada Order of Military Merit, and the Papua New Guinea Order of Logohu conferred on Britain's Prince Philip, Duke of Edinburgh are seen on show at St James's Palace in London on April 12, 2021.

In a nod to his birth heritage as a Prince of Greece and Denmark, the duke also included insignia from Denmark and Greece, the Order of the Elephant and Order of the Redeemer, respectively.